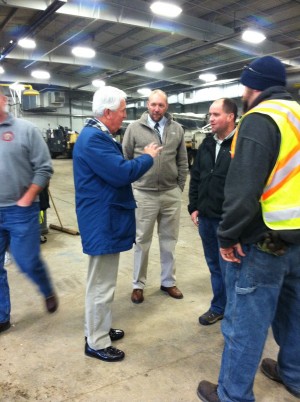 OHIO – Ohio Department of Transportation (ODOT) Director Jerry Wray met with several agency employees to thank them for their dedication to keeping roadways safe and to offer safety tips to motorists prior to the latest wave of snow storms to hit the eastern parts of state.

“Not many people would roll out of bed at two or three in the morning to get behind the wheel of a snowplow, load up with a ton of salt and head out onto the roadways to make sure they are safe and passable for the motoring public,” said ODOT Director Jerry Wray. “But those are the people who work for ODOT and I certainly appreciate the work they do to keep our families safe.”

Wray also took the time to inform motorists that ODOT snowplows average about 35 to 40 miles per hour while clearing snow and ice from state highways.

“Slow down. Leave plenty of room for snow plows. Let them do the job we need them to do and that will help everyone get to where they need to go, safely,” Wray said.

Wray also provided tips on items motorists should have with them when traveling in winter weather:
· Fully charged mobile phone with emergency numbers
· Drinking water
· First aid kit
· Non-perishable snacks
· A bag of abrasive material such as sand or salt
· Snow shovel or ice scraper
· Blankets and warm clothing

The weather has packed quite a punch this winter resulting in one of the most active snow and ice fighting seasons on record for ODOT. To date, the department has used 620,643 tons of salt to keep motorists safe on Ohio roadways. Compare that to just 252,337 tons of salt used up to this same point last year and 370,450 tons of salt for the entire winter season just two years ago.