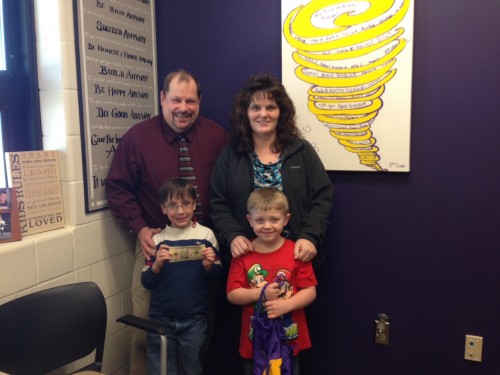 Organizers cited conflicts with the make-up date from when the game was snowed out February 15 and the 60 degree weather Saturday as reasons for the lower turnout in the stands.

“We are happy to say we still raised money that can help a Southern student with college expenses,” said Scott Wolfe, one of the event organizers. “Thanks to those who turned out to support the cause, and thanks to everyone who either participated or helped in any way. Also, “Thank you” to Home National Bank for putting on the cash scramble and being part of this hometown event.”

“We achieved the objective of raising some money for the kids, and everyone had a great time.”

The Purple Tornadoes consisting of graduating classes of odd number years held a slight edge at the half, 23-22. About midway through the second half, the purple team opened up the spread and scurried to a 58-49 victory. The Purple Tornadoes were le by Patrick Johnson with 19, Arnie Dugan 14, Weston Roberts 11, seven each from Ryan Norris and Jamie Evans, and Kevin Ihle had five. The Golden Tornadoes (Even-year Graduates) were led by Roy Lee Bailey with 17, Butch Marnhout 11, Chad Hubbard 9, Dustin Salser eight, Kenny Turley four, and Daniel Otto two.

In the Ladies’ game Courtney Thomas had 43 points and Katie Sayre 21 to lead the gold to the 64-49 win. The purple team was led by Melanie Weese with 21 points, Tonja Salser Hunter 15, and Diana Simpson Bissell ten points.