He was born October 6th, 1928 near Jeffersonville Ohio. John was the son of Oyer and Rose (Haaga) Williams.

John is survived by his wife Reeda (Everhart) Williams who he married April 21st 1993. In addition to his wife, he is survived by his daughter Leslie Backus (David) of Delaware OH and his son John D Williams (Teri) of Williamsport OH; a step-son Mark Everhart (Carla) of Boise ID, step-daughter Lora Dunn (Joe) of Lawrenceville GA; two granddaughters, Jessica L Williams (Chris Miller) of Grove City OH and Amy N Williams of Williamsport OH; two step-grandchildren Justin Everhart (Brittany) of West Milton OH and Jalaina Everhart of Troy OH. John was preceded in death by his daughter Lynn A Williams (Goff) 2006 and a step-son David Everhart (2011).

John graduated from Atlanta High School in 1946 (Pickaway Co, OH) and served in the U.S. Air Force after graduating. Upon his return from his service, he operated a grain and livestock

farm in Pickaway Co. where he was living until his retirement from Kenworth Truck Co. in Chillicothe, OH in 1990. He relocated to Gallia Co. with his wife Reeda in 1993 to live on land which has remained in the family since being settled in about 1815.

John was a member of Twin Rivers Kingdom Hall in Gallipolis OH. And has many dear and cherished friends from his attendance there.

John enjoyed hunting with his English Setter dogs and Browning guns. He restored and collected antique cars. He also enjoyed woodworking, and being in the woods to cut firewood.

John also enjoyed raising a garden, making cider and wine and grinding his own cornmeal. His most beloved pastime was spending time with his family and friends. 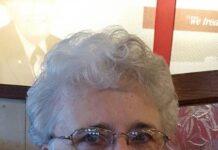