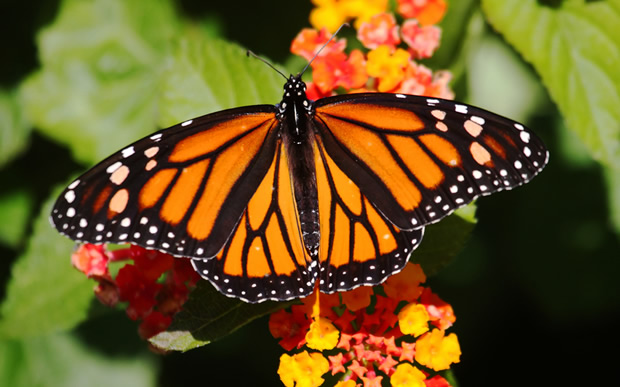 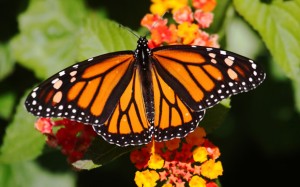 Are Monarch butterflies the next Passenger Pigeon?

About 150 years, people across the country noticed the shrinking number of passenger pigeons and decided to take action. They wrote to their legislators to ban unregulated “market hunting,” and school children across the country saved their pennies and milk money to buy giant swaths of northern forests that provide nesting habitat for the huge flocks of birds that occasionally darken the sky to this day.

Of course you don’t, that’s because none of this happened, and the passenger pigeons went extinct, and the huge flocks will never be seen again.

But what if they HAD taken action? Could they have saved the passenger pigeon?

The passenger pigeon, not to be confused with homing or carrier pigeons, was a species native to North America that once flew in flocks so thick that they reportedly darkened the sky for hours or even days as they passed. The last passenger pigeon killed in the wild was “Buttons,” shot in Pike County, Ohio in 1900, then mounted and given buttons for eyes. The last surviving passenger pigeon, “Martha,” died on Sept. 1, 1914 at the Cincinnati Zoo.

The passenger pigeon was a victim of unregulated market hunting in the 1800s (including the use of explosives to down entire nesting colonies) and the destruction of huge northern forests where they nested. In short, they were killed faster than they could reproduce, and those places they reproduced were destroyed. According to some, the extinction of the passenger pigeon initiated the “modern” conservation movement.

This brings us to the Monarch butterfly. You are probably familiar with the Monarch, the familiar orange and black striped butterfly that is synonymous with summertime and with the milkweed plants it relies upon for food and breeding. Monarchs are migratory and the entire summertime population of the eastern United States returns to central Mexico and spends the winter in an area comprising only 1,800 square miles.

Monarch butterfly populations are in decline, and have been for the past 20 years, and people are noticing. The cause of the decline is also known: illegal clear-cutting of habitat in Mexico where the butterflies spend the winter; recent bouts of severe weather (particularly droughts in Texas); and decline of habitat in the United States, more specifically herbicide destruction of milkweed plants in the United States.

The question is what, if anything, will be done to address it. On that subject there is no consensus, and plenty of finger-pointing to go around. Paradoxically government agencies are in a sense competing against themselves.

Ironically it is an environmental policy of one agency promoting the use of ethanol that indirectly encourages putting land into production that was formerly set aside for conservation (allowing the milkweed needed by Monarchs and many other species to flourish), and most of all gives us polluted lakes and rivers, and bad gasoline that ruins small engines, lawnmowers, outboard motors and motorcycles (but that is another subject).

Another agency pays subsidies to producers for growing corn for ethanol, while at the same time paying producers to set aside land for conservation (but not as much as they get for producing).

Other agencies are directly interested in preserving the Monarch butterflies.

Local Soil and Water Conservation Districts across the country may actually be caught in the middle. SWCD are big proponents of no-till agriculture, which reduces soil erosion and protects water resources, but the herbicides used in no-till farming are deadly to practically any plant that not is not “Round-Up Ready.”

Perhaps the key word we need to remember is “conservation,” which advocates a wise use of natural resources. While SWCDs encourage the use of no-till agriculture to protect topsoil and reduce erosion, they also advocate voluntary conservation practices such as filter strips and buffers, native prairie plantings, and other management practices which help keep topsoil, pesticides, fertilizer and nutrients, and herbicides out of streams while also providing valuable wildlife habitat.

Individual states are also taking action by encouraging landowners to hold off on field mowing and mowing fringe areas, including roadsides, until after the Monarch butterflies are finished breeding.

As a landowner what can you do? At home you can create monarch habitat by planting a butterfly garden, or by limiting mowing (especially areas with milkweed) during the late summer months when Monarchs are preparing to migrate. I advocate mowing “in thirds” or leaving some areas un-mowed each year to provide habitat for birds and other critters.

As a society another question we have to ask ourselves is, do we consider the Monarchs valuable in their own right, as canaries in the coal mine, or are they nothing but victims in the march of progress?

I guess time will tell if Monarchs survive or if they too go the way of the Passenger Pigeon.

Jim Freeman is the wildlife specialist for the Meigs Soil and Water Conservation District. His column, In the Open, generally appears every other weekend. He can be contacted weekdays at 740-992-4282 or at jim.freeman@oh.nacdnet.net