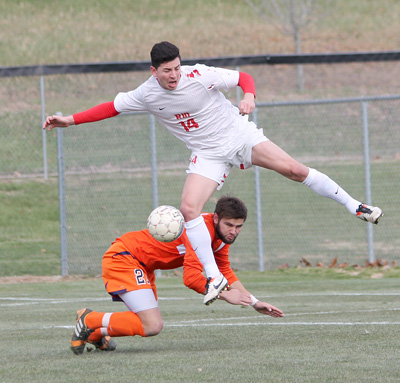 KANSAS CITY, Mo. — The University of Rio Grande was ranked No. 5 in the 2015 NAIA Men’s Soccer Coaches’ Preseason Top 25 poll released earlier this week by the national office.

The RedStorm tallied 389 points in the balloting of a panel of head coaches representing each of the conferences, independents and unaffiliated groups.

Head coach Scott Morrissey’s squad, which spent much of the 2014 campaign as the country’s top-ranked team, has garnered at least one top five ranking in each of the past three seasons and four out of the last five overall.

The RedStorm, who open their season on Saturday night at Taylor University – which was among the schools receiving votes in the poll – also rank second with 46 all-time No. 1 rankings.

Davenport (Mich.) begins the new season as the top-ranked team on the list after the Panthers earned their third-ever top billing in school history with all 17 first-place votes and 467 total points. Davenport won its first-ever men’s soccer national title with a 2-1 come-from-behind overtime victory against Texas at Brownsville last December.

Fellow Wolverine-Hoosier Athletic Conference (WHAC) member Northwestern Ohio drops in at the No. 2 position. The Racers, who advanced to the semifinals of the 2014 national championship, compiled 428 total points. The ranking is the highest in program history.

Since the 2014 Postseason Top 25 edition, No. 13 Georgia Gwinnett improved the most within the poll moving up six spots. Conversely, No. 15 Ashford tumbled down six positions.

The first regular-season Top 25 Poll will be announced on Sept. 22.