By Whitney Thoene, Special to the Meigs Independent Press 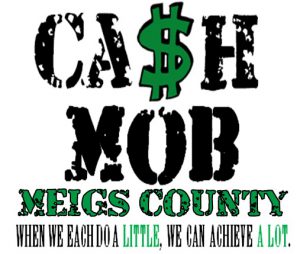 POMEROY – Want proof that if everyone does a little, we can do a lot? Come out Tuesday, August 2 from 4-6 p.m. to Front Paige Outfitters for the first local Cash Mob. This is the latest part of the Meigs County Chamber of Commerce’s Love Meigs, Shop Local Campaign.

A Cash Mob is based on a flash mob–people show up at a designated place and time, except they are not expected to sing and dance. Instead, people are encouraged to spend at least $10 at the store. If even half the community comes out and spends a little bit of money, it can have a huge impact on the business. The Cash Mob also promises to be a great time to socialize.

“It is a new event that’s a little different. It gives people a chance to check out what we have to offer while support the local business community,” Paige Cleek, owner of Front Paige Outfitters. “We’re hoping to ‘mob’ a different business each time and turn this into something fun and exciting for everyone.”

There will be several exclusive Cash Mob deals that will only be available during the event (4-6 p.m.) as well as drawings for the “mobbers.”

“We want everyone to see that every little bit helps. Whether it is for five dollars or hundred dollars, every purchase impacts our small businesses,” stated Lori Miller, Chamber President.

Small businesses are essential to the community and it is important to support them year round. The Cash Mob is a fun event that will showcase a different store each time.

Front Paige Outfitters sells a variety of items including clothing for women and men, accessories, and boots. FPO has Levi’s, Carhartt, Life Is Good, Georgia Justin Boots and Red Wing.

If you have any questions about the Cash Mob, the Love Meigs, Shop Local campaign, or the Chamber of Commerce, call 740-992-5005.

Tuckerman’s Too opens in Pomeroy