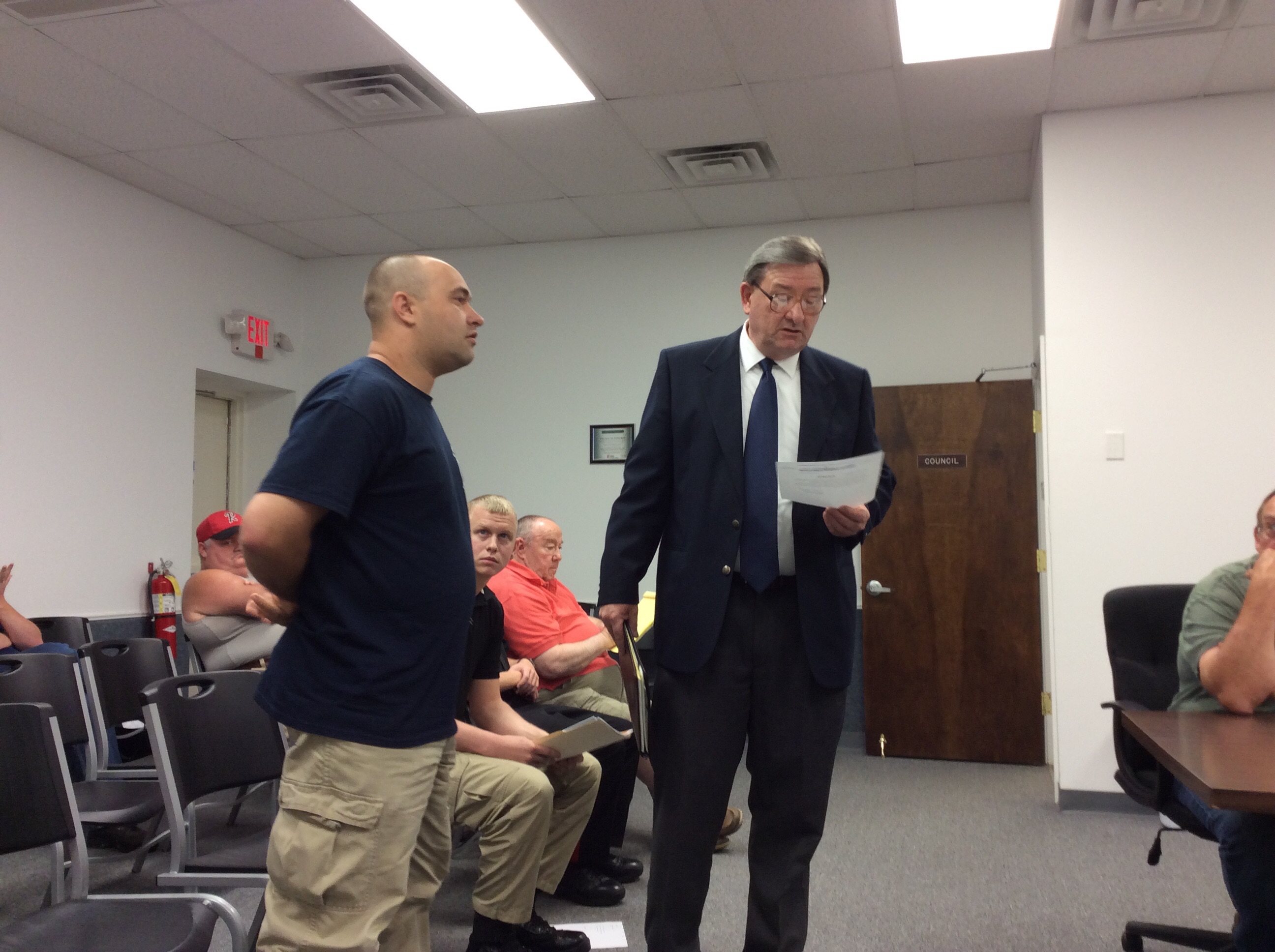 POMEROY – Two government agencies are looking into exactly what has been happening with a Pomeroy Police Officer placed on “permanent suspension” by Chief Mark Proffitt.

The Ohio Civil Rights Commission has several ongoing investigations into the civil rights violations reportedly perpetrated by Chief Proffitt to then Officer Bradley Larsen. The multiple investigations are currently moving forward as the Ohio Office of Unemployment Compensation has also been looking into the “permanent suspension” of Larsen. Both agencies are involved along with the filing of an appeal in the Meigs County Court of Common Pleas by Larsen represented by attorney, Daniel H. Klos. Larsen had been working at the Pomeroy Police Department for a year and a half without warnings or write-ups according to paperwork obtained by the Meigs Independent Press, having been hired on the department in January 2015.

Larsen was was first placed on “permanent suspension” which was changed to a five day suspension by Chief Proffitt the first time on July 1, 2016 following a Pomeroy Council meeting. Larsen had been off work for five days. The first suspension was related to issues Larsen had begun having with Pomeroy Police Officer Andrew Quine. Larsen had questioned some of Quine’s practices and then began having issues with the chief.

The Meigs Independent Press has had several reports from citizens of Pomeroy and those visiting the village that have been pulled over by Quine with him checking their tire pressure and even received tickets for low tire pressure. He has also been seen sitting well outside of Pomeroy jurisdiction in Minersville to pull people over. (This information was passed along to Pomeroy Mayor Bryan Shank. Several of those with tickets informed the Meigs Independent Press the tickets had been basically dismissed by the mayor. Mayor Shank has had several issues with Chief Proffitt, but those issues have been raised behind the closed doors of executive session of the Pomeroy Council.)

Quine has recently been promoted by Chief Proffitt from acting Sargent to acting Lieutenant, but at the time was listed as a Sargent in the paperwork. According to the paperwork filed by Chief Proffitt (transcribed as written in the document), “This investigation and Suspension stems from a complaint brought to me by Sgt. Andrew Quine on June 2nd, 2016 for post on Social Media, for acts unbecoming an officer. For Activity inappropriate and of a Sexual Nature. Per this our earlier conversation on this matter in Early June, this is Insubordination and will not be tolerated.”

This “permanent suspension” was then overturned by the Pomeroy Village Council and recorded as a “5 days” suspension. The social media posting was a crude posting making fun of then Sgt. Quine. It was later determined that Larsen had not been the person who had created it and posted it to social media.

Within 24 hours of the first suspension still dated July 5, 2016, Chief Proffitt filed another suspension on Larsen which was immediately dismissed by Pomeroy Mayor Bryan Shank.

The issues related with the second started after Larsen and his wife, Jessica, were seen talking with Mayor Shank about some practices of Chief Proffitt within the department including full-time employment hours. According to a statement submitted by Larsen’s wife to the council giving an account of events leading to the up to the suspension, she waited outside of the mayor’s office and could hear Chief Proffitt yelling at the mayor. During that conversation, she said in the statement she heard the chief raising his voice stating, “I’m the damn chief I can override the policy manual and do as I wish and I don’t have to prove nothing to no one.”

It was then Chief Proffitt informed Mayor Shank about the second alleged complaint against Larsen from another officer, according to the statement. After Larsen and his wife were free to go, they returned home. Within 30 minutes of them being home, the code enforcement officer knocked on their door stating a complaint had been made about a diaper being thrown over a chain link fence in their yard, however, there is no fence in their yard. The officer also mentioned a sofa on their back porch which the Larsen’s maintain was there when they moved into their current residence. No citation was issued. Almost immediately after that, Larsen was informed by another officer that his shift time had been switched. When Larsen was back at work, he had been on shift for about two hours according to the statement when Chief Proffitt called Larsen “into his office and tell him that based on what another officer said against him that he was suspended.”

According to the statement from Larsen’s wife this was done despite, the off duty dispatcher and others stated nothing wrong had occurred, Chief Proffitt moved forward with “permanent suspension”. All of this is included in the statement submitted to council.

In documentation obtained by the Meigs Independent Press (and transcribed as it is written), Chief Proffitt filed paperwork again dated July 5, 2016 for a “permanent suspension” of Larsen, citing an alleged incident from June 29, 2016. In it Chief Proffitt alleges, “On this date and time it has been reported you made contact via telephone with the on duty Patrolman Tre’ Wallace and advised him to respond to the levy on the Pomeroy Park Lot in an emergency manner for a physical altercation taking place. It was later found by the on duty officer this was a false report. Several Policy and Criminal Violations took place including those listed above. It was reported that you where intoxicated when this incident took place, that there was open container of alcohol present, this conduct is unbecoming an officer. Per our conversations on June 20th, 2016 in the presentence of Mayor Shank where you denied most allegations and on July 1st, 2016 in the presence of Capt. Webster in which you admitted the truth of the allegations, this behavior can not be tolerated within the Pomeroy Police Department and the Village of Pomeroy, and you are being placed on Permanent Suspension.”

This suspension was overturned and Chief Proffitt filed a third “permanent suspension” that left details of the alleged incident out of the documentation. This third suspension was the one denied appeal by the Pomeroy council. Council President, Phil Ohlinger, made the motion to uphold the suspension at the last council meeting. Council members Don Anderson, Victor Young and Mo Hennessy voted to uphold the “permanent suspension” while council members Ruth Spaun and Nick Michael abstained from voting.

An investigation into the violation of Larsen’s civil rights began with with issues on June 30, 2016. In the report, act of discrimination is listed as retaliation. According to the documentation the first alleged violation with an incident where Larsen stating, “On June 30th 2016 in the Mayor’s Office during a meeting the Chief walks in and threatened to suspend and/or fire me stating was don and the following day on July 1st 2016 two hours after starting my shift the Chief told me I was suspended and never gave me paperwork, a return date, nothing.”

The next incident under investigation dates from July 6, 2016 stating, “The evening that the Mayor and the town council overturned my suspension on July 5th 2016 the following evening on July 6th the Chief of Police calls me in at 5:30 p.m. and has two write ups (one which was for the suspension that got overturned) and another and tried suspending me again. The Mayor yet again has overturned the suspensions but is a witness that since speaking with him I have been retaliated against, harassed and the Chief has created a hostile work environment for me.

The third incident is dated August 7, 2016. It states Larsen was called on August 4, “by the Mediator stating my employer wanted to do mediation. I stated to the Mediator that I’d prefer an investigation based on my employer violating the previous mediation attempts.”

Larsen was placed on “permanent suspension” on August 7. The report also says Larsen believed it was, “Retaliation because I filed the first charge of retaliation, harassment, and hostile work environment.”

A fourth incident is currently being handled by the commission stating, “In January of 2015, I was hired by the Respondent (Chief Proffitt) as a Police Officer. On July 1, 2016 I was suspended by the Chief of Police due to a meeting I had with the Mayor about work. The Chief on June 30, 2016 threaten to suspend me/and or fire me for talking to the Mayor. I believe that I was retaliated against because I participated in a protected activity in violation of Title VII of the Civil Rights Act of 1964, as amended.”

All four alleged civil rights violations are being investigated by the commission at this time. All of them name the chief as the one allegedly violating Larsen’s rights.

In addition to the involvement of the Ohio Civil Rights Commission, the Office of Unemployment Compensation has made a determination in Larsen’s filing for unemployment. According to paperwork obtained by the Meigs Independent Press states Larsen was discharged by the Village of Pomeroy on August 13, 2016 stating, “The employer failed to establish negligence or willful disregard of the rule on the part of the claimant (Larsen). Ohio’s legal standard that determines if a discharge is without just cause is whether the claimant’s acts, omissions, or course of conduct were such that an ordinary person would find the discharge not justifiable. After review of the facts, this agency finds that the claimant was discharged without just cause under Section 4141.29(D)(2)(a), Ohio Revised Code. The claimant was given a disciplinary layoff from Village of Pomeroy on August 14, 2016. Facts available do not establish misconduct in connection with work. In accordance with Section 4141.29, Ohio Revised Code, this disciplinary layoff has been determined to be non-disqualifying.”

The Meigs Independent Press broke the story of Larsen’s filing with the Meigs County Court of Common Pleas on Monday. Documents included in the appeal include the “permanent suspension” filed by Chief Proffitt on August 14, 2016 and reads, “I placed Ptl. Brad Larsen on permanent suspension, without pay, for several violations of the Policy and Procedure Manual. I did at the time of suspension advise Larsen of the chain of events which led up to his suspension. It is my recommendation and request that Ptl. Larsen be terminated from employment in reference to Ptl. Larsen’s suspensions. I may suggest that you contact the Village Law Director for your legal response for this action.”

This is not the first time that Chief Proffitt has had the procedures of his office questioned or faced legal action. Multiple Pomeroy Police Officers have filed various actions or left with questions surrounding their department from the department and Chief Proffitt’s handling of the department through the years including John Kulchar, Kyle Calendine, and Alan Queen. In the Spring of 2014 numerous citizens brought forward a petition with 181 signatures that was presented to council concerning allegations of police harassment by the Chief Proffitt’s department..

More information on this developing story, will be updated as it is available.