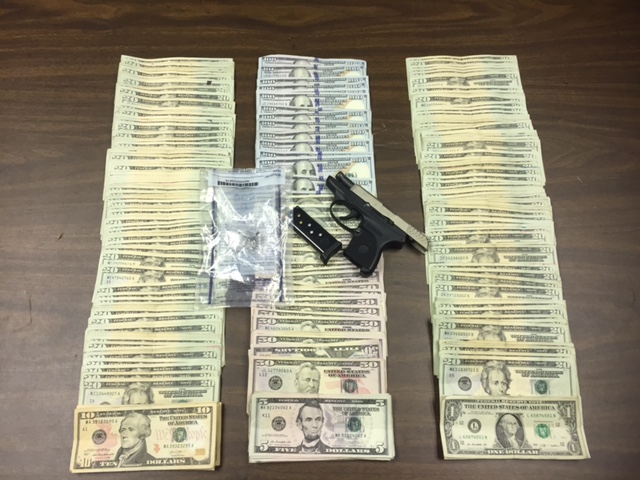 POMEROY – A routine patrol stop by deputies has allegedly turned up drugs, firearm and cash.

Sheriff Wood reports that Meigs County deputies, while on routine patrol on US 33 near the SR 7 intersection stopped a car driven by Justin W. Bradley, 23, of Alderson, West Virginia for an alleged moving violation. While speaking with Bradley the deputy questioned him if he had any items that he should know about in the vehicle. Bradley allegedly disclosed to the deputy that he had a firearm in the vehicle and deputies were able to locate a loaded .380 Ruger Pistol in the front compartment of the motor vehicle. Upon further search of the vehicle a small amount of drugs was located and $7,500 in cash was located in the trunk of the vehicle stored in two separate locations according to the sheriff’s report.

Task Force Agents along with deputies interviewed the two adult occupants of the vehicle and conferred with Meigs County Prosecuting Attorney Colleen Williams concerning the case. Bradley was arrested on a charge of having a concealed weapon, a fourth degree felony and was cited for driving under suspension. He was taken into custody and incarcerated in the Meigs County Jail awaiting a court appearance.

Task Force Agents also served Bradley and the other adult occupant of the vehicle with an Intent to Forfeit notices on the firearm and the $7,500 in monies. It was also noted by Sheriff Wood that two small children were in the motor vehicle at the time the offenses were committed. The name of the other adult in the vehicle has not been released.