Editor’s note: The Meigs County Sheriff’s Office Deputies respond to all sorts of calls. The notebook is a listing of the public record of those calls. 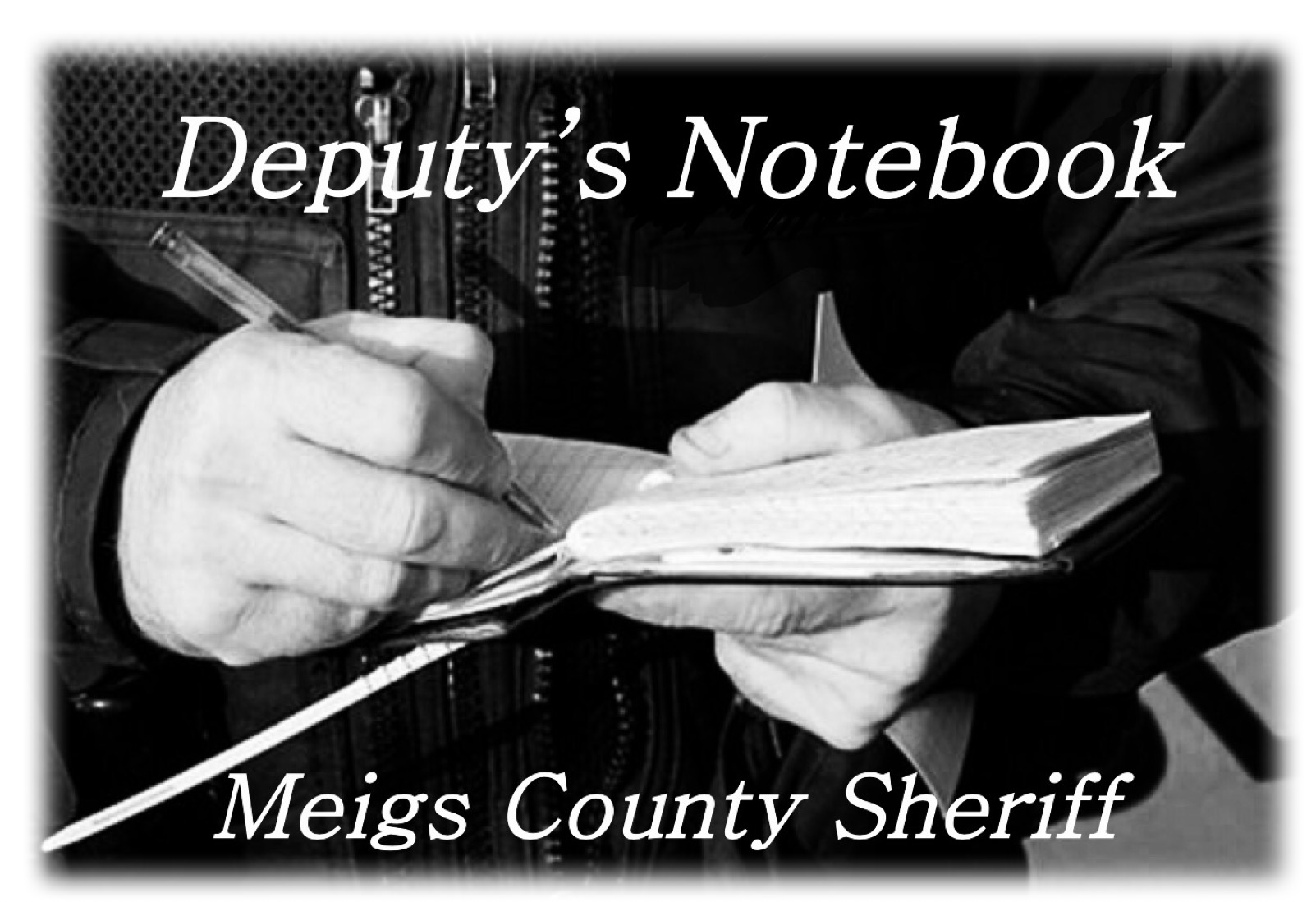 On January 2, 2017 the Sheriff’s Office responded to a call concerning an incident with a hammer being used on a person.

Aggravated Burglary: Deputies responded to 36259 Paulin’s Hill Road in reference to a call concerning a possible man with a knife. On deputies arrival, DeAngelo Thompson had fled the scene after assaulting the boyfriend of his ex-wife. Thompson and the new boyfriend had gotten into a fight after Thompson allegedly entered the home of his ex-wife by kicking in the door. The boyfriend, then fearing for his as well as the female involved safety, then struck Thompson with a hammer to the back of the head. Thompson was then located at a residence in Middleport and transported to Holzer Emergency Room. He was later transported to Grant Medical Center. This case is being turned over to the Meigs County Prosecutor’s office for Grand Jury consideration, according to the Sheriff’s Office.

On January 3, deputies dealt with recovering stolen items and dealing with a domestic dispute.

Receiving Stolen Property: Sgt. Jones responded to 65904 SR124 in Reedsville in reference to stolen marine batteries. The stolen items were recovered the next day and a warrant for the suspect was issued.

Dispute: Deputy Stacy and Sgt. Jones responded to Bigley Ridge in reference to a family dispute between Clell LaBonte and April Smith. On the deputies arrival, Smith had left with her children and went to a friend’s house. No charges filed.

Deputies encountered more domestic disputes and a vehicle pursuit among other calls on January 4.

Domestic Dispute: Deputies responded to a call that was received from the Gallia County 911 advising they received a public service from Katie Allman, 26564 Price Strong Road, advising that her and her mom, Angela Allman, 35, from Vinton, were fighting and Angela had been drinking. Prior to deputies arriving on the scene, the suspect, Angela Allman, cut a court ordered ankle monitor off and fled the scene. Angela Allman turned herself in the next day.

Vehicle Pursuit: Deputy Babb attempted to stop a suspicious vehicle on State Route 684 between Pageville and Harrisonville. The driver finally went into a driveway at 39270 State Route 684. At which time the driver allegedly jumped out of the vehicle and ran into the woods. The passenger, Michael King, 26, from Pomeroy was arrested and he advised the male that took off on foot. The vehicle was towed from the scene. CORRECTION: The driver was incorrectly identified by law enforcement in this as being Matthew Durham. It was a mistake on their part. Matthew Durham does not have a warrant or a suspect in this matter.

Traffic Stop: Deputy Perry stopped Kimberly Hill-Hott, Columbus, on US 33 at Bashan Road and issued a citation for 83 miles per hour in a 55 mile per hour zone.

Motorist Assist: Dispatch received a call about a vehicle in the roadway on State Route 124 near Langsville. Deputy Perry responded to the area and located the vehicle. The vehicle had run out of gas. Deputy Perry remained on scene until the driver returned, and got the vehicle running.

Traffic Stop: Deputy Snoke stopped Douglas Konidaris, Rossford, Ohio, on US 33 and Portland Road and issued citation for going 73 miles per hour in a 55 mile per hour zone.

Traffic Stop: Deputy Snoke stopped Robert Daniels, Rocky Mountain, Virginia, on US 33 at Bashan Road and issued a citation for 64 miles per hour in a 55 mile per hour zone.

Social Media: Deputies have noticed several public social media posts about people being run off the road or put in danger by reckless drivers along the stretch of US 33 from Five Points area to the Ravenswood Bridge. Deputies will be increasing their presence along this area. In addition to the citations listed above there have been three other traffic stops where verbal warnings were issued. Reckless driving is one of many types of dangerous driving that could cause an accident and subsequent injury to those involved. Forms of reckless driving include disregard for road safety procedures, drunk driving, and distracted driving. This could result in personal injury that affects all involved and these injuries could range from mild to life-changing. In such a situation, victims will seek consultation from a lawyer similar to personal injury lawyer Mark Rees, who may be able to help them with their case obtaining compensation for their injuries. To prevent any serious accidents it is requested that everyone who has any issues with reckless drivers is asked to report them to the Meigs County Sheriff’s Office at 740-992-3371.

Deputies arrest a couple of wanted persons and respond to an alarm at a residence on January 5.

Wanted Person: Deputy Jones arrested Sarah Wood who was a wanted person out of Athens County after stopping a vehicle she was riding in at the 124 Mart on State Route 7.

Traffic Stop/Wanted Person: Sgt. Patterson and Deputy Perry assisted Middleport Officer Lt. Pitchford with a traffic stop on a vehicle that had four occupants. After a check was ran on one of the females it was determined that she had a warrant from Meigs County Court along with a warrant from the Middleport Police Department. Deputy Perry arrested Michele Jones and transported her to the Middleport Jail where she was incarcerated pending her court appearance. All other occupants were taken to Middleport Police Department and turned over Lt. Pitchford.

Transports: Deputies transported two prisoners to court for hearings and transported one female to prison.

On January 6, deputies responded to an alleged assault.

Assault: Deputies responded to the Ramsey residence on State Route 124 in Minersville in reference to a reported stabbing. Deputy Chris Jones arrived on scene and contacted the alleged victim, George Ramsey. Ramsey had a knife wound to the face and was being transported by squad the Holzer Meigs ER. Deputy Jones spoke to witnesses at the scene who advised the alleged suspect, Justin Middleswart, 38, from Portland, had allegedly stabbed George Ramsey in the face then left the scene in a gold Buick. After checking several locations that deputies were advised that Middleswart may have been, he was located and taken into custody at a residence on Bald Knob Stiversville Road by Sheriff Wood, Deputy Jones, and Deputy Babb. He is currently in jail awaiting a court appearance. Also, while looking for Middleswart on Bald Knob Stiversville Road, Deputy Babb identified a subject with an outstanding warrant in Belmont County, unrelated to the case being investigated. The Belmont County Sheriff’s Office was contacted and advised that they did want that suspect. He was taken into custody and will be held in jail for Belmont County Sheriff’s Office.

Traffic Stop: Deputy Myers stopped Terrel Moore, Michigan, on US 33 at Bashan Road and issued citations for driving 83 miles per hour in a 55 mile per hour zone and driving under suspension.

On January 7, the deputies dealt with an alleged theft and continued to handle traffic stops.

Theft: Sgt. Patterson took a report from Michael Stahl, who reported the theft of a homemade hunting blind from property on Tower Road. The last time the blind was used was on December 18, 2016. When they attempted to use it on January 6, 2017, it was missing. The blind was described as a stick built blind, mounted on a tandem axle 5×12 trailer. The blind has light blue vinyl siding, white trim, peaked roof with black shingles, and windows on each side. It is bolted to the trailer, and the blind and trailer together is approx. 12′ to 15′ in height. Anyone with any information is asked to call 740-992-3371.

On January 8, deputies were dispatched to a single car crash.

Crash/Stolen Vehicle: Dispatch received a call advising of a single car crash on State Route 248 at Locust Grove Road. The caller advised that four male juveniles had left the scene on foot. The Ohio State Patrol was contacted to handle the crash, and deputies also responded to the scene to help locate the juveniles that had walked away. When Deputy Jones arrived on the scene he ran the crashed vehicles registration and it came back stolen out of Parkersburg, West Virginia. Deputy Jones located the four juvenile suspects about a mile up the road at a residence. They were taken into custody and transported to the Meigs County Sheriff’s Office. During the investigation conducted by deputies and State Troopers, it was determined that one of the suspects was a run-a-way from West Viriginia. Another suspect was determined to be the one who allegedly stole the car. He also, reportedly, had in his possession a set of car keys that he had stolen from the house they were found at when taken into custody. Those two juveniles were transported by Ohio State Highway Patrol to Chillicothe to be held in a juvenile facility until they have a court appearance on their charges. The other two suspects parents were contacted and came to the Sheriff’s Office and picked up their children. When Tara Biles, 30, of Parkersburg, West Virginia arrived to pick up her son, her ID was checked and it was discovered that she had a warrant outstanding for her arrest in Muskingum County, Ohio for failure to appear. She was taken into custody and incarcerated until Muskingum County Sheriff’s Office could send a deputy to pick her up. The drivers could have endangered lives driving the way that they did. If you have been the victim of injuries due to another’s reckless driving, you may want to take legal action against them by contacting someone like Virginia Car Accident Attorneys to represent you.

Deputies continue to do house checks as they are requested. 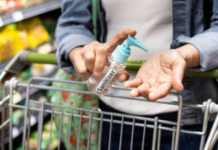 Chow line: Grocery shopping in the midst of COVID-19 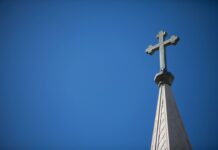 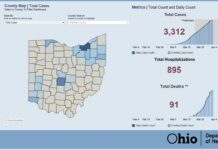 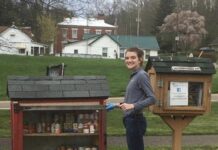 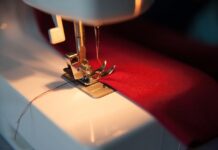 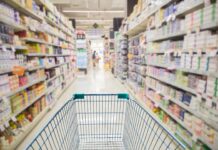 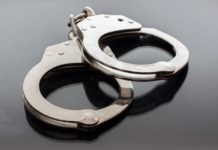 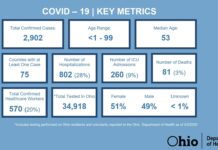 Law Enforcement to Charge Violators of Stay at Home Order

Chow line: Grocery shopping in the midst of COVID-19