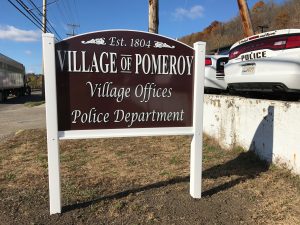 POMEROY – A regularly scheduled meeting of the Pomeroy Village Council was canceled for lack of quorum Tuesday night.

Also listed on the agenda was a Capital Improvement fee and whether or not to renew an IT services agreement.

Present for the meeting in addition to Mayor Shank were council members Nick Michael, Ruth Spaun and Vic Young along with Fiscal Officer Sue Baker. Also in attendance was Pomeroy Police Chief Mark Proffitt. Chief Proffitt had been out for some time with health related issues and Captain Jim Webster had been appointed to fill in as acting chief.

Absent for the meeting were council members Maureen Hennessy, Don Anderson and Phil Ohlinger. Hennessy and Anderson had said at the last council meeting that both were scheduled to be out of town for the January 17 meeting. With their absence and Ohlinger’s there was not enough council members to hold the meeting.

While not on the agenda, council had discussed at the previous meeting that they were going to address the parking meters in Pomeroy. Without action from council, the parking meters that have been free on Main Street and in the Pomeroy parking lot could revert to being paid.

Several residents and merchants were in attendance and most stayed after the meeting was canceled to discuss amongst themselves the issues with parking meters along with the increased water and sewer rates.

The next regularly scheduled meeting is set for February 6 at 7 p.m. in the village hall.

When asked about the Ordinances and the other issues that would have been discussed, Mayor Shank said three council members could call for a special meeting to address specific issues. It was unclear if that would happen.