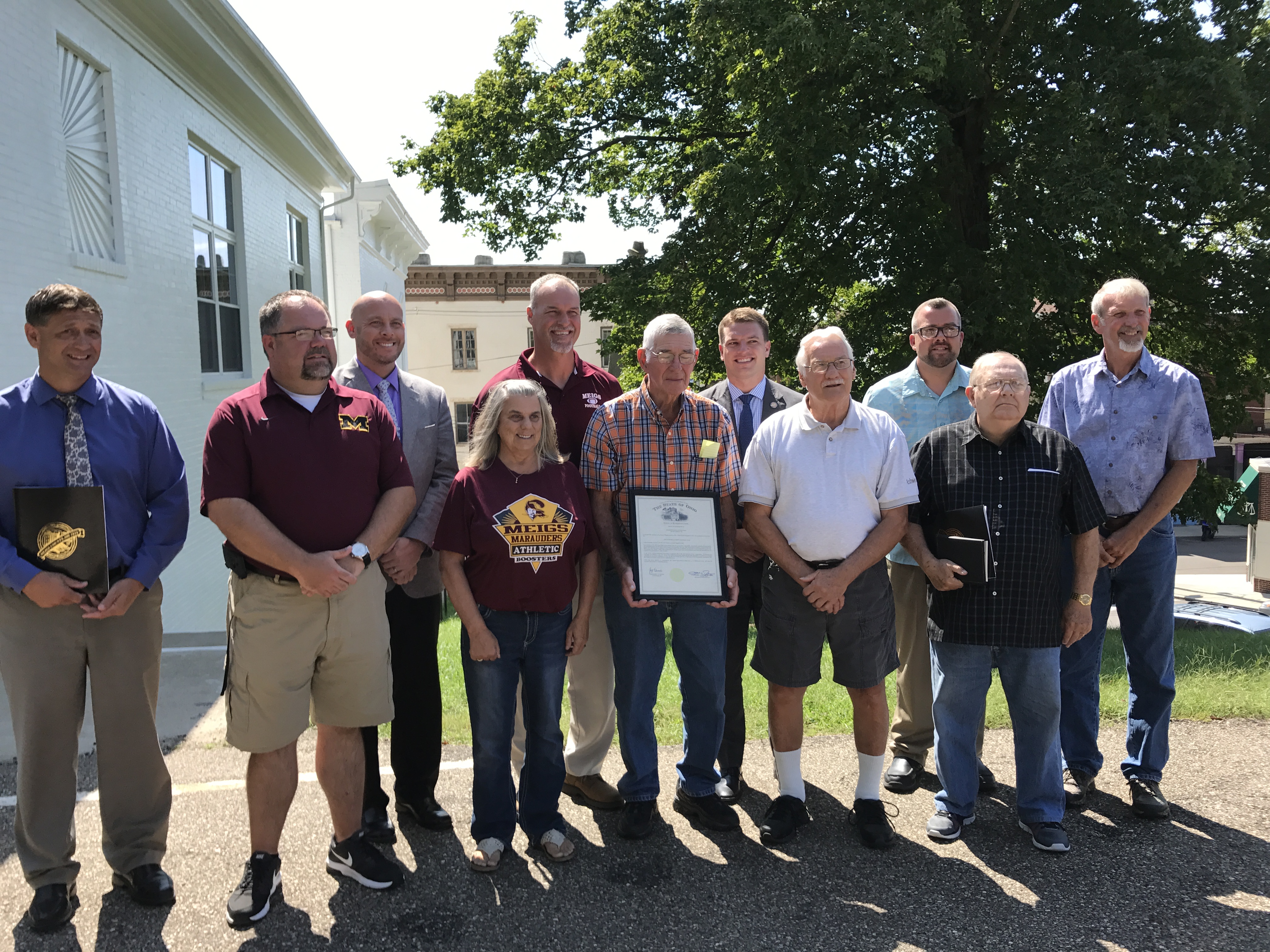 POMEROY, Ohio Proclamations were made in celebration of a milestone for Meigs Local School District, noting 50 years this fall.

In 1967 Meigs Local School District was formed when the Middleport Yellow Jackets, Pomeroy Panthers and Rutland Red Devils merged from their three separate districts into one. Football had been an important part of all three schools and when they merged together, a new team was formed. The anniversary of the school district and the football team under Coach Charles Chauncey were recognized by the County Commissioners at their regularly scheduled meeting Aug. 24, 2017.

The Meigs County Commissioners meeting was attended by several more individuals than usual, filling the room as proclamations were read and passed in recognition of the school’s milestone.

State Representative (R) Jay Edwards was present for the meeting and read a proclamation from him to the district regarding the anniversary of the football team. Edwards noted afterward that football had been so special to me as part of his education and congratulated the coaches and school officials present on the anniversary and thanked them for all that they do for the youth of Meigs County. Football has a special place in so many people’s hearts, no wonder this type of love is seen all over the world for it. People feel connected with football, they feel like family, they go to the games, buy the merchandise from places like the gold coast suns shop, as well as many others, they drink in the atmosphere because it means something to them and everyone else.

Meigs County Commissioner Randy Smith read a proclamation in recognition of the district’s anniversary which was unanimously approved. The proclamation noted the observance of the anniversary stating, and whereas the administration, teachers, coaches, staff, parents, and friends have been dedicated to providing an atmosphere and educational philosophy, which is carried over into the community to set high standards, to promote excellence in all aspects of the lives of all who have attended the school and all who have worked in Meigs Local.

The proclamation continues marking Aug. 25, 2017 as Meigs Local 50 Day in the county, With the latest renewal of a great friendly rivalry in the first football game of the 2017 season, as the Meigs Marauders host the Gallia Academy Blue Devils; that old friends from both schools gather and are re-united; that those who attend and those who play on the field may experience and enjoy the fellowship and shared memories of fifty years.

Another proclamation from the commissioners specifically recognized the history of the football team. According to the proclamation, in the summer of 1967 the newly formed Meigs Local was preparing for an inaugural football season in the Southeastern Ohio Athletic League. Charles Chauncey was picked to be the coach. He had coached the Pomeroy Panthers to a 26-12-2 record from 1960-1964. The first game was held Sept. 8, 1967 against the Wahama White Falcons. In that first game, the Meigs defeated Wahama 20-0. Meigs followed it up with another win against Fairfield 36-0 and before a �standing room only crowd� beat the Bulldogs 12-8. Meigs again came home with the win as they traveled to play Gallipolis 8-6. It was followed up with two more wins over Logan 14-8 and Wellston 14-6. The proclamation went on to state, �The young Marauder�s were 6-0 on the season and lost their only game an 8-0 contest to Ironton in a non-conference encounter. Meigs then traveled to Jackson and walked away with a 50-14 win to clinch a tie for the SEOL title. Another of the conference�s newly consolidated schools rolled into town in week nine. The Marauders had no problems with Nelsonville-York defeat the Buckeyes 28-0 to do what many though 10 weeks before was impossible, to clinch the 1967 SEOAL football crown. Meigs ended their season the next week defeating Parkersburg South 36-0 to finish the season at 9-1.�

On Friday night prior to the home game, that first football team will be recognized.

More information on the meeting will be forthcoming from the Meigs Independent Press.