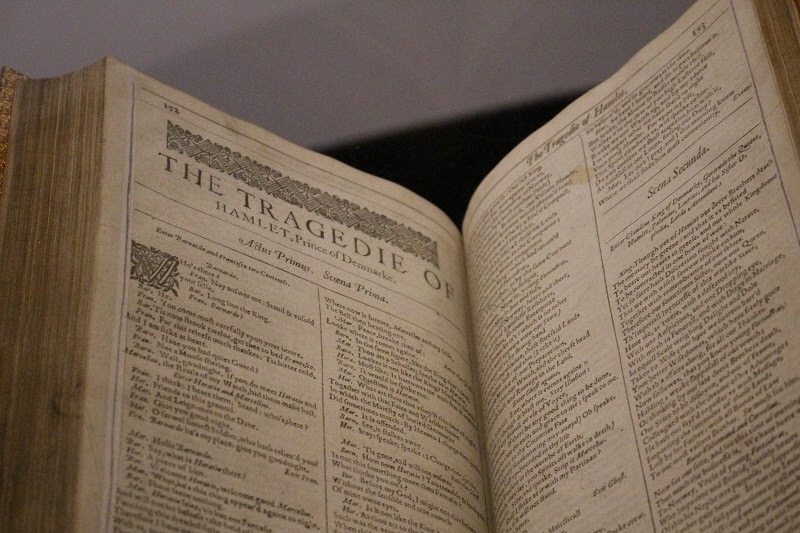 CINCINNATI, Ohio – Cincinnati Museum Center’s (CMC) newest exhibition takes guests on a whimsical journey through 400 years of William Shakespeare. Shakespeare and the Queen City features an original First Folio, the first printed collection of Shakespeare’s works. The First Folio, printed in 1623, is one of only 234 known surviving copies that preserved 36 of Shakespeare’s plays after his death in 1616. To enhance this literary and historic treasure, Shakespeare and the Queen City also examines the works of the literary icon and the way his plays, stories and characters have resonated, evolved and been adapted over time, including their influence on Cincinnati. The exhibition is free and open through October 29, 2017 at Cincinnati Museum Center.
First Folio

“It’s an honor for us to bring a rare First Folio, a true literary treasure, to Cincinnati,” says Elizabeth Pierce, president and CEO of Cincinnati Museum Center. “In some way, whether through a student production, Disney movie or at one of Cincinnati’s many theaters, everyone has come into contact with Shakespeare. We want to show how and why that has occurred and what makes his works so enduring.”

The centerpiece of the exhibition is a First Folio on loan from the Folger Shakespeare Library. First published in 1623, seven years after Shakespeare’s death, the First Folio is the first collected edition of his plays, compiled by fellow actors John Heminge and Henry Condell in hopes of preserving them for future generations. Among the 36 plays included in the First Folio are 18 that appeared in print for the first time, including Macbeth, Julius Caesar, Twelfth Night, The Tempest, Antony and Cleopatra , The Comedy of Errors and As You Like It. Written to be performed, many of his plays were never published during his lifetime and without their inclusion in the First Folio, these plays would be lost to modern audiences.

The First Folio comes to CMC after the Folger and CMC toured a total of 18 First Folios across all 50 states in 2016 to celebrate the 400th anniversary of Shakespeare’s death. CMC was selected by the Folger Shakespeare Library to provide tour management services, courier and display folios across the country and design and produce graphic panel displays and climate-controlled cases to house the invaluable folios during the tour.

Shakespeare and the Queen City also features collection pieces from CMC and local organizations including the Cincinnati Shakespeare Company, University of Cincinnati’s Archives & Rare Books Library and the Public Library of Cincinnati and Hamilton County to show how Shakespeare’s works hopped from the Elizabethan stage to American libraries, schools, homes and theaters. The exhibition explores how his works have been presented on stages and in non-traditional venues, how they have been adapted into film, television, illustrated works and in many written forms. Objects range from two encyclopedias in circulation during Shakespeare’s life to 19th century Cincinnati theater playbills to modern costumes and props.

In collaboration with Cincinnati Shakespeare Company, the exhibition also includes a stage area where guests can be more than just merely players. Guests can select their scenery, try real stage props, read from a script and try out stage directions from Shakespearean plays, all to the applause of an audience.

Cincinnati’s season of Shakespeare includes three other major productions as well. Cincinnati Playhouse in the Park is preparing for their performance of Shakespeare in Love in September and the Cincinnati Ballet will be performing Romeo & Juliet in October. Ensemble Theatre Cincinnati’s Red Velvet in March 2018 presents the revolutionary tale of one actor’s portrayal of Othello.

Shakespeare and the Queen City is open through October 29, 2017 at Cincinnati Museum Center. For more information visit www.cincymuseum.org/shakespeare.