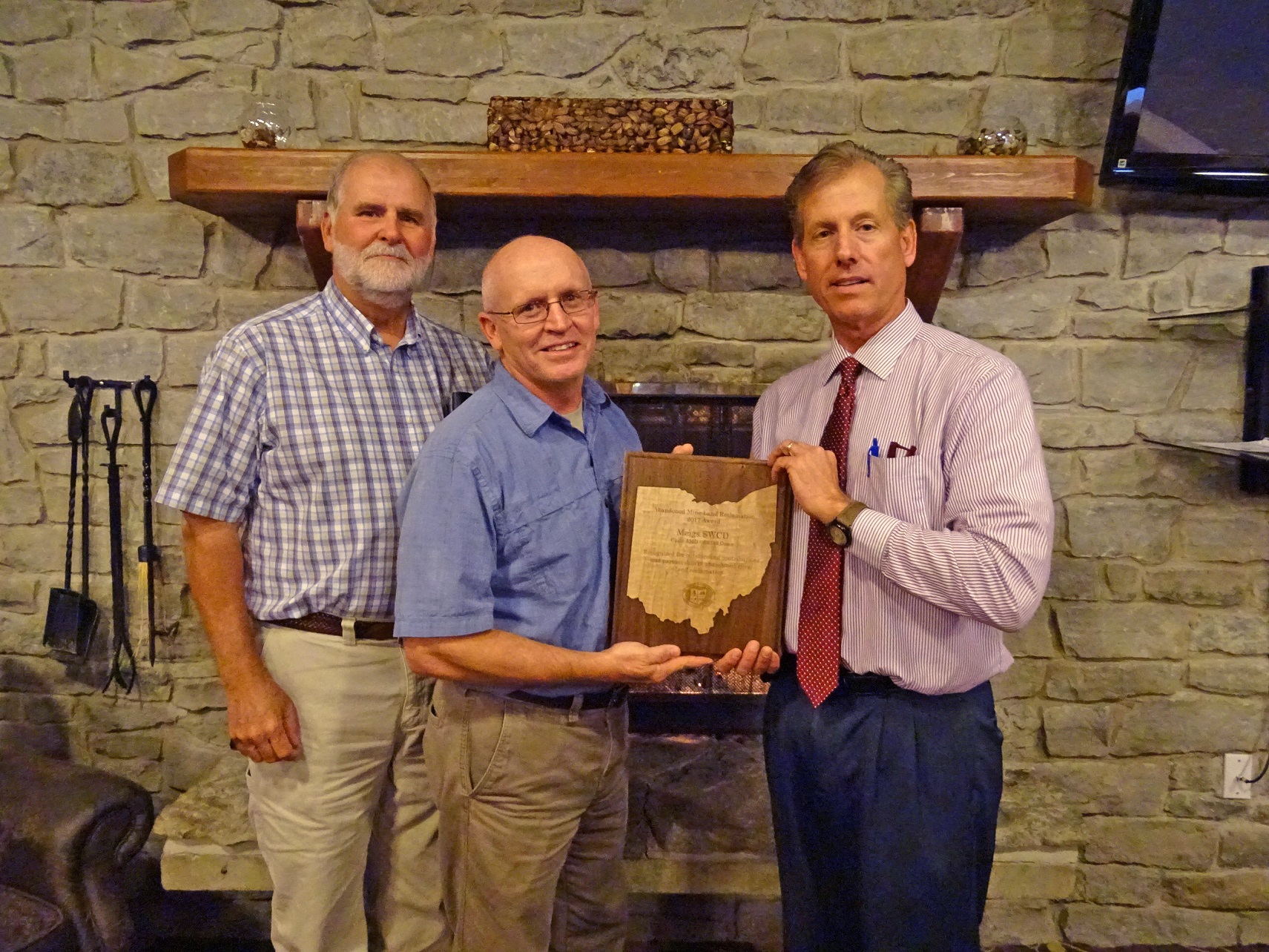 STAFF REPORT
POMEROY, Ohio – The Meigs Soil and Water Conservation District was recently awarded for its role in helping bring a dead stream back to life.

The Meigs SCWD received the Abandoned Mine Land Reclamation Award for 2017 from the Ohio Department of Natural Resources-Division of Mineral Resources Management at the fall meeting of the Ohio Mineland Partnership, which was held at Burr Oak State Park Lodge and Conference Center in Glouster on Oct. 17.

Presenting the award to the Meigs SWCD was Lanny E. Erdos, chief of the ODNR-DMRM. The Meigs SWCD shared the award with the contractor, Dirt Works Express of Logan, Ohio, represented by Allan Johnson, Logan, and Lime Doser Consulting LLC of Clarksburg, W.Va., represented by owner Don Stamm and family. The awardees were recognized for outstanding contributions and partnership in abandoned mine land reclamation.

The award was for the State Route 143 Doser which is located near Pomeroy at the junction of state routes 7 and 143. A doser is a large, silo-like structure that delivers calibrated doses of finely crushed limestone into a stream to help neutralize acidity in the water. In this case, the doser is used to treat Thomas Fork.

Thomas Fork, a tributary of Leading Creek, is located mostly in Salisbury Township and drains roughly 32 square miles from the Bradbury and Hysell Run communities behind Middleport, along state Route 143 behind Pomeroy up to Horner Hill, Ball Run, and the Laurel Cliff and Rock Springs communities.

According to Erdos, Thomas Fork has experienced substantial impacts from historic abandoned coal mining of the Pomeroy (No. 8a) coal seam. Acid Mine Drainage (AMD) problems within the watershed (result) from a combination of acidic discharges from contour surface mining, auger mining and underground mines.

“Working in concert with the previously constructed Thomas Fork Doser (located on Bailey Run Road), the purpose of the (SR 143 Doser Project) is to achieve significant low-flow acid reductions at Thomas Fork river mile 4.3, approximately one mile downstream of the project location. DMRM, working with Meigs SWCD, developed the project and secured funding through the USFWS Leading Creek fund,” he explained.

In presenting the award, Erdos stated the SR143 Doser project involved the installation of the division’s first and only electrically driven lime doser. Due to a lack of elevation present to utilize a traditional water-driven doser, the SR143 Doser uses a series of electrically driven motors, augers and fins to dispense alkaline material. Additionally, unlike the division’s other dosers, the SR143 Doser utilizes superfine lime dust (calcium carbonate) to add alkalinity to the stream. This material was chosen in hopes that it becomes part of the stream’s bed load and utilized for treatment during low flow events.

In order to safely construct the doser foundation and gravel access road, and to prevent future erosion from occurring, 110 linear feet of Thomas Fork’s stream bank was stabilized with a combination of compacted fill, rip rap and vegetated Flex-a-mat erosion protection. 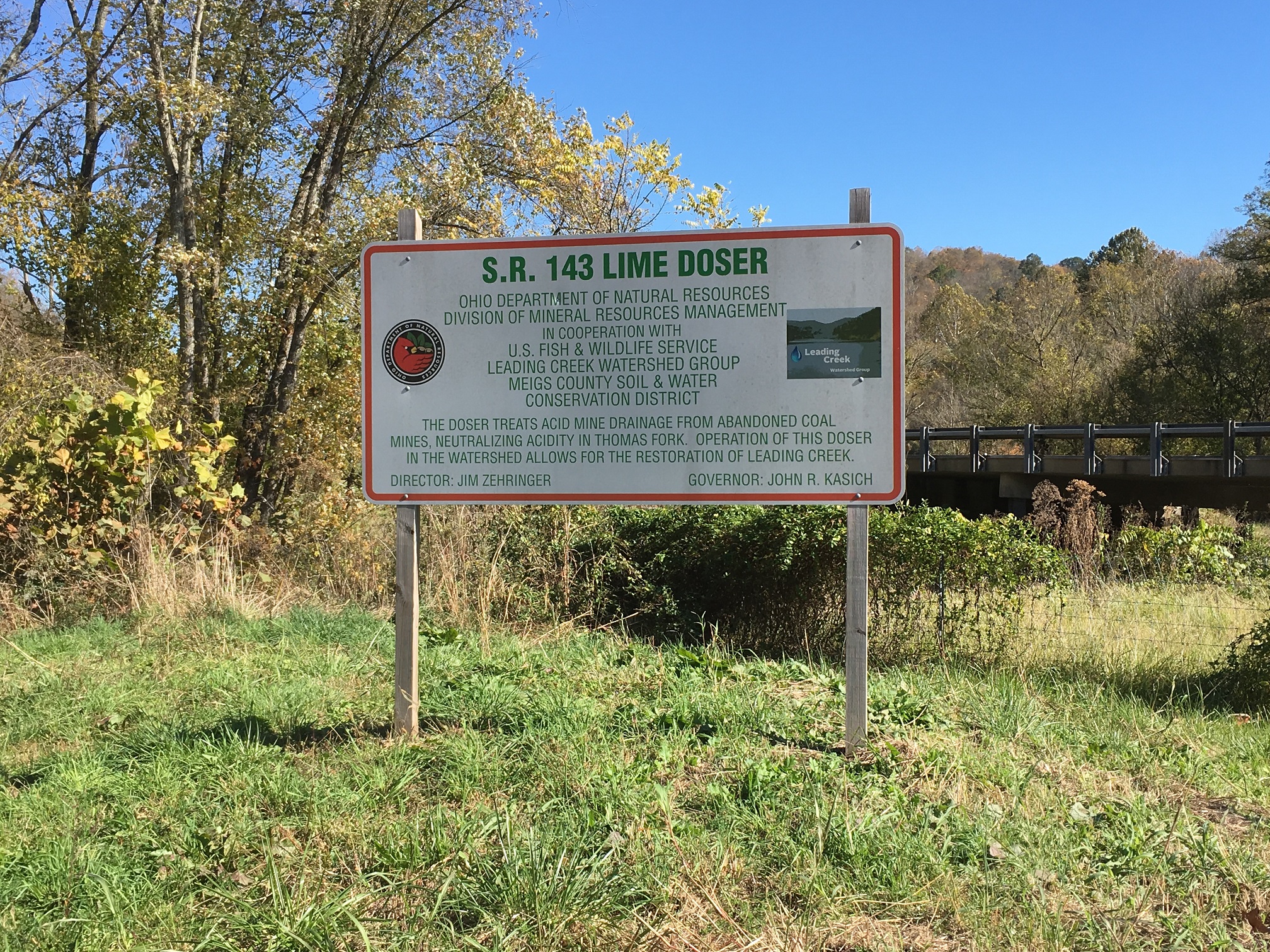 “This contract was completed successfully and under budget,” Erdos said, “due to the effective research, problem solving and cooperation demonstrated by both the doser supplier and contractor during the course of project construction.”
The SR 143 Doser complements the existing Thomas Fork Doser on Bailey Run Road, which went into operation in 2012. In 2011, the sample site downstream of the SR 143 Doser (river mile 4.3) had zero fish species present while in 2016, after it was in was in place, 11 species and 207 total fish were collected during sampling events. The Meigs SWCD currently operates, maintains, and monitors both of the dosers.

Recovery targets have not been met in the stream reach targeted for biological improvement/recovery. However, data results as of 2016 show significant improvements in fish population.