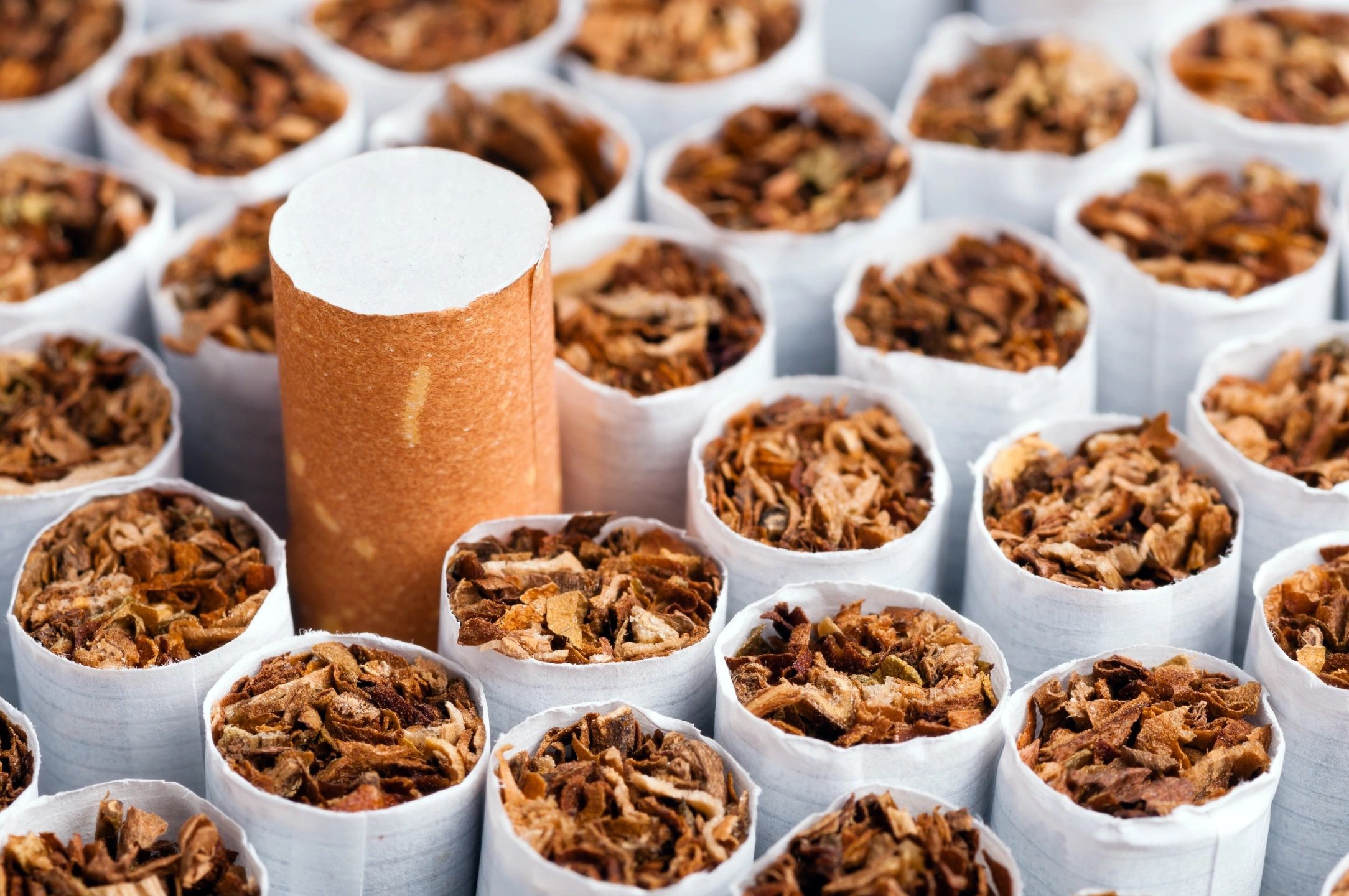 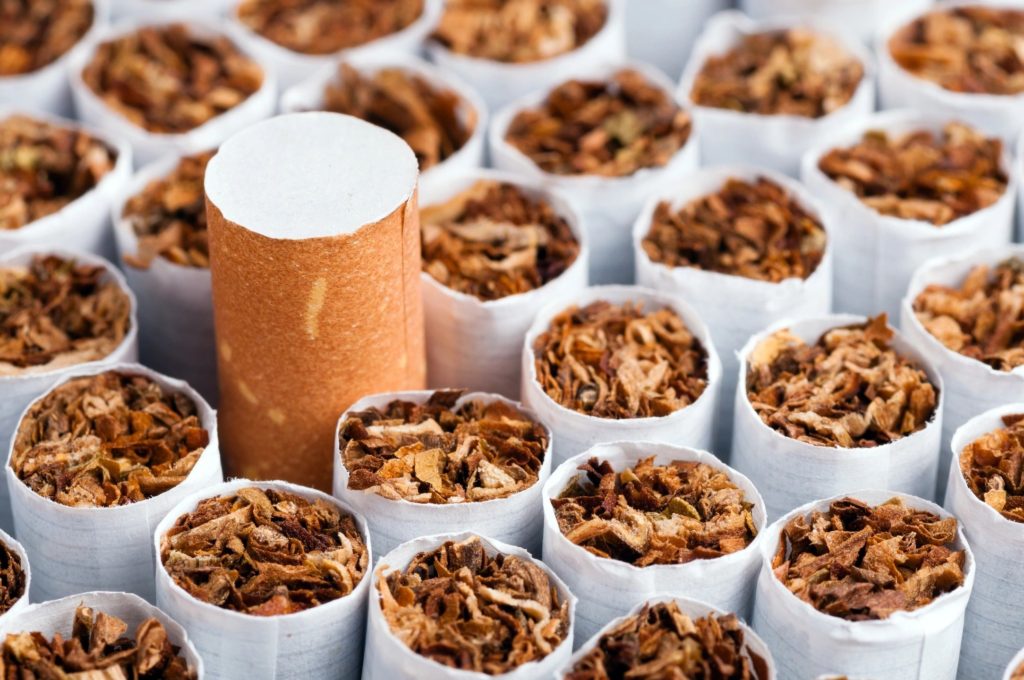 NATIONAL – Overall, cigarette smoking among U.S. adults (aged ?18 years) declined from 20.9 percent in 2005 to 15.5 percent in 2016. Yet, nearly 38 million American adults smoked cigarettes (“every day” or “some days”) in 2016, according to data released today by the Centers for Disease Control and Prevention (CDC).

The new data, from the National Health Interview Survey (NHIS), show that among adults who have ever used cigarettes, the percentage who have quit increased from 50.8 percent in 2005 to 59.0 percent in 2016. During 2005–2016, the largest increase in quitting was among adults ages 25–44 years. If you’re thinking of quitting, have you considered vaping to help make the transition easier? Take a look at SlickVapes for some ideas. Cannabis users are not immune from being able to switch to vapes either. In fact, companies such as old 27 north could now offer vapes and other products that are specially equipped for cannabis consumption. Any cannabis user who is considering making the switch might want to check out the best 510 thread battery.

“The good news is that these data are consistent with the declines in adult cigarette smoking that we’ve seen for several decades,” said Corinne Graffunder, Dr.P.H, director of the CDC’s Office on Smoking and Health. “These findings also show that more people are quitting, and those who continue to smoke are smoking less.”

Since 1965, the NHIS has tracked cigarette smoking, the most common form of tobacco product use among U.S. adults. The U.S. Surgeon General has concluded that the burden of death and disease from tobacco use in the United States is overwhelmingly caused by cigarettes and other combusted tobacco products. 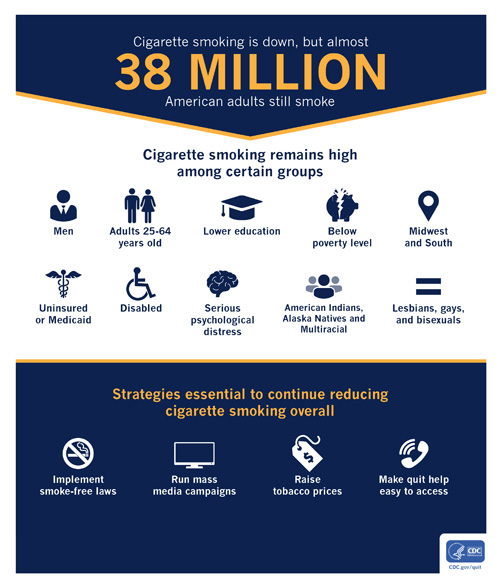 Despite this progress, disparities in smoking persist across population groups. Cigarette smoking was especially high among males, those aged 25-64 years, people who had less education, American Indians/Alaska Natives, Americans of multiple races, those who had serious psychological distress, those who were uninsured or insured through Medicaid, those living below the poverty level, those who had a disability, those who were lesbian, gay, or bisexual, and those who lived in the Midwest or South.

“The bad news is that cigarette smoking is not declining at the same rate among all population groups,” said Brian King Ph.D., deputy director for research translation in CDC’s Office on Smoking and Health. “Addressing these disparities with evidence-based interventions is critical to continue the progress we’ve made in reducing the overall smoking rate.”

Reducing smoking-related disease: What more can be done?

Proven population-based interventions – including tobacco price increases, comprehensive smoke-free laws, anti-tobacco mass media campaigns, and barrier-free access to tobacco cessation counseling and medications – are critical to reduce cigarette smoking and smoking-related disease and death among U.S. adults, particularly among populations with the highest rates of use.

Cigarette smoking among U.S. adults has been reduced by more than half since 1964, yet remains the leading preventable cause of disease and death in the United States. It kills more than 480,000 Americans each year. For every person who dies this year from smoking, there are over 30 Americans who continue to live with a smoking-related disease. With regards to vaping, it is helping to reduce the number of people smoking, and in turn should help reduce the number of people dying from the habit. As already mentioned, there are plenty of companies that offer vaping products, with https://www.pure-eliquids.com/pod-kits/ offering different kits that can help you come away from smoking. If you are a heavy smoker, and need more advice or information on how you can be helped to quit, call 1-800-QUIT-NOW or go to www.smokefree.gov.