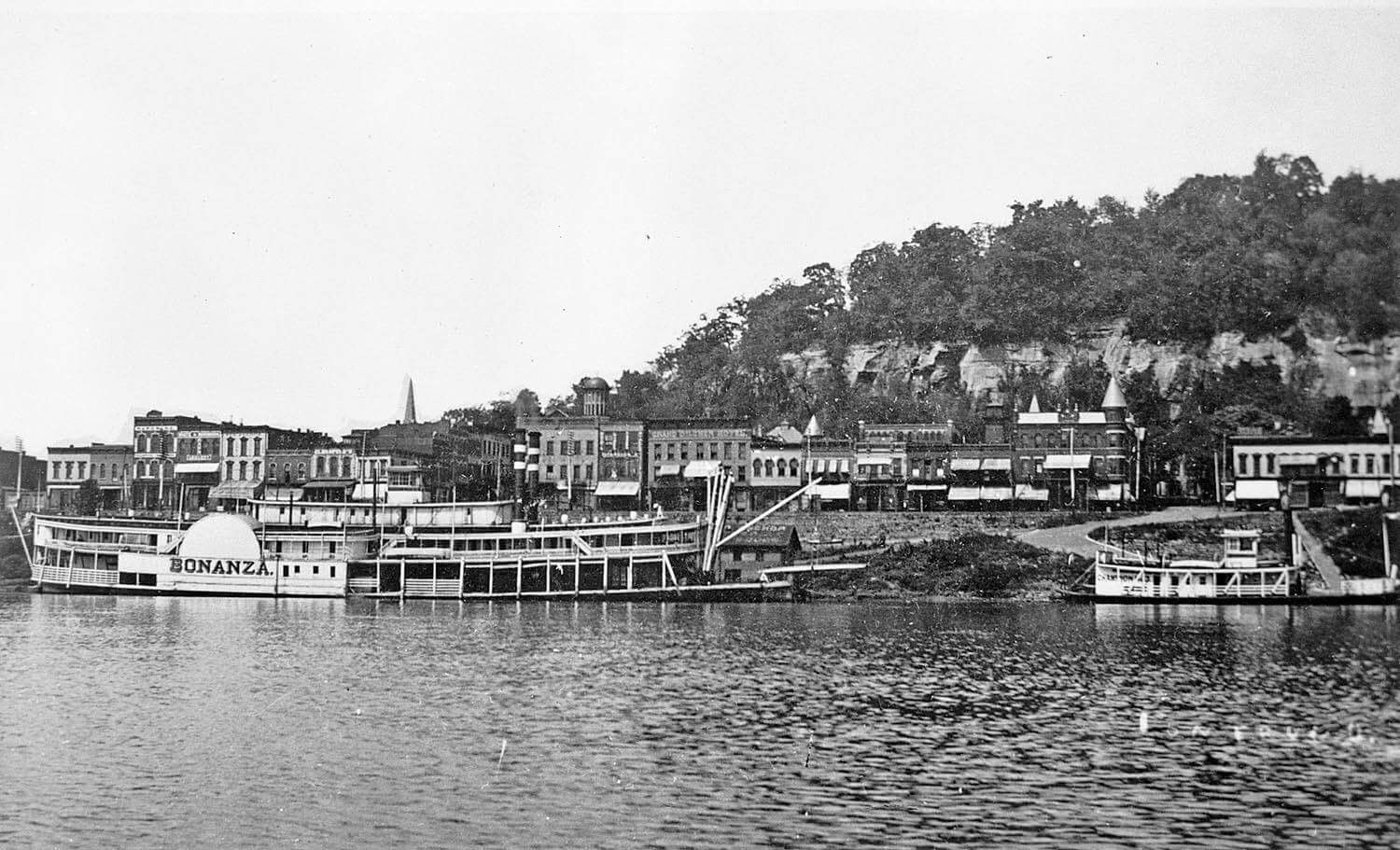 On Thursday, July 17, 2018 my wife and I, along with our friend Gary Coleman, ventured to Huntington, West Virginia, and spent the afternoon aboard the steamboat American Queen. Built in 1995, this 418 foot long, 6 deck riverboat is the largest steamboat ever built. It is a rare occurrence to see the American Queen or any steamboat pass by Meigs County nowadays. The Delta Queen is currently in Houma, Louisiana, being renovated and waiting on exemption from SOLAS or Safety Of Life at Sea Act, and unfortunately, the Mississippi Queen was scrapped and is no more.

There was a time, however, that steamboats passed Meigs County on an almost daily basis. This was during what is called “The Golden Age of Steamboats.” This period in history ranges from 1850-1870. However, traveling the river in the 19th century was much different than it is today. The Ohio was more wild and unpredictable due to the lack of dams. Modern dams help keep the Ohio at a steady pool for boats to easily navigate. In the 19th century, boatmen had a rhyme about a portion of the river along Meigs County that was known to be rough.
​Letart Falls and Graham Station [now Racine,]
​Meanest places in creation.
​Little Antiquity in between –
​The worst places ever seen.

Letart Falls does not have falls anywhere on the river today but it did before dams. In S.L. Carter’s Pioneer History of Meigs County, he gives a description of the swiftness of the river at Letart Falls. “[The Letart Falls rapids] caused the water to boil and make a grumbling, dull noise, and…the eddy of great power, which sucked in logs and everything with its attraction.” Traveling through here was no easy task.
The following is a passage from the journals of the Lewis and Clark expedition west from September 18, 1803.

“The morning was clear and having had every thing in readiness the over night we set out before sunrise and at nine in the morning passed Letart’s falls; this being nine miles distant from our encampment of the last evening— this rappid is the most considerable in the whole course of the Ohio, except the rappids as they are called opposite to Louisville in Kentuckey— the descent at Letart’s falls is a little more than 4 four feet in two hundred fifty yards.”

The Ohio River is also to thank for the name of the village of Middleport. Phillip Jones, who noticed that crews on flatboats coming downriver from Pittsburgh and keelboat crews coming upriver from Cincinnati would often meet near the town he was laying out above the mouth of Leading Creek, and there, they would switch vessels to take back to their respective cities. Because of this middle location, or port, where the boats would meet, he decided to name the new village Middleport in 1841because of its location on the Ohio River between Cincinnati and Pittsburgh.

Pioneer travel on the Ohio [R]iver, for neighborly intercourse, or traffic, seems to have been done in canoes, while flatboats were in use for the transportation of families, produce and goods down the stream; but when it was necessary to carry on trade up and down the river, keel-boats were employed, until steamboat navigation superseded their mode as merchant carriers. The first steamboat that ever passed down the Ohio [R]iver is said to have been the New Orleans, built at Pittsburg by Mr. Roosevelt, and which left that port in October, 1811and reached Natchez, Miss., in January, 1812. Earthquakes occurred during the trip down. Few charts of the river were in existence, and the falls at Letart were provided with a pilot appointed by Congress, or rather authorizing the courts of Gallia County to appoint a pilot for Letart [F]alls to pilot boats over the falls in the Ohio river, such pilot to give bonds for the proper discharge of his duty. Thomas Sayre was appointed in 1804 as such pilot. (The Pioneer History of Meigs County)

Four years later, in 1816, steamboat George Washington was the first steamboat built that had the capability to go upriver as well as downriver. The first recorded steamboat built in Meigs County was built by Rodney Downington in 1835. It was constructed on Leading Creek, named General Harrison, and built to carry freight on a trade route between Cincinnati and New Orleans.

Valentine B. Horton ordered construction of the first coal fired steamboat Condor built in Cincinnati in 1836. He then went on to build Meigs County’s first shipyard at the mouth of Nailor’s Run in 1845. From there, the first boat built was Condor No. 2, completed in 1846.

Over the years, steamboat era was surpassed with the age of steam locomotives and railroads. Additionally, river travel remained prominent in Meigs County through the early 20th century. However, when boats like American Queen pass Meigs County every so often, that river history, in some form lives on.

As the old Ohio flows…