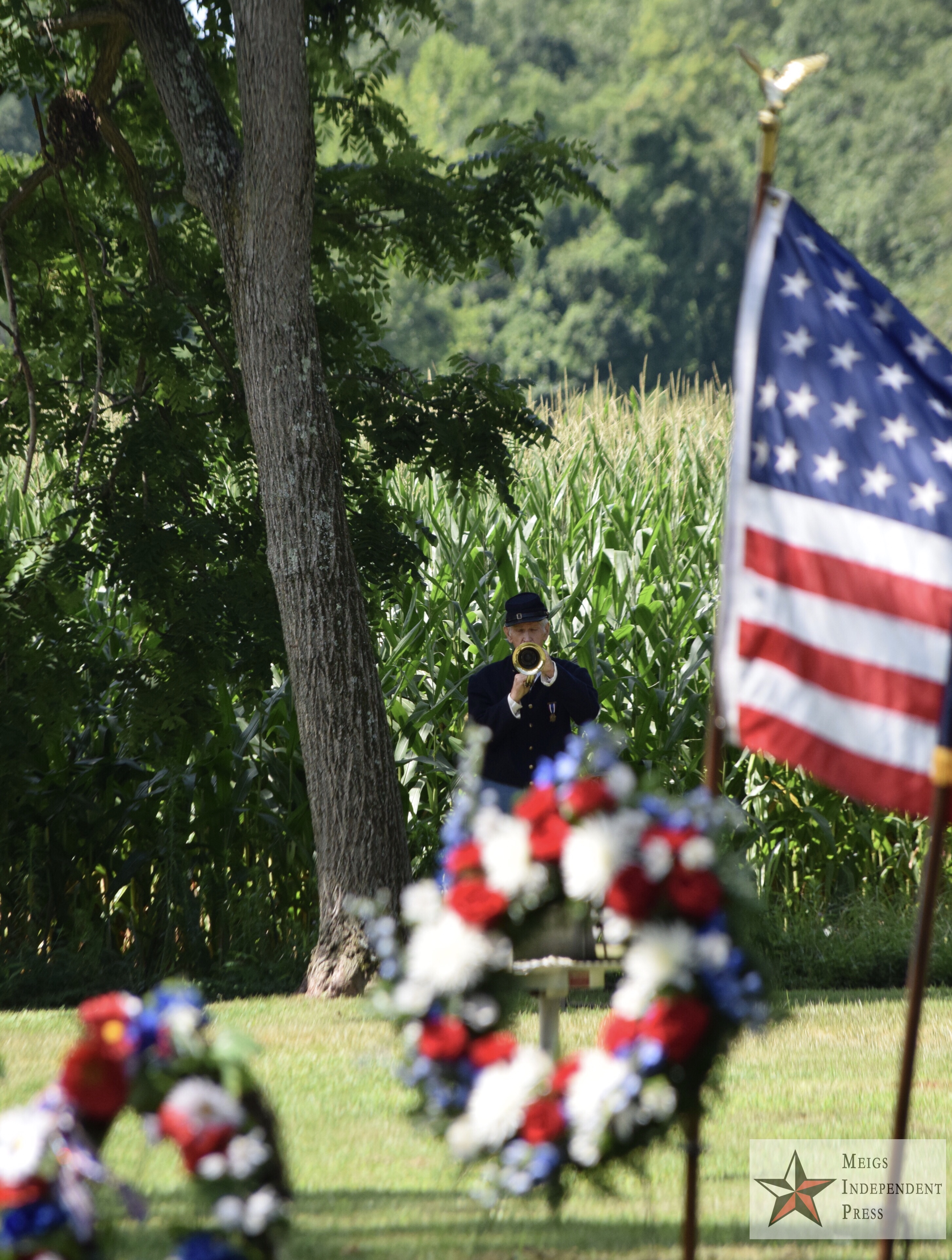 PORTLAND, Ohio – The summer of 1863 brought headlines of the Civil War including the Great Raid of General John Hunt Morgan and his men eventually ending in Meigs County, Ohio. It was along the Ohio River through Portland, Ohio that Union forces caught up to Morgan and his raiders. The result of that encounter became known as the Battle of Buffington Island.

A memorial service was held to remember the 155th anniversary of the Battle of Buffington Island on July 21, 2018.

The service was organized by the Sons of Union Veterans. Jim Oiler, Commander of SUV Cadot-Blessing Camp #126, helps organize the event each year. This year marked 155 years since Gen. John Hunt Morgan and his raiders tangled along the Ohio River with Union forces including Brig. General Henry M. Judah and Brig. General Edward H. Hobson in what would be Ohio’s only Civil War battle. Oiler said the raid had significance because of what was happening at the time with the war. Just weeks before the major battles of Gettysburg and Vicksburg had taken place that summer of 1863. Morgan’s purpose was to pull the Union forces from other Confederate forces. “It took a lot of resources to pursue Morgan,” Oiler said.

The battle encompassed all three branches of the Union military at the time, the Navy, Army and Marines.

“We had thousands of soldiers from Ohio but today we are honoring those that fought in Ohio,” Kerry Landon, Commander of the Ohio Department Sons of Union Veterans said during his remarks in the service.

In addition to Landon speaking, Sam Wilson presented a brief history of the battle. A brief history from the program states, “The Battle of Buffington Island on July 19, 1863, was the major engagement during General John Hunt Morgan’s Great Raid into Kentucky, Indiana, and Ohio and was the only significant Civil War battle to be fought in Ohio. It was a decisive two-hour encounter involving approximately 1,800 of John Hunt Morgan’s Confederate cavalrymen and 3,000 Union artillery, cavalry, and infantry supported by navy gunboats on the Ohio River. Morgan’s troopers were poised to cross the Buffington Island ford when a convergence of Union gunboats and troops thwarted the crossing, captured nearly a third of Morgan’s command, and scattered his forces to the north. Morgan was finally captured in Columbiana County on July 26. The battle is noteworthy because it included two future presidents of the United States, all with Ohio connections: Rutherford B. Hayes and William McKinley.”

During the service, musician Steve Free played several songs about or from the Civil War with one the selections being the “Battle Hymn of the Republic”.

Dale Lamphier and John Holcomb, both of Cadot-Blessing Camp #126, played taps at the end of the service.

Following the service, a lunch was served at the Portland Community Center and William Donegan presented the program “The General in General” in which he portrays General William Stark Rosecrans.