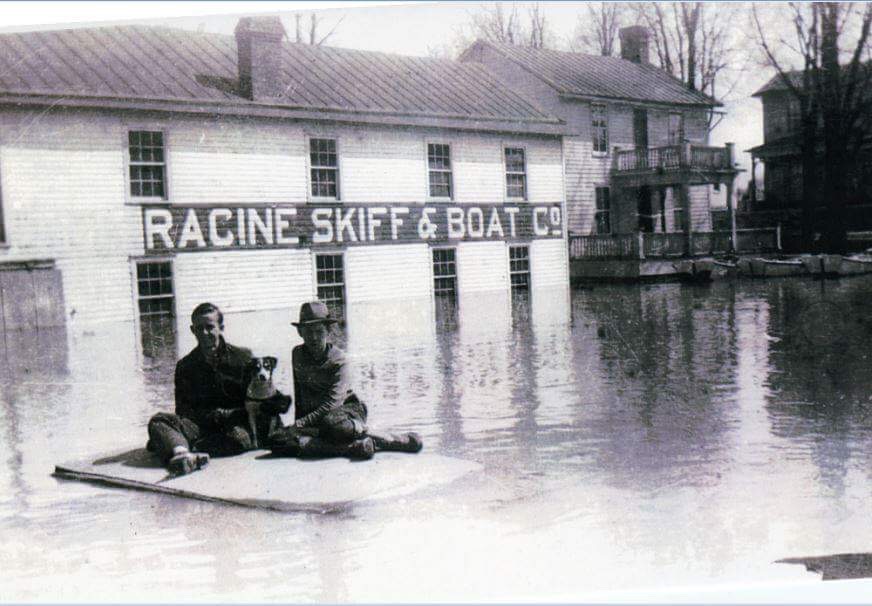 The earliest record of boatbuilding in Racine dates back to 1822. Larkin’s Pioneer History of Meigs County states, “Mr. Lucius Cross came from Marietta in 1822 to lands of his own, and started a tannery, built flat boats to send hay to the South, opened a store of general merchandise, erected a mill on Bowman’s run for making flour, and sawing lumber, giving employment to hundreds of men in these different enterprises.” However, the most well-known boat manufacturing company, not only in Meigs County, but all over America’s inland waterways, was the Weaver Skiff company of Racine.

Lucius Weaver, whose lineage comes originally from the “Nease Settlement” area of Meigs County, served as a drummer in the Civil War. After that, Lucius went to Vermont and Massachusetts to learn the monument business. Eventually becoming a granite and marble cutter, he returned to Meigs County and opened Weaver Granite Works in Racine. Lucius married the daughter of Capt. George Smith and had a child, James Wallace Weaver, who was called Wallace. Wallace’s mother died when he was two years old, and he was then raised by his grandparents Capt. George Smith and his wife.

In 1869, Captain George Smith started a skiff and boat building business in Racine. He passed this skill onto his son J.Q and his grandson Wallace Weaver. While Wallace took instantly to the craftsmanship of boat building, Wallace’s father Lucius persuaded him to learn the flour milling business. Wallace went on to become part owner of the Star Mill Co. in Racine (Star Mill Park’s namesake). Wallace married Lillian Weldon, and together they had one son, James Wallace “Boone” Weaver, Jr., born in 1897. In 1900 Wallace went on start his own business, leaving milling behind for his original trade: Weaver Skiff Works was born.

His son James Wallace Weaver, Jr., earned the nickname “Boone” because of his love for hunting, trapping, and fishing, similar to the infamous Daniel Boone. Boone Weaver grew up in his father’s footsteps building skiff boats. The term skiff or skiff boats refers to a typically small flat-bottomed open boat with a pointed bow and a flat stern that was originally developed as an inexpensive and easy-to-build boat for use by inshore fishermen. Weaver’s skiffs and johnboats were mostly 14, 16, 18, and 20 feet in length and were used mainly as life boats on steamboats and ferry boats all across the inland waterways.

The most common wood used in the making of these boats were Philippine mahogany, red cedar and Spanish cedar, poplar, and redwood, the latter being Boone’s favorite to work with. The Weavers used white oak lumber for the ribbing in these vessels at first but eventually switched to 5/8” plywood due to availability and price. The boats were originally made with various hand tools, but as technology advanced, power tools became the more popular choice to use.

In 1950, Boone decided to build his wife Nora a beauty shop next to their home. He also moved the Weaver Skiff Works business next door at the corner of 5th and Vine Streets in Racine. Boone would continue to build skiffs at this location and serve as bank director until his death in 1978. During his tenure as bank director, he oversaw the consolidation of Racine Home Bank and First National Bank of Racine to become Home National Bank of Racine. I am told that the table in the board of directors’ conference room at the new Home National Bank is made from a former Weaver skiff. Boone was also actively involved in The Sons and Daughters of Pioneer Rivermen (S&D) organization which established the Ohio River Museum in Marietta in 1941, oversaw the acquisition of the now 100 year old towboat-steamboat W.P. SNYDER JR. to the museum in Marietta in 1955, as well as the 1972 construction of the current museum.

A year after Boone’s death, Weaver Skiff Works was sold to Gordon Winebrinner who continued the business for many years. Ironically, when Gordon Winebrinner was less than two weeks old, he was transported to safety in a Weaver skiff during the great flood of 1937. Coming full circle, Gordon went on to build the same pattern boat that saved his life those many years ago. It was noted in Meigs County History: Volume II that Gordon had much respect for Boone, and he considered it an honor to carry on his traditions.

I reached out to Capt. Don Sanders, a friend of mine and former captain of The Delta Queen Steamboat Company and Rising Star Casino, who owns a Weaver Skiff. He shared the following:
When the river is running swiftly, and the water is about halfway up the icebreakers [at Cincinnati ], the current builds up in front of them and tumbles through the cement giants in a terrifying display of whitewater rapids. That is when I loved to come racing down upon them in my sixteen-foot, wooden Weaver Skiff, the FLYING FISH, and reaching the precipice before the falls, the oars of the heavy craft were twisted in opposite directions so that the five-hundred-pound yawl spun as it plunged between the massive piers. As thrilling as the ride was for me, and as frightening as it was to a particular passenger, complete control was maintained with the oars throughout the short, but exhilarating adventure.

Capt. Sanders writes a weekly column for the Northern Kentucky Tribune sharing the stories of his long association with the river — from discovery to a way of love and life. His September 2nd article titled The River: Great Skiff Race; An Adventure to Become Rowing Champion of the Great Kanawha River tells a story of an incident in a Weaver skiff. You can read it here: https://www.nkytribune.com/2018/09/the-river-great-skiff-race-an-adventure-to-become-rowing-champion-of-the-great-kanawha-river/