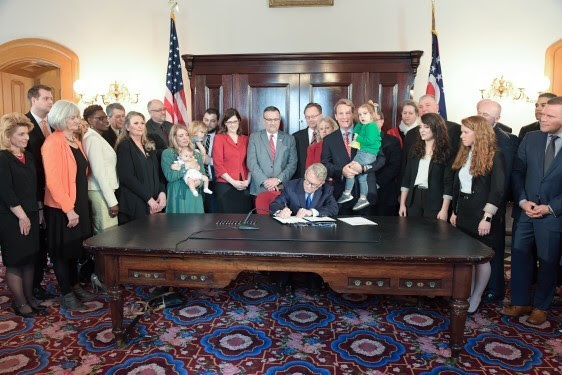 On Tuesday, Ohio Governor Mike DeWine was a featured speaker during the Ohio Library Council’s Legislative Day. During his speech, he talked about how important libraries are to communities across Ohio and thanked librarians for truly making a difference in kids’ lives. Governor DeWine has proposed in his budget providing an additional $8.5 million to libraries over the biennium by maintaining the current rate for the Public Library fund.

Also on Tuesday, Lt. Governor Jon Husted visited Zanesville for the signing day of more than 400 students at the Mid-East Career center. The signing day memorialized the student’s commitment to attend the career center during the next school year.  He also delivered remarks highlighting the role of career technical training in Ohio’s workforce.

On Thursday, Governor DeWine signed Senate Bill 23, the Human Rights and Heartbeat Protection Act. DeWine was joined by legislative leaders and sponsors, as well as supporters of the legislation at the Ohio Statehouse ceremony. DeWine emphasized his belief that essential function of government is to protect those that cannot protect themselves, incluing the unborn, the elderly, and those with disabilities.

On Friday, Governor DeWine participated in a groundbreaking ceremony for Hopewell Elementary School in Dublin.