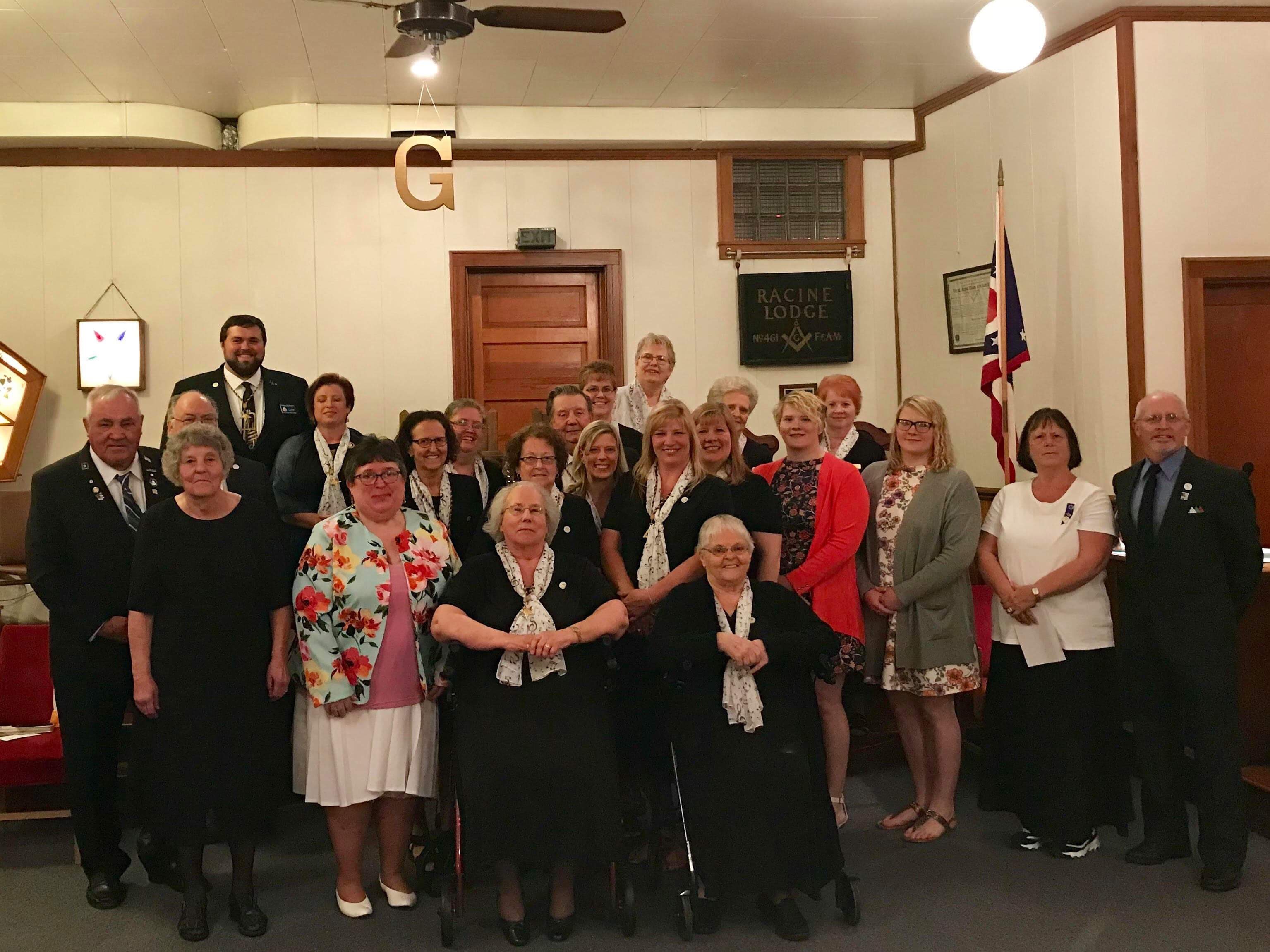 RACINE, Ohio – On Monday, May 6, 2019 Racine Chapter #134 Order of The Eastern Star held its annual inspection and welcomed four new members: Jim and June Hayman, Emily Bunce, and Sarah Bunce. The inspection was held inside the Racine Masonic Temple. The annual inspection provides a special opportunity for the members of Racine Chapter to renew friendships with Eastern Star members from around District 25 which includes Meigs, Athens, Washington, and Morgan Counties.

Worthy Matron and Patron Ruth Ann and David Fox welcomed morethan sixty guests and officers to the regular stated meeting. The Inspecting Officer was Jan Emge, Deputy Grand Matron of Southeast Ohio, Team 25. Special honor was given to the gathering by the attendance of Associate Grand Patron Charles Merkle. In addition, Grand Representatives of Nebraska and Montana were in attendance, as well as various officers of District 25, past grand representatives of various states and Canadian Provinces, past and present Worthy Matrons and Worthy Patrons, and past Deputy Grand Matrons. A reception with refreshments followed the meeting. The main dining room and Chapter rooms were decorated in a musical theme with trumpets prominently displayed.

The Order of the Eastern Star is the largest fraternal organization in the world to which both men and women may belong with more than 650,000 members worldwide.  In Eastern Star Chapters, Masons and their female relatives promote the values of charitable purposes that are such an important part of the Masonic fraternity.  Male petitioners must be members in good standing of a regular Masonic lodge.  A woman always serves as the presiding officer of an OES chapter, but Masons are there to advise and support.  Females must be 18 years of age or older, and related to Masons in good standing or a member either active for three years or majority of the International Order of Job’s Daughters, or of the International Order of the Rainbow Girls. While the Order of the Eastern Star has evolved over the centuries, it still remains rooted in its charitable endeavors and fraternal fellowship.

An Eastern Star Chapter has members of all ages.  Some are young men and women who are in college or just beginning their careers.  Some are “Baby Boomers” or “Gen-Xers,” and still others have been members of the Order of the Eastern Star for 50 years or more.  It is an amazing mix that results in shared wisdom and ideas as members grow to appreciate and learn from the knowledge and talents of their sisters and brothers, both young and old. OES chapters server their communities in a variety of ways.  They collect food for needy families, donate school supplies to disadvantaged students, offer scholarships, support Little League teams and hospitals, participate in walkathons to fund research to cure cancer and other deadly diseases, and sponsor Masonic youth organizations (Order of Job’s Daughters, the Order of the Rainbow for Girls, and Order of DeMolay).  Chapters also work together to support several statewide charities, including the Ohio Eastern Star Home and a long-standing OES scholarship program for future pastors and other religious leaders.

For more information or inquires on joining The Order of The Eastern Star, please visit www.ohiooes.org or call (740) 247-4505.