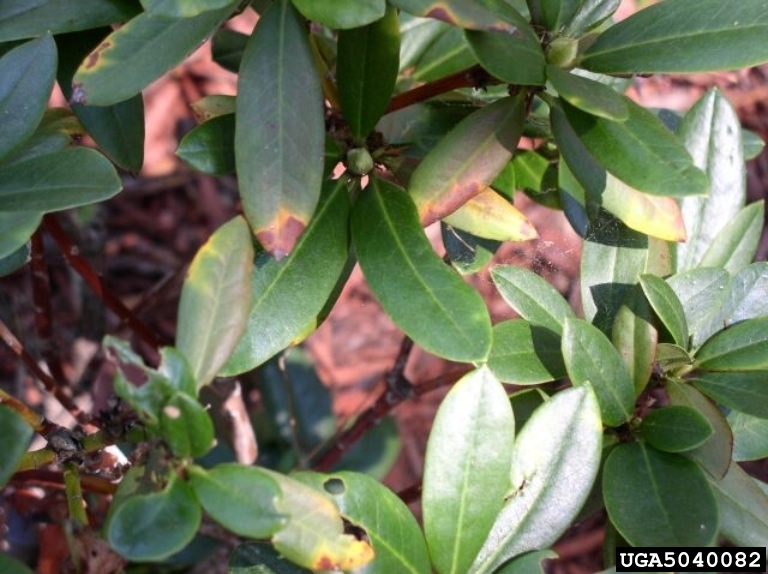 Ohio State University Extension, the Ohio Department of Natural Resources Division of Forestry, U.S. Forest Service, and local Soil and Water Conservation Districts are working with the ODA and USDA APHIS to provide support to customers who purchased rhododendron plants from Wal-Mart or Rural King stores with the potential to spread sudden oak death to native woodlands in the region. Phytophthora ramorum, the pathogen that causes sudden oak death, has resulted in widespread mortality of oaks and other species in coastal areas of California and Oregon.

On July 16, the Ohio Department of Agriculture (ODA), in coordination with the USDA Animal and Plant Health Inspection Service (USDA-APHIS) issued a press release indicating that sudden oak death caused by Phytophthora ramorum was detected on rhododendron and lilac plants shipped to Wal-Mart and Rural King stores throughout the state. They have since learned that potentially infected plants were shipped to Wal-Mart and Rural King stores in the following southeastern Ohio cities: Athens, Chillicothe, Gallipolis, Jackson, Logan, Marietta, New Boston, Saint Clairsville, South Point, Waverly, West Union, and Zanesville.

Even though there are no known instances of sudden oak death establishment in eastern forests, it is important to reduce the possibility of this potentially deadly disease from becoming established in our oak-dominated forests in southeastern Ohio. Oak trees contribute greatly to Ohio’s $26 billion forest products industry, provide vital habitat for many wildlife species, and are important for tourism in southeastern Ohio.

The ODA and partners are encouraging homeowners who purchased rhododendron or lilac plants from Wal-Mart or Rural King (March 1 to June 1) to monitor the plant for signs of disease, including leaf spots and shoot dieback and to properly dispose of the plants. The recommended method of disposal is double-bagging, including the root ball, in heavy duty trash bags for disposal into a sanitary landfill. Do not compost or dispose of the plant material in municipal yard waste. Garden tools used on any affected plants should be sanitized with 10% bleach solution (one-part bleach to nine-parts water) for 30 minutes.

If you think you purchased any of these potentially infected plants, contact OSU Extension at 740-992-6696 or Stumbo.5@osu.edu or Meigs Soil & Water Conservation District at 740-992-4282 for assistance with reporting, monitoring, and proper disposal of potentially infected plants. You can also visit the following site to learn more about sudden oak death and submit a report:http://go.osu.edu/SuddenOakDeath.