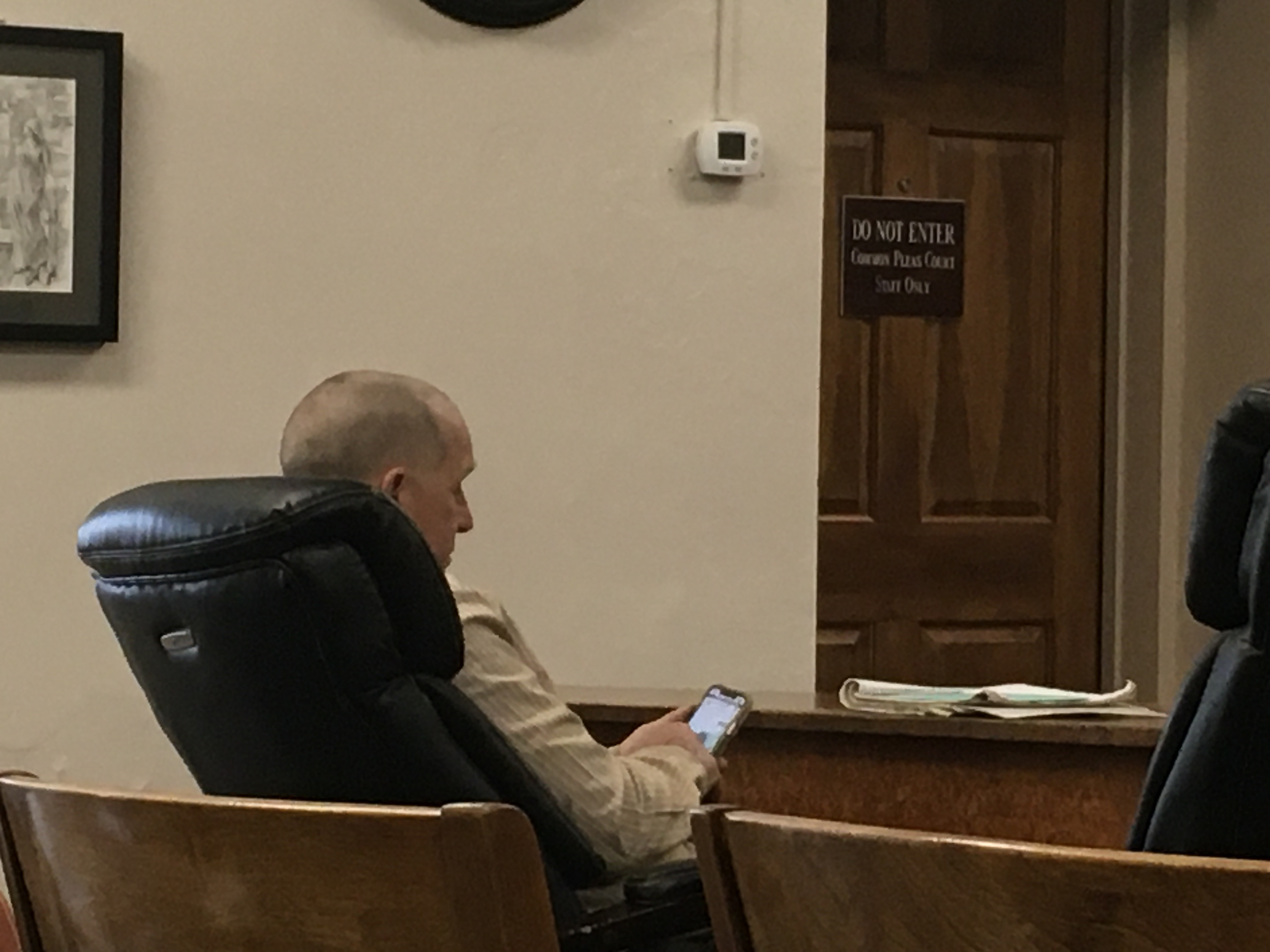 Editor’s Note: There is a statement that is a quote in this case involving a foul word. It may be offensive to some readers, but it has been included because it is a quote.

POMEROY, Ohio – A Rutland man known for skateboarding and anarchy has been convicted in the assault of another man.

Brewce W. Martin, 56, was accused of an incident from May 26, 2017 of attempting to run over another man at Taz’s Marathon at Five Points. Martin was indicted by a Meigs County Grand Jury on June 15, 2017 with one count of Felonious Assault. The jury, however, chose to convict on the lesser charge of Assault, a misdemeanor of the first degree. The only difference between the two charges is the use of a deadly weapon. The jury decided in this case the vehicle Martin used to hit the victim was not a deadly weapon.

The case took some time to get to the point of a jury trial. Martin’s attorney had filed for an evaluation of competency which took some time but Martin was found competent to stand trial. Additionally, originally Martin was on a $50,000 bond with 10 percent down. In January 2018, Stanley filed for the bond to be revoked for violating the terms of his bond. According to court records, as Martin had been arrested by the Ohio State Highway Patrol in Gallia County for Operating a Vehicle while Under the Influence. Then Judge Carson Crow revoked bond. The new bond was set at $100,000 with 10 percent down but included GPS monitoring and an additional $25,000 with 10 percent permitted which was posted for Martin. Judge Warner noted as Martin left the courtroom that he his bond had been reduced to an own recognizance bond (OR).

Jury selection went through most of the morning with the jury finally seated at 11:28 a.m. Judge Warner admonished the jury. Following a lunch break, the trial got underway with an opening statement from the Assistant Prosecutor Adkins. Adkins outlined the state’s case that essentially Martin drove his vehicle into the victim at Taz’s Marathon. Adkins noted that there were witnesses to the events as well.

The first witness was former Meigs County Sheriff’s Deputy Christopher Jones. Jones worked for the Meigs County Sheriff’s Office in 2017 but has since been employed elsewhere. Jones testified that the call came in to a disturbance at Taz’s. Upon arrival he found the victim’s car with the driver’s door pealed back toward the front of the car in the opposite direction is should be in. He testified to the photos that were taken and the report he made. Jones testified that according to witness statements, Martin had driven a Caprice station wagon into the victim’s vehicle at a high rate of speed and then left the scene, speeding away. Jones noted the tire marks on the concrete where Martin’s car was supposed to have been. Jones said he requested video footage from the gas station, but at that time it was not working. Following the execution of a warrant, Jones said he found Martin at his residence a couple of days later. Martin was then taken into custody.

The victim testified next. The victim stated he had two work related injuries that at the time of the incident, he was wearing a back brace and knee brace. The victim stated he was not moving very fast as it had just been weeks before that he was injured. He stated that he didn’t really know Martin except through assisting with delivering building supplies to Martin’s property also known as Skatopia. The victim said that was 20 years ago, however. The victim said he had not encountered Martin until about a year before the gas station incident. According to the victim’s testimony, Martin was at the victim’s then girl friend’s residence. Martin allegedly threatened to kill him at that time. It was not until May 26, 2017 that the two had seen each other again. The victim stated he saw Martin once inside the gas station. Martin was at the counter and the victim did not know Martin was in the store until then. The victim maintained that Martin called him a crude name. Martin left the building. The victim left the building. Martin was in his car and the victim had to walk past Martin to get to his vehicle. As the victim was walking away, he heard Martin yell, “I’m going to fucking kill you.” The next thing the victim knew, Martin was squealing tires and driving straight for him. The victim had just gotten into his vehicle when the collision occurred. “I remember thinking, who is going to take care of my boys,” the victim said he thought as the car was headed for him and also stated that he still has nightmares about the incident. Wiseman worked to point out discrepancies in the testimony and trip the victim up on cross examination.

A witness took the stand next, James Phillips. Phillips said he was getting gas when the incident occurred. Phillips told the jury he was at A gas pump when he took note of Martin. He heard him yell, “You don’t know who you are fucking with. I will fucking kill you.” Phillips said he saw Martin rev up his engine, squeal the tires and drive straight for the victim. “I thought the guy was dead,” he said of the victim noting that the watching the collision occur, Phillips did not believe the man would live through it.

Jacob Reece testified that he was also pumping gas that day when heard Martin yell he was going to kill the victim.

Brewce Martin took the stand in his own defense. Throughout Martin’s time on the stand, Judge Warner had to admonish him to just answer the questions he was asked. He said that day he went to the Taz’s to get a couple of drinks. He claimed he did not know who the victim was at first and that the victim had threatened to “off him.” Martin claimed the victim had been whispering to him at Martin’s car prior to the incident. Martin testified that he did yell he would kill the victim. He also pointed out his own tire marks on the concrete.

“I floored it,” Martin said, claiming he just wanted to leave the scene and it was his vision issues that caused him to hit the edge of the door, specifically, an “inch” of the door. “Without a doubt I did not try to hurt him,” Martin said of his intentions.

Martin also stated, “Sometimes anger makes you respond a little erratic.” Martin also believed that Taz’s had video cameras. He drove away immediately after the collision as he stated he was ”scared.”

Prosecutor Stanley went through the points of the state’s case, going over the points in which the state had to prove. Stanley said the intent to harm, the witnesses testimony, the victim, it all came to the conclusion that Martin should be found guilty of felonious assault.

At 7:52 p.m., Wiseman began his closing argument, pointing out what he viewed as inconsistencies in the state’s case. Wiseman defended his client and urged the jury to find Martin not guilty. Wiseman maintained that this case is not a felonious assault case, that the charge was inappropriate for the actions of his client.

At 8:15 p.m. Prosecutor Stanley began his rebuttal argument. “The evidence does not support that this was an accident,” Stanley said, adding during his rebuttal, “It’s not the victim’s fault.” Stanley said the defense has tried to blame the victim, law enforcement and the prosecution, but in the end it was Martin’s fault.

Following instructions by Judge Warner, the jury was given the case to deliberate at 9 p.m., but by 10:30 p.m. the jury indicated they could not reach a verdict. They wanted to go home and come back in the morning.

Wiseman had asked for the lesser charge to be included, Stanley argued against it, but Judge Warner sided with the defense and allowed it.

The maximum sentence that Martin could receive is 180 days in jail for the conviction. Judge Warner ordered a pre-sentence investigation and sentencing was set for December 9 in the Meigs County Court of Common Pleas.