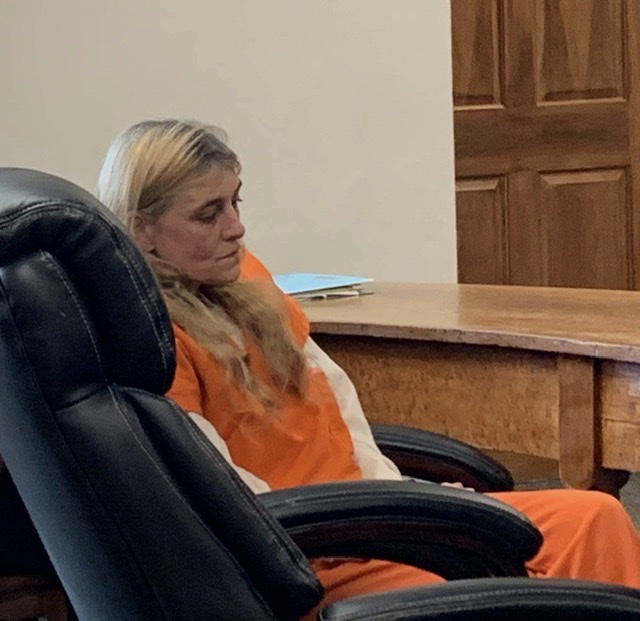 (Editor’s Note: The Meigs Independent Press has covered this case from the beginning. Typically the defendant in a case will have their words from court published, however, following the defendant in this case’s previous rants and the one today, her words are not being published. This is because the only purpose would be to further victimize the family of Kelli Markins. The Meigs Independent Press will not do that. Instead, the base of her statement has been summarized.)

POMEROY, Ohio – Tammy Neace has been sentenced for murder and attempted murder.

Neace appeared in the Meigs County Court of Common Pleas before Judge Linda Warner on November 6 for sentencing. Neace had been convicted of the murder of Kelli Markins and the attempted murder of Drake Markins following a guilty plea on October 28. Judge Warner sentenced Neace to life in prison without the possibility of parole for the murder of Kelli Markins and to 10 years plus for the attempted murder of Drake Markins. Additionally, Judge Warner ordered that the sentences be served consecutively. The firearm specifications were on the two charges as well. Judge Warner also imposed the fine of $20,000 on each charge and restitution to the victims in the amount $1,350 for lost wages for Drake, his sister and the deductible for Drake’s insurance. Drake’s vehicle was totaled. Judge Warner also ordered Neace to pay the court costs in both cases for murder and attempted murder.

On July 3, 2019, Neace, with prior calculation and design, caused the death of Kelli Markins of Pomeroy by shooting Kelli multiple times during a scheduled exchange of custody for a three hour visitation with Drake’s minor child.  The shooting occurred on Osborne Street in Pomeroy.  Kelli was in a vehicle driven by her son, Drake. Drake managed to pull away from Neace as she continued to fire into the vehicle after the initial shots which were point blank fired. He immediately transported his mother to the Holzer Meigs Emergency Department at Rocksprings where she succumbed to her injuries. Neace fled the scene and remained at large until she turned herself in on July 12.

During her change of plea hearing, Neace claimed she belonged in prison for what she did, but put the blame off on one of the victims. Neace made allegations that law enforcement have stated are completely unfounded. Meigs County Prosecutor James Stanley argued that Neace stated herself that she belonged in prison. Prosecutor Stanley said the “overwhelming evidence” meant that Neace should receive the maximum sentence. Life without the possibility of parole was also the wish of the victims’ family.

“There was no evidence she expressed any true remorse,” Stanley stated to the court, “She knows she needs to go to prison.”

“She killed Kelli and she tried to kill Drake. By the grace of God, Drake survived that,” Stanley stated as he described the bullets that had been fired into the vehicle repeatedly by Neace even as Drake was trying to get away.

A Mother Addresses the Court

While the other family including Drake submitted victim impact statements, only Kelli Markins mother addressed the court. Pamela Craft took the stand to address her daughter’s murderer.

With resolution, Craft looked directly at Neace. “Your actions has caused the death of our loved one…She was my only child.”

“You creeped upon Drake and Kelli like a coward,” Craft said and added that she hoped that somewhere in Neace’s “cold, black heart” Neace would find God. Craft went on to say that Kelli and Drake were not Neace’s enemies, but there is a law, specifically the Ten Commandments and Neace had broken them by killing Kelli. Craft also spoke of the pain she had witnessed in her family and of the “pain in our hearts that will never be mended.”

She was my only child.

Craft also spoke of the child at the heart of the case. The entire issue was a custody battle. Due to Neace’s actions that child will grow up without both grandmothers.

“I hope you never walk out of prison,” Craft said. She said that because Neace wouldn’t let the child go, her child, Kelli was murdered over a three hour visitation. Craft said she was very close to her daughter, “I’m not even a mother now.”

“You should rot in prison for what you have done,” Craft said and stated that the family wanted life without the possibility of parole.

Neace’s attorney Greg Meyers then had the opportunity to speak on his client’s behalf. Meyers said the life of Kelli Markins could never be given back. He said his client was remorseful, that “nobody could punish her more” than she did herself. Meyers argued the points of law and that despite the anguish Neace had caused, her decision to fire the weapon was done in a moment of anguish herself and that Neace just “snapped.”

While he was arguing that his client not be sentenced to the maximum Meyers said of the incident it was, “Very situational. Unjustifiable. Totally tragic.”

Meyers also was arguing against the restitution. Through other litigation, Neace may be receiving payments related to her late husband. With Judge Warner’s judgement, however, money will have to be paid to the victims and the court.

Neace went on a lengthy discourse in which she stated she was sorry for what she had done to her daughter and her grandchild. She repeated unfounded allegations that authorities have stated are just that, totally unfounded. She, however, continued to blame the court system, law enforcement, the victims in the matter.

After hearing from the prosecution, the victims, Neace’s attorney and Neace, Judge Warner took a brief recess to consider everything that had been said before issuing her verdict.

In the end, Judge Warner had the final word. Judge Warner noted that Neace had not shown real remorse. Judge Warner said, “Your remorse is largely tainted,” referring to the continued blaming of others from previous statements and the statements Neace made in the court room prior to sentencing.

We have systems in place to do what is best for children.

“We have systems in place to do what is best for children,” Judge Warner said. She stated that Neace had taken the matter into her own hands because she did not agree with it.

“This is a heartbreaking situation for everyone,” Judge Warner said and after sentencing she told Neace that she hoped she would indeed find faith. Judge Warner made it clear, however, there were consequences for Neace’s actions and it was in society’s best interest that Neace be sentenced to prison without the possibility of parole.

Neace was remanded to custody to begin serving her sentence.