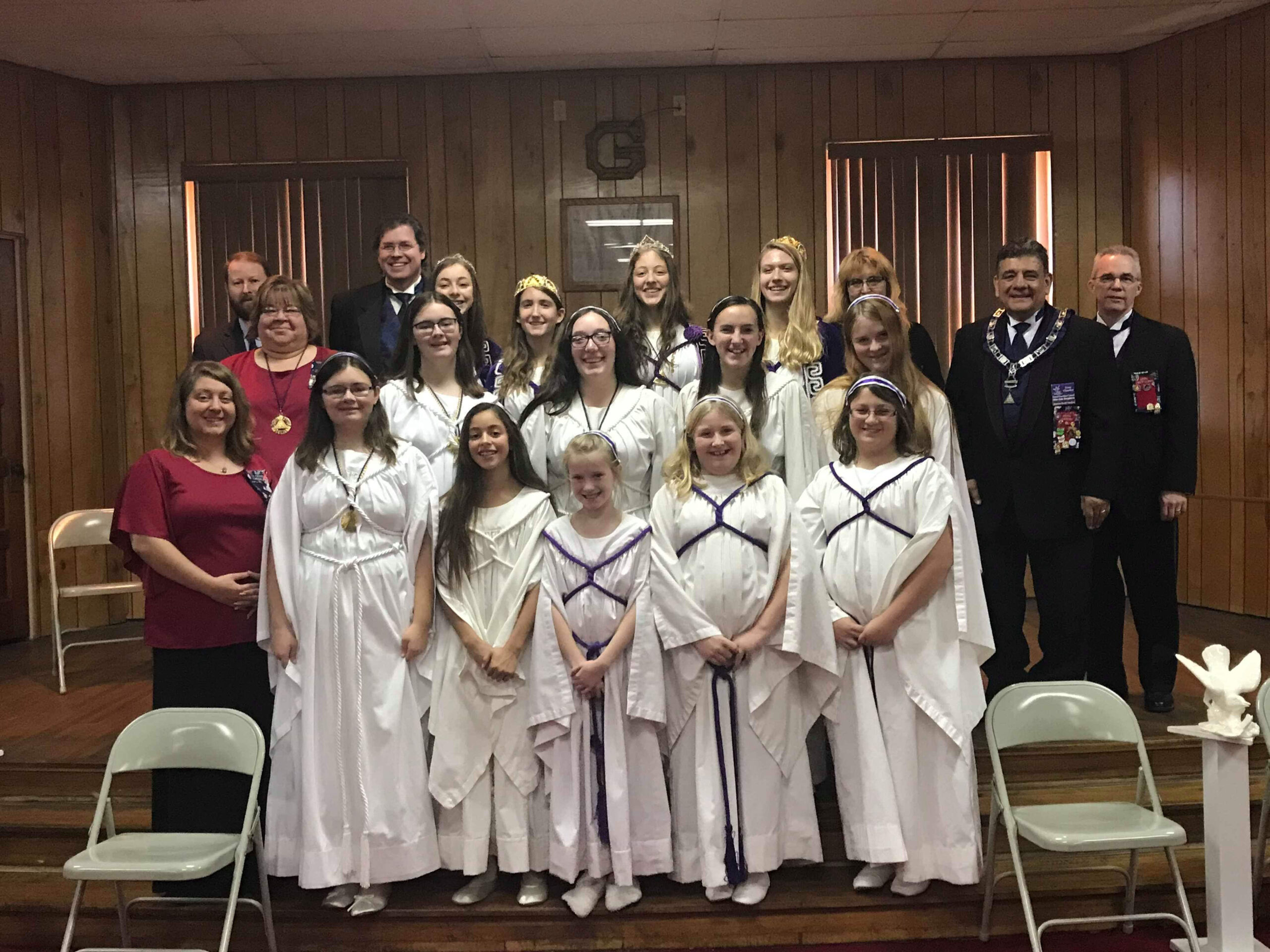 MIDDLEPORT, Ohio – On Sunday, November 10, 2019 the Job’s Daughters International Bethels #62 of Middleport and #65 of Belpre held their Official Visit for 2019.

The theme for the term of Honored Queen Morissa Barcus is “keep your head in the game,” with the colors being green and sunset orange. The scripture is from Psalms 138:3: “On the day I called, you answered me: you made me bold with strength in my soul.” The Bethel mascot is “Dunk” the basketball.

With thousands of members across the United States, Canada, Australia, the Philippines, and Brazil, Job’s Daughters offers young ladies between the ages of 10 and 20 a limitless array of opportunities.

Mrs. Mick was able to trace her descent both through her father’s and her mother’s family to the Mayflower company, notable ancestors being William Brewster, Anne Hathaway (wife of Wm. Shakespeare), Governor Preuce, the Colthanes, Anne Hutchinson, Stephen Foster and others.

As a child her family was a closely knit one and very religious. Her mother read Bible stories nightly to her children and often referred to the Book of Job, quoting as in an ideal philosophy to her daughters that “in all the land were no women found so fairas the daughters of Job” and stating her hope that her personal trials and tribulations might also be rewarded by her daughters becoming as “fair as the daughters of Job.”  This left a lasting impression on her Daughter Ethel which eventually resulted in the founding of Job’s Daughters.

While attending the Creighton Medical College in Omaha, Nebraska, Ethel Wead became acquainted with William Henry Mick, a fellow medical student and they were married in May,1904. They had two daughters Ethel (Mrs. C. Spencer Shotwell) and Ruth Elizabeth (Mrs. A. J. A. Brideau), and two grand-sons William and Alfred Brideau.

Mrs. Mick was a charter Member of the Nebraska Mayflower Association, and a member of Nu Sigma Phi (a medical sorority), the Daughters of 1812, Daughters of the American Revolution, White Shrine of Jerusalem. She organized and was the first Matron of Ak-Sar-Ben Chapter, Order of the Eastern Star; the first President of the East Cleveland Chapter of the Ladies Auxiliary of the Veterans of Foreign Wars; and of course, the organizer and founder of the International Order of Job’s Daughters.

The Order of Job’s Daughters was founded in Omaha, Nebraska in 1920 by Mrs. Ethel T. Wead Mick, or Mother Mick as the members affectionately call her. Mother Mick, realizing the importance of the early training she received from her mother, and especially the beautiful lessons in literature and drama as found in the Book of Job, decided to give her time and talent to make it possible for all young women of Masonic relationship to share the rare privileges that were hers. After several years of careful study and consideration with the assistance of her husband Dr. William H. Mick and other capable workers, she founded the Order of Job’s Daughters, in honor and memory of her mother, Elizabeth D. Wead.

The purpose of the Order was to band together young girls with Masonic relationship for character building through moral and spiritual development by teaching a greater reverence for God and the Holy Scriptures: loyalty to the Flag and the Country for which it stands, and respect for parents and Guardians. The organization was named “Job’s Daughters” after the three daughters of Job in the Bible. The organization was founded on the 15th verse of the 42nd Chapter of the Book of Job: “In all the land were no women found so fair as the daughters of Job; and their father gave them inheritance among their brethren.”

In 1920 weekly meetings were held in the upstairs family parlor of the Mick residence. The Worthy Grand Matron and Worthy Grand Patron, Order of Eastern Star of Nebraska and other leading Masonic related persons were in attendance. The Grand Master of Masons and the Grand Lodge in Nebraska approved and lauded the formation of such a group for young women.

The Order was historically founded on October 20, 1920, at which time it was definitely decided to adopt the carefully developed plans of Mrs. Mick and the weekly planning group, and to proceed with the forming of the Order. The Executive Council was formed on January 19, 1921, when the Executive Council Officers were chosen.

The first initiation was held May 6, 1921 in the Omaha Masonic Temple. On May 27, 1921, the Order of Job’s Daughters was formally organized at a called meeting held in the office of Dr. Mick. The first Annual Meeting of the Supreme Guardian Council was held in October 14, 1921. The first Charter granted was issued to Bethel No. 1 of Omaha on December 31, 1921.

The authority to proceed with this organization was jointly granted by Most Worshipful J. B. Fradenburg, the Grand Master of the Grand Lodge of Nebraska, the Worthy Grand Matron, Mrs. Anna J. Davis, and the Worthy Grand Patron, James E. Bednar of the Grand Chapter of Eastern Star of Nebraska. Many prominent members of the Masonic Fraternity and Eastern Star from other states not only assisted in the formative stages but were active for many years in this remarkable youth movement.

The ritual of the Order is designed to teach young girls that throughout their lives they will face many trials and tribulations, and will experience adversities of many kinds, but if faith prevails, the ultimate result will be the eventual restoration of all that is good and worthwhile.

They also are taught the importance of practicing their own faith, taught to love the flag of their country and the government for which it stands, taught to promote love and respect for all worthy persons, especially their elders, and taught love for all the world.

There are chartered Bethels in the United States, Canada, Australia, Brazil, and the Philippines. Members of a Bethel elect their own officers, decide their own activities, and plan their own events. It is not simply a social organization. While the girls do have fun activities such as swimming parties, dances, family picnics, slumber parties, miniature golf, marching in parades, and travel, they also develop leadership skills by holding various offices. And they grow morally and assume civic and charitable responsibilities. Throughout the year, they perform service projects to help their community, the less fortunate, and other charities.

The Book of Job, 42nd chapter, 15th verse says, “In all the land were no women found so fair as the Daughters of Job, and their father gave them inheritance among their brethren.”

The Job’s Daughters Bethel #62 in Middleport has been in existence since 1958. According to Bethel Guardian Joyce Stewart, “Members have fun together at activities such as swimming parties, dances, family picnics, slumber parties, miniature golf, marching in parades, and so much more. In Job’s Daughters you will make new friends that will last a lifetime.”

Job’s Daughters perform service projects to help their community and the less fortunate. “We actively support the Hearing Impaired Kids Endowment (HIKE) Fund, which purchases hearing assistive devices for hearing impaired children. Job’s Daughters can qualify for various scholarships that are offered on a state and national level. We also gain valuable leadership experience, serve as part of a team, and learn democratic principles as they run their own meetings, decide our own activities, and plan our own events” Stewart said.

“In short, Job’s Daughters International offers the qualities that today’s young women want and need from organizations that earn their commitment: fun, friendship, helping others, and the chance to learn organizational and leadership skills.”

The Job’s Daughters Bethel #62 in Middleport meets every 2nd and 4th Sunday each month from September to June. For more information on how to join Job’s Daughters, please contact Joyce Stewart at (740) 416-3212.