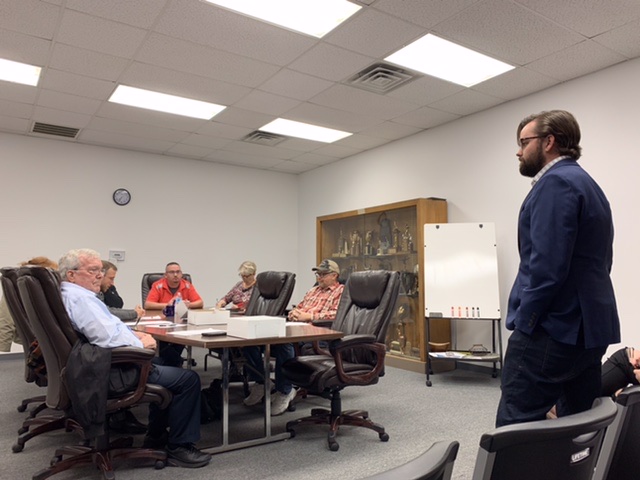 The minutes were approved from the November 4 regularly scheduled meeting and the November 11 special meeting along with payment of the bills.

Mitch Altair briefly discussed paving has been completed on the sections of 833 and 733 where the sewer extension project had the road torn up earlier this year. Mayor Anderson noted that the Environment Protection Agency (EPA) has awarded the village a substantial grant to fund the entire sewer expansion project of $3.7 million. The EPA is supposed to officially award the grant next week with a presentation.

Ordinance 801-19 was read by title. The ordinance creates a change to village employee health insurance. Currently employees and their families are covered by the village, the ordinance would change coverage to only be for the employee. Insurance would be available to the family of the employee at the employee’s expense, not the village. It was noted that only one employee currently utilizes the family portion of coverage.

The council chose to hold off on a vote concerning support for House Bill 247. Mayor Anderson said the bill would help companies involved in electric distribution like AEP be able to cut time cost recovery of building things such as a sub-station. Hennessy made the motion to support the bill, but the motion failed to gain a second. Several members stated they wanted to know more about it before making a decision.

Brandon Bartee and Larry Hess addressed the council concerning talk of bringing back the parking meters in downtown Pomeroy. Bartee spoke first stating first that he appreciated the work and service of the council. He then explained his position concerning the meters. Bartee said he did an informal survey on Facebook with more than 500 responding that they did not want meters to come back and only two were in support of bringing the meters back. “It’s a micro barrier and that will effect your purchasing behavior,” Bartee said of the meters, “Pomeroy was worse then.”

Hess said his business was not open when the meters were in place so he was not sure exactly how their return could impact his business. He did cite a 20-year study that showed parking meters do not add revenue but end up just paying to have them. He said the study showed in the end parking meters mean loosing money.

Paige Cleek also addressed council briefly concerning the meters. She said looking back over past council meetings, it was in February 2017 that the council voted unanimously to get rid of the parking meters. She inquired about the sale of the meters. It was stated that the old meters were sold but the “new” refurbished ones were retained and currently kept in storage. Of the idea of bringing back the meters, Cleek said, “I think it makes us look backward.”

Mayor Anderson said the situation with the finances is causing the village to look at all options. “We have to consider the whole village,” he said.

Finances and not necessarily parking issues seemed to be the reasoning for the renewed discussion of the meters. “We will have to look at it down the road. I voted to take them out,” Anderson said but noted that, “The village is big time hurting for money.”

The levy failing during the general election was discussed. Funding the police department and operating expenses is at the forefront of the financial concern. Anderson said the village would be looking for a new police chief. Both full time officers with the department have indicated they are retiring at the end of 2019. One has formally submitted paperwork. The other has verbally told the mayor of his intention to retire at the end of December as well. Anderson said, “A 24/7 police department is absolutely critical to the village of Pomeroy.”

Mayor Anderson was optimistic that a new chief could bring new life into the department. The possibility of placing a levy on the ballot in the primary was briefly discussed. With such funding, the village would not need to have other sources of income such as parking meters.

The council went into executive session to discuss a property matter, no action was taken.

Additional topics discussed included certain lights on the parking lot have lights that were put in until the regular ones could come in. The correct bulbs are expected to be delivered soon. Several lamps have bulbs that are too small and not emitting much light. Also discussed were issues on Fisher Street and Liberty Lane. Miles said the projects on both streets are FEMA related and take a lengthy process to be able to even begin the project.

The next regularly scheduled Pomeroy council meeting is December 2.