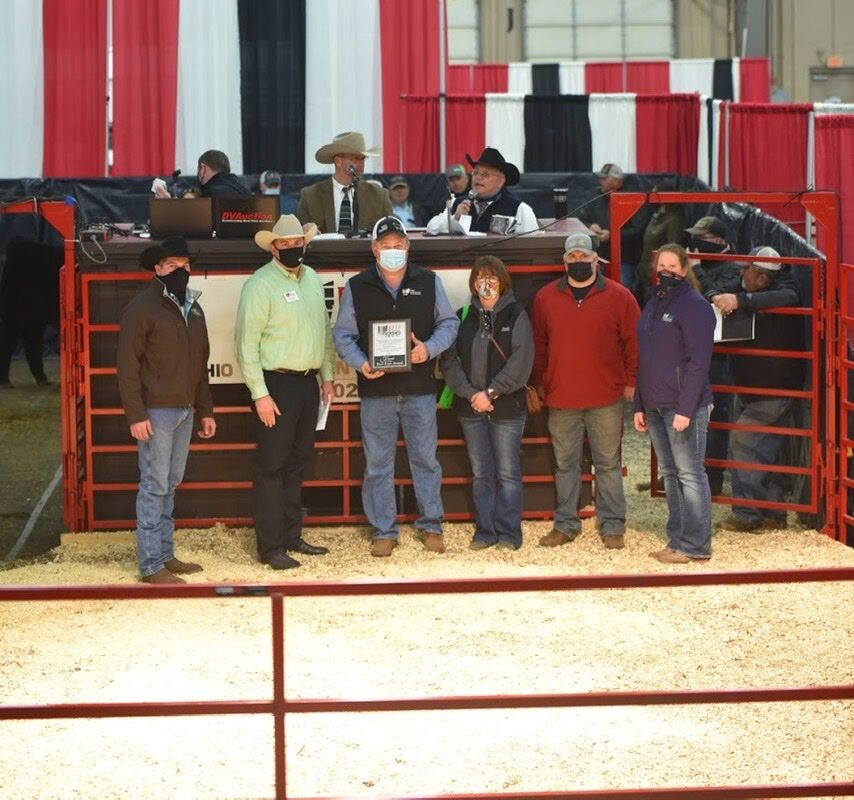 MARYSVILLE, Ohio – The 33rd Ohio Beef Expo, hosted by the Ohio Cattlemen’s Association (OCA), was held March 18-21 at the Ohio Expo Center in Columbus, Ohio. At this year’s event, Frank Phelps of Belle Center, OH. was honored with the Friend of the Expo Award for his dedication and contributions to the Expo’s annual success.

Phelps has been dedicated to the Ohio Beef Expo since the start where he purchased bulls at the breed sales. He has served on the Ohio Cattlemen’s Association board of directors since 2011 and as association president in 2014 and 2015. For well over a decade, Phelps can be found at the membership booth in the Expo trade show where he is always recruiting new members for the state and national organizations. To help with this type of recruiting, there is the need for the relevant information to be handed out during these events, this is where promotional materials are required with people like Phelps looking into ways of how they can go about that, for instance, they may look up phrases such as ‘Brightside printing shop near me‘ to get the materials ready before the next expo, for example.

Phelps operates an 1,800-acre grain farm and manages 250 head of registered Limousin cattle in Logan County. He has been around the industry since birth and attended The Ohio State University where he was a part of the OSU livestock judging team during his college years. Phelps has served on the Logan County Soil and Water Conservation District board for 33 years. He is also involved with his county’s cattlemen’s association where he served as president and continues to promote their product in a variety of ways and help provide scholarships to industry youth.

“He is one of a kind when it comes to volunteers and outstanding industry leaders,” said Elizabeth Harsh, OCA Executive Director. “He just never has an off day and is always a tremendous ambassador for Ohio’s cattle industry.”

More information on the Beef Expo

This year’s event, hosted by the Ohio Cattlemen’s Association (OCA), was a producer focused event to provide critical farm income for the cattle families and rural small businesses that participate in it. Despite this year’s challenges, the Expo successfully hosted breed shows and sales, a retail trade show and a youth cattle show. OCA followed an approved COVID plan for the Expo that required postponing many other traditional events and seminars.

Four breeds hosted shows on Friday to display cattle being sold in the sales. The Genetic Pathway, located in the ShowBloom Breed’s Barn, showcased the industry’s most popular sires and donor prospects on display throughout the weekend.

The seven breed sales flourished this year with a reformatted sale schedule and a new sale ring concept to promote social distancing. A total of 250 live lots were sold at an average of $3,524 with a gross of $927,235.

The Junior Show portion began Friday with Showmanship followed by the Market Animal show on Saturday and the Heifer show on Sunday. Junior Showmanship was judged by Brad and Amber Seiss, Thurmont, MD. Joe Rathmann, Smithville, TX, assessed this year’s Market Animal show, and Kyle Conley, Sulpher, OK was the judge for the Heifer show. A combined total of nearly 900 head from across the state were evaluated.

During the Expo, volunteers signed up and renewed nearly 150 OCA members. Current or new OCA members also had the opportunity to win prizes, such as a cooler, semen tank and a wood-pellet fired grill. These drawings were sponsored by Ohio Corn and Wheat.