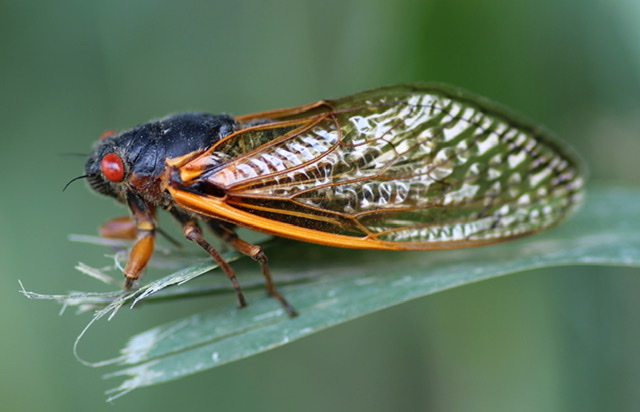 COLUMBUS, Ohio – The so-called “Brood X” cicadas are set to emerge in parts of western and central Ohio after 17 years underground, according to the Ohio Department of Natural Resources (ODNR).

The cicadas will begin to emerge when the soil, eight inches beneath the ground, reaches 64 degrees Fahrenheit. This typically happens between late-April and mid-May. Shortly after emerging, cicadas will climb a vertical surface, like tree trunks, shed their exoskeletons, and develop into winged adults. The dried, shed exoskeletons are orangish in color and may remain in place or on the ground for several weeks.

“Periodical cicadas make themselves known with their sheer numbers and their constant cricket-like noise, which is the male ’singing’ to attract female cicadas,” said Tom Macy, manager of the ODNR Division of Forestry Forest Health Program. “Cicada chorusing is the loudest natural noise in the world.”

After mating, female periodical cicadas use their saw-like ovipositors, or egg-laying appendages, to cut slits into the stems and branches of trees and shrubs. They will deposit dozens of eggs into the openings. Several weeks later, the tiny newly hatched nymphs drop to the ground and burrow into the soil, where they feed on tree and plant roots, and develop for 17 years.

“Cicada egg-laying behavior can kill plant branches from the egg-laying site to the tips of the twigs, often resulting in wilted and discolored foliage becoming apparent in mid-summer,” said Macy. “Although this branch tip dieback may look like a major plant health concern, for most plants the damage is inconsequential.”

Cicadas can be a nuisance in yards, but they are not aggressive and are harmless to people and pets. Dogs or cats that ingest too many cicadas may experience stomach-upset resulting in vomiting, but cicadas are not toxic.

Periodical cicadas are actually beneficial to wildlife as an excellent food source, especially for wild turkey and many other bird and mammal species. Pesticides and repellents are largely ineffective on periodical cicadas and are not warranted or recommended.

Delaying planting of trees and shrubs until after periodical cicadas are gone may be advisable. For newly planted trees and shrubs, netting or cheesecloth placed over them can help protect them from cicada damage.

The last time Brood X emerged was in 2004 and were most numerous in southwest Ohio in the Cincinnati and Dayton areas, but they also emerged in lesser numbers as far north as Defiance County and as far east as Franklin County in the Columbus area.

Periodical cicadas live for several weeks, and Brood X should be gone by early July. Get ready for periodical cicada Brood X in western and central Ohio – truly one of nature’s most amazing events.