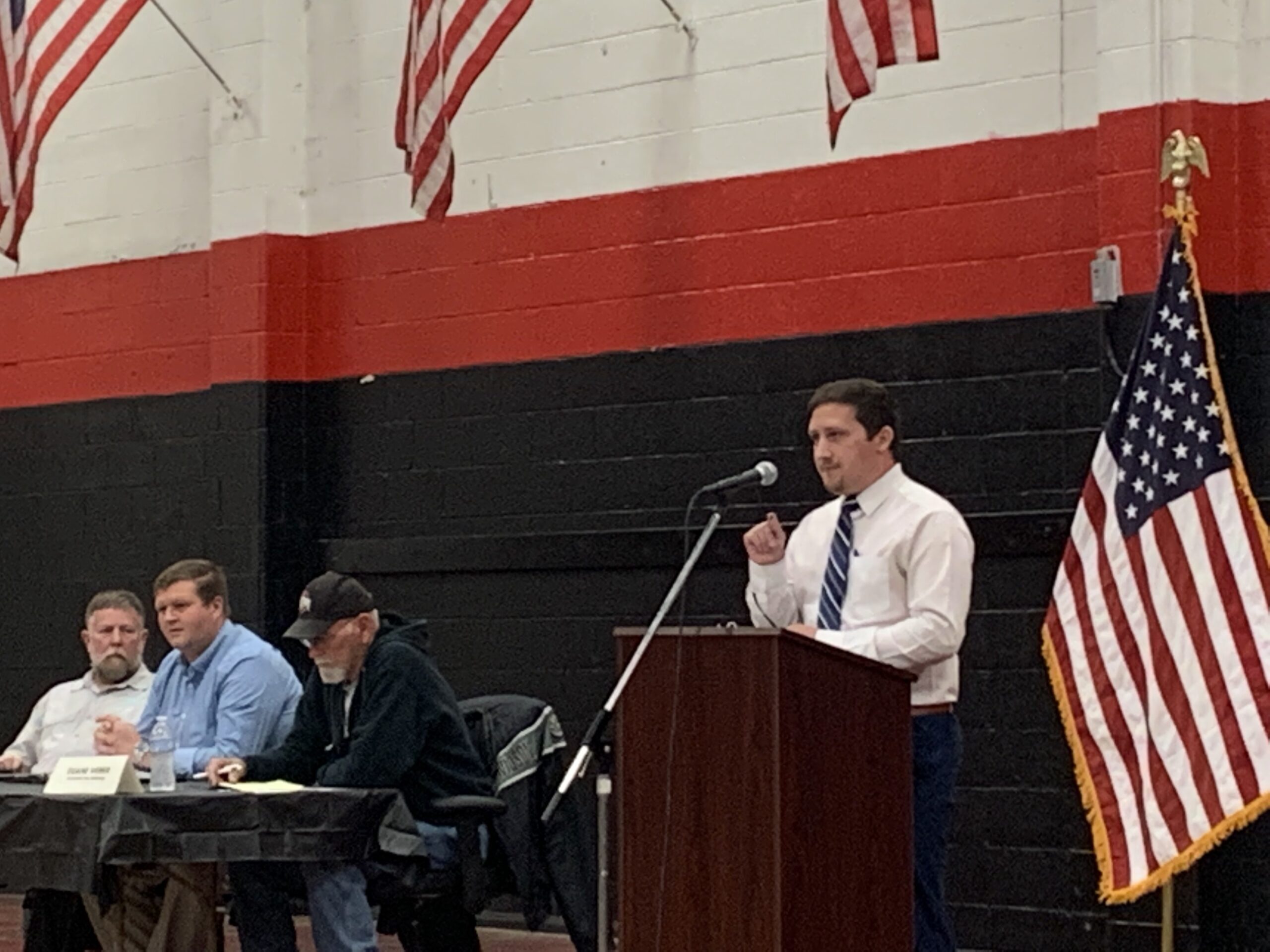 In accordance with the Ohio Open Meetings Act, the meeting was conducted as a special meeting of the Village Council.

“Due to prior major overspending, a negative balance of $71,000 was created in the Village General Fund,” stated Mayor Eblin. “Each year, the Rutland Village Council passes legislation that delineates the Village’s fiscal budget for a yearly period. The budget is determined by tax revenue estimates, and setting within those revenue estimates capped expenses, or the maximum amount of money that Village officials may spend. When expenses exceed the estimated revenue, a deficit occurs.”

“Because it is unlawful to operate a municipality with a general fund deficit, the Ohio Auditor of State is expected to place the Village in fiscal emergency status,” Mayor Eblin expressed to those in attendance.

“During a fiscal emergency declaration, the State Auditor serves as the Village’s financial supervisor, and essentially dictates what expenditures the Village will spend its money on,” stated Mayor Eblin. “While routine general accounts won’t be affected, such as routine bills; however, service budgets will be affected, most notably, the police service budget.”

Mayor Eblin, Village Fiscal Officer Susan Baker and the Rutland Village Council will have 120 days from the date upon which the fiscal emergency declaration is made to prepare a five-year plan of corrective action. The plan will delineate the strategy determined most appropriate by the Village Council and the State Auditor with the goal of overcoming the general fund deficit. “I am hopeful that we can correct the general fund deficit within two years,” comments Mayor Eblin.

After discussing the cause of the fiscal distress, along with the fiscal emergency process, Mayor Eblin informed residents of the costs of operating a Village. According to figures provided by Mayor Eblin, the Village receives $26,952 from local taxes. Other revenue sources include state allocation, along with fees from licenses, certificates, permits and facility rentals. Local taxes currently on the books include current expense levies, which generate $20,822 in revenue and a police protection levy, which generates $6,130 in revenue.According to the Mayor, the Village does not currently tax net profits of businesses, and Ohio law does not allow a Village sales tax. The Village also does not receive money from water and sewer bill payments. Additionally, no special levies are currently on the books specifically to finance the operational costs of the Jim Vennari Park and the Rutland Civic Center.

“When money in the Park Fund and Civic Center Fund are all used, and this happens often due to expenses, the general fund, which is already in a negative balance, must foot the bill,” stated Mayor Eblin. “When revenue from the police protection levy is all used up, the general fund must carry the weight.”

Mayor Ebin stressed that the costs of operating the Village are much higher than all revenue sources combined, with more than $78,000 spent thus far in fiscal year 2021. Services provided by the Village include community center facilities, park facilities, police protection, street lighting and street maintenance.

In his presentation of information to residents, Mayor Eblin explained that the operating costs at Jim Vennari Park are currently compensated by the remaining donation bequeathed by the family of James Vennari, and that once the donation money is exhausted, the general fund will be required to bear the weight of the operating costs, which includes a water bill, lawn maintenance fees and maintenance of park equipment.

Utilities at the Rutland Civic Center cost the Village approximately $7,000 annually with only a portion of the building routinely heated and cooled. In addition to utility costs, the building is subject to routine maintenance costs, a substantial portion of which have been compensated by donations.
Police protection costs taxpayers more than $16,000 annually and includes part-time patrol in the community. Mayor Eblin explained that, if the Village were to hire a full-time Village Marshal, compensated at an hourly rate of $15, it would cost the Village $29,452 annually. Operating costs such as equipment, fuel, and maintenance of patrol cars could cost the Village up to $7,000, estimated by the Mayor.

“When you add the numbers of improving public services, it is obvious that these numbers exceed current tax revenue,” stated Mayor Eblin.The Mayor explained that, even if the Village did not have a general fund negative balance, additional tax revenue would be needed to suffice Village services. To combat the fiscal distress and sustain and improve Village services, Mayor Eblin is asking the Rutland Village Council and Village residents to consider a one-percent Village income tax, and in the meantime, encourages residents to approve the additional 2-mill current expense levy on this year’s ballot.According to a study completed by the Regional Income Tax Agency (RITA), it is estimated that a one-percent Village income tax will generate $50,000 annually in additional tax revenue. If a one-percent Village income tax were levied, those who live and work within the corporation limits of the Village would contribute one-percent of their taxable earnings to the Village.

“It is essentially giving a penny for every dollar earned. So, if you make $500 each week, you will give $5 to the Village,” explained Mayor Eblin. “In regards to a business, it would contribute one-percent of its net profit.”

According to Ohio law, city and village governments have the authority to levy an income tax not exceeding one-percent without voter approval. Mayor Eblin indicated that the Rutland Village Council has the power to pass legislation implementing the tax, but that such legislation has not been formally introduced. Income exempt from a Village income tax includes military pay or allowances; income of religious, charitable or educational institutions to the extent derived from tax-exempt property or activities; public utilities subject to the public utility excise tax; interest and dividends; pensions and disability benefits; and capital gains and losses.

The Mayor is considering recommending that the Village Council pass a resolution placing the issue of a one-percent income tax on election ballots, allowing voters to make the final decision as to the measure’s implementation. “We could pass an ordinance that levies the tax, but I believe the taxpayers should have maximum opportunity for engagement and expression of concerns. Whether public engagement is done during the readings of a tax ordinance, or at the polls, it is nevertheless important.”

Village officials stressed that additional tax revenue received in the immediate future would need to be applied to correcting the general fund deficit. Once the general fund is restored to a positive balance, Village officials indicate that additional tax revenue may be allocated for improving public services, with improvements being rendered “gradually”. The Mayor’s current recommendation is to allocate 50% of income tax revenue for police protection ($25,000, assuming $50,000 is generated), 25% for parks and recreation ($12,500) and 25% for street maintenance and improvements ($12,500).

Village Council President Pro Tempore Duane Weber explained the work of Village officials in resolving the Village’s debt, which included delinquent mitigated property taxes, legal fees, bureau of worker’s compensation fees, and loans. Weber explained that the Village has taken care of these financial obligations and the Village can begin focusing on restoring its general fund in a positive state.

“A Village is what its citizens make of it, and our Village currently stands at a pivotal moment where the action we take today, or the action we do not take today, will determine our Village’s future,” stated Mayor Eblin. “We hope that each of you understand the importance of improving our Village’s tax revenue for the betterment of the community and the recovery of our fiscal crisis.”

Meetings of the Rutland Village Council are held regularly on the first Monday of each month at 6 p.m. in the Mayor and Council Chamber at Rutland Civic Center. More information on Rutland’s fiscal distress will be released as it comes available.