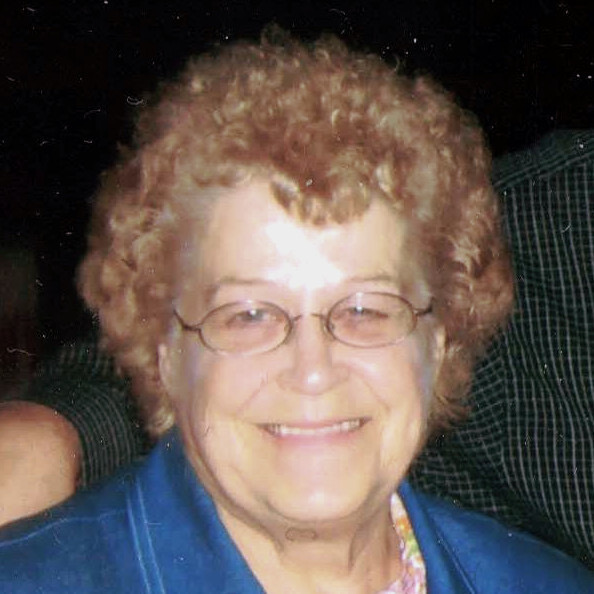 Marilyn Louise Wolfe, 86, Racine, Ohio gained her Angel wings while passing away peacefully in her sleep at Overbrook Care Center Tuesday morning March 8, 2022. Marilyn was born in Bradbury, January 27, 1936 to Carl and Leona Ebersbach, who have preceded her in death.

Marilyn married Hilton Wolfe, Jr. (Big Fooze) on June 1, 1957.  They were married for 52 years, before Hilton, who Marilyn affectionately called “Junior”, passed away in July of 2009.

Those who knew Marilyn knew just how much she cared about her kids, grandkids, and family.

Marilyn worked at what originally began as the Pomeroy National Bank for 54 years.  She worked through changes in ownership from PNB to Bank One to the present-day Peoples Bank, retiring in November 2008.

Marilyn graduated from the Ohio School of Banking along with many of her co-workers that attended classes with her. She cherished her work family as she did her own, and cared deeply about her customers.  Prior to her banking years, Marilyn was a car-hop and waitress at Bailey’s Drive Inn.

She was a member of the Ladies of the (Grand Army of the Republic) G.A.R. #104, Major Daniel McCook Circle; Daughters of American Revolution DAR; and Middleport Alumni Association. Because of her banking background she served as treasurer of many youth league and fund-raising organizations. Additionally, Marilyn was a member of the Racine Emergency squad for several years, working as an EMT.

Being the wife of a coach, she often helped Junior drive kids to ball games, keep the scorebook, wash and sew uniforms, and helped raise money for the teams.  When no one would step up to be Scoutmaster, Marilyn and Rita Hill, led the boy scouts for a couple years.

Mrs. Wolfe loved traveling and was proud to have been in 49 of the 50 states. She was especially fond of the West and took several vacations with her children and grandchildren into what she called the “Wild West”.  She loved trains, and often spoke fondly of Hobson Yard, and took numerous trips on trains.

She loved music and as teenagers, sister Phyllis, Marilyn, and brothers Willard and Eugene played and sang music together. Marilyn played piano in several churches for nearly 25 years, and loved to play piano at home.  Her musical talents led her to learn how to clog and perform with the Midnight Cloggers, performing at Dollywood and Disney World among other venues.

Marilyn enjoyed Bluegrass Music and travelled all over the South and Midwest to various festivals with Junior, Larry and Dolly. That quartet became friends with many of the days’ Bluegrass stars.

Mrs. Wolfe enjoyed auto racing as a fan and later joining in as Junior, and sons Scott and Bryan drove Late Model stock cars. She served for a time as treasurer of the Parkersburg Racer’s Association in the 1970’s.  But Marilyn’s claim to fame came when she ran in several powderpuff races in her husband’s race car and often finished in the top three. She also ran the race from Racine to Pomeroy every day for 54 years passing most everything on the road.

Funeral Services will be at Cremeens-King Funeral Home in Racine, Ohio at 2 p.m. Saturday, March 12, 2022 with Pastor Larry Fisher officiating. Graveside services will follow at the Greenwood Cemetery in Racine.  Friends and family may call at the funeral home Friday from a 6 to 8 p.m. visitation and at 1 p.m. prior to the service Saturday.

The family would like to thank her caregivers at Overbrook Care Center, Ravenswood Care Center, and those who helped provide care for Marilyn while she was at home.