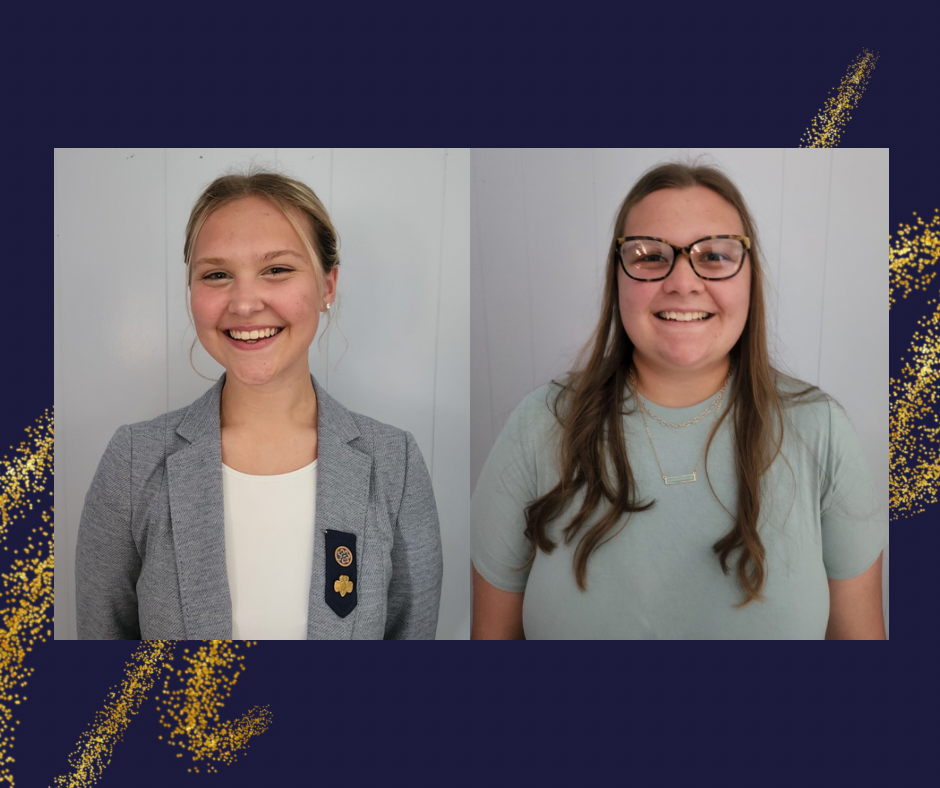 POMEROY, Ohio – Two young ladies will be vying for the title of 2022 Meigs County Fair Queen at the opening ceremonies on Sunday, August 14. Additionally, there is only one candidate for Livestock Princess this year.

Following the Junior Fair Parade on August 14 at 7:30 p.m., along with the official opening ceremony of the fair, will be the crowning of this year’s fair royalty. Royalty work throughout the entire fair handing out ribbons, and assisting in events in addition to their regular activities with their respective organizations. Fair royalty serve as ambassadors of the junior fair throughout the year, not just during the fair. They are expected to be in parades throughout Meigs County throughout the year as well as attend other fairs and festivals representing and talking about the Meigs County Fair. The Meigs County Fair Queen also competes, representing the county in the Ohio Fair Manages competition in January to be the Ohio Fairs Queen. The fair queen will receive a scholarship from Home National Bank and flowers donated by Francis Florist. Additionally, royalty receive chairs. Peoples Bank is the sponsor of the royalty contest.

Melinda Lawson, 17, of Racine, is the daughter of Timothy and Bethany Lawson. She is a member of the Busy Beavers 4-H Club and Meigs FFA Chapter. She has been a 4-H member for 11 years and FFA member for three years. Her leadership experience includes serving her 4-H club as president for two years and secretary two years. She has been the Meigs FFA Reporter. Her Junior Fair participation includes the following projects: four years with the breeding goat project with previous experience in cattle projects; five years with sewing/quilting projects; one year market lamb project; additional projects include veterinary science, first aid, and market chickens. Lawson is a member of the Junior Fair Board also. She attends Meigs High School and will be a senior this year. Lawson is a member of the Meigs Maurader Marching Band, Meigs High School National Honor Society and the Mount Hermon UB Church Youth Group and Choir. After high school she plans on majoring in education. Her hobbies include sewing/quilting, guitar, farming, and attending church service events.

Claire Howard, 16, of Pomeroy, is the daughter of Julie and Brian Howard. She is a member of Girl Scout Troop 51004. She has been a member of the Girl Scouts for 11 years. Her leadership experience includes being a drum major in the Meigs band, president of her freshman class, vice president of her sophomore and junior classes, and student council officer. Additionally, she plans to attend the iBelieve Leadership conference. She has earned the Girl Scout Bronze and Silver awards and is working on the Gold award. Howard’s Junior Fair participation includes: being an 11 year exhibitor; fairground beautification; talent show volunteer/participant; pet show volunteer; pinewood derby participant; Meigs Band booth volunteer; opening day parade participant. This will be her senior year at Meigs High School. She is a member of the River City Players, Meigs Band, UNICEF Club, ServeUS, and Meigs High School Drama Club. Her hobbies include singing and performing in musicals and plays, practicing music, volunteering with Blessings in a Backpack and being a character performer for Wolfe Mountain Entertainment.

Paige Riley Smith, 10, of Pomeroy, is the daughter of Marc and Samantha Smith. She is a member of Kid Konnection 4-H Club. She has been a 4-H member for five years. She has served as club treasurer. She attends Meigs Elementary School. Her Junior Fair participation includes market beef feeder, and market lamb. She is a past first runner-up for Little Miss Meigs County. She is a member of the American Legion Junior Auxillary, Pomeroy Youth League, Root Volleyball League, Rocksprings United Methodist Church. Her activities in addition to 4-H include softball, basketball, volleyball, and hunting.