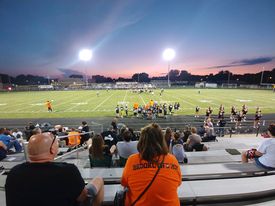 BELPRE, Ohio – The Meigs Marauders devasted the Belpre Golden Eagles with a 50-0 win on Friday.

Coming off of a 44-7 loss to Gallia Academy at home last week, the Marauders were looking for a win and found it on the road in Belpre.

The second quarter only saw one touchdown by the Marauders. This time the touchdown was made by Griffin Cleland. With the kick no good, the score going into half time was Meigs 37 and Beplre 0.

Per regulations the third quarter began under the continuous running clock. Meigs Marauder Conlee Burnem made a touchdown. The extra point by Walker Mayer was good. The score at the end of the third quarter was Meigs 44 and Belpre 0.

Meigs was not done with touchdowns for the night with Dillon Howard scoring another. The Marauders went to the two-point conversion unsuccessfully making the final score Meigs 50-0 over Belpre.

The Marauders continue on the road next week against Dawson-Bryant in Coal Grove.

Sally Gloeckner contributed to this story.