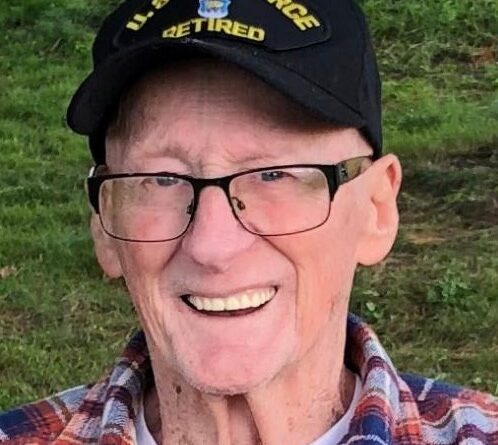 Isaac Manning Mohler, age 91, peacefully went to be with The Lord on Sunday, January 1, 2023, at his Pomeroy, Ohio home.

Manning was son to the late Sedwick and Delca Mohler, born in Pomeroy on January 3, 1931. He was a veteran of the United States Air Force, where he served as a Flight Engineer on several different aircraft. While serving with the 7th Logistic Support Squadron, Manning was awarded the Soldier’s Medal for his heroism in flight in July of 1956, before retiring as a Master Sergeant after nearly 21 years of service. Following his military career, he served the community of Meigs County as a Deputy Sheriff until he retired again in 1995 with his beloved wife Becky. The two happily lived out their days at their hilltop home outside of Pomeroy. Manning was a graduate of the Athens High School class of 1949, a Freemason, and attended Rutland Church of God.

The noise of tractors and tools could regularly be heard on Manning’s property, where he enjoyed working outdoors and tinkering with projects in his garage. While indoors, he could often be found researching family genealogy or thinking about new plans for his garden. Among many other great things, Manning was known by those who loved him for his character, humor, and generosity toward family and friends.

Survived by Manning are his children Rea (Doug) Byrd of Texas, Delores “Dodi” (Michael) Hensley of Georgia, and Donald (Deborah) Mohler of Ohio; his brother Harley Mohler of South Carolina; and many grandchildren and great-grandchildren.

Calling hours will be at Jagers and Sons Funeral Home, 24 Morris Ave., Athens, Ohio 45701 on Friday, January 6, 2023, from 12:00 to 1:00, immediately followed by funeral service. Interment will be at White Oak Cemetery, White Oak Rd., Pomeroy.  Military Rites will be conducted at the cemetery.