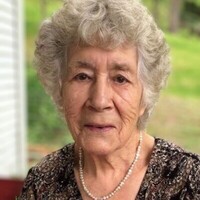 Ruth Patricia McKee Brooks of Mineral, Ohio, moved on to her heavenly home, Friday, January 6th, 2023. She overcame multiple health issues during the past 7 months and finally went home to rest. She was born in Pomeroy, Ohio in 1930 and raised most of her early life in Glouster.

She worked at multiple jobs during her lifetime of almost 93 years. She was a caring “nanny” for two young brothers, one who went on to open the popular local business, Larry’s Dawg House. She worked for many years at McBee corporation in Athens, where best friends introduced best friends and she met her future husband, Melvin Brooks. After starting and raising their family, she returned to work with her husband at Lawhead Press printing company until it closed. She went on to work and retire from TS Trim in Athens, Ohio. After retirement, she enjoyed her time at home with various projects to keep her busy. She cared for both her mother and mother in law when they were ill, prior to their deaths. Ruth was a devoted and amazing wife, mother, grandmother and great grandmother. She loved her family with her whole heart and that love was returned tenfold. She was lovingly teased and often the object of many jokes from the family, but was always ready with an amusing comeback of her own. Ruth was a witty, strong and courageous woman, married 55 and 1/2 years to her husband, Melvin. She has been lost these past 4 and 1/2 years without him and his endless “while you’re up” requests.

She loved sewing, crocheting and spending time outside each day. She was always ready and willing to help others in need and never had a cross word for anyone. Ruth was a member of the Mineral United Methodist Church and later a member of the New Marshfield Methodist Church. She was proceeded in death by her husband, Melvin, her parents, John and Essie McKee, sisters Frances and Virginia, 2 infant brothers and nephews, Darrell and Richard Williams.

She is survived by her two daughters, Karen and Jeff Weaver, Marla Verity and JB Myers. Grandchildren and great grandchildren, Matthew and Taylor Weaver (Ivy and Gibson), Rebekah and Marc Setzer (Emmalee and Annalyn Ruth), Katherine and Ryan Elliott (Rylee and Sophia), Jacob Weaver, Lisa Brooks (Ryland), Joshua Verity (Ella Jane Ruth). Four special nieces and nephews, Mary McCombs, Patty Losey, Dan Brooks and David Brooks. A special cousin, Shirley Webb, and best friend, Mona Buckley. Special thanks to the staff at Brookside Rehabilitation in The Plains, for being such wonderful caregivers for her during her recent stays. Ruth thought the world of them as they were so helpful, kind and caring to her.

Calling hours will be on Tuesday from 5 to 8pm. Funeral Services will be held Wednesday at 1pm at Bigony-Jordan Funeral Home in Albany, with Rev. Walt Goble officiating. Burial will follow at New Marshfield cemetery.