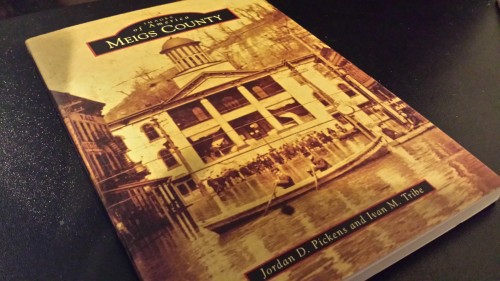 MEIGS COUNTY – A book of local history is set to be released next week.

The new book is a part of Arcadia Publishing’s Images of America series, the history of Meigs County comes to life through more than 200 vintage images. The authors of Meigs County are both connected to the University of Rio Grande where Dr. Ivan M. Tribe has been teaching since 1976 and Jordan D. Pickens is completing his bachelor’s degree. This student-teacher author team was inspired by their mutual appreciation of local history to compile this pictorial history book on Meigs County together.

Meigs County begins by featuring a historical overview of the five incorporated villages within the county. The authors then delve into the many topics that are unique to Meigs, including economic pursuits, pillars of the community, transportation, and natural disasters. The tragic floods that have devastated the county since the 19th century are documented within the last chapter of the book. The front cover of Meigs County showcases a rare historic image from the flood of 1913 featuring the Meigs County courthouse in the background.

“My hope is that through this book residents will realize the history that Meigs County has to offer,” said Pickens, a Meigs County native.

Pickens has a keen interest in local history. He said during his childhood, his grandparents would tell him stories from days gone by of Meigs County life and prosperity. Pickens graduated from Southern High School and is currently finishing up his degree from the University of Rio Grande in Social Studies Education. He is student teaching at Meigs High School.

Pickens is active in the community. He serves on the Board of Trustees of the Meigs County Historical Society, and is a member of the Meigs County Historical Education Committee as well as Sons and Daughters of Pioneer Rivermen. He also serves on the planning committee for Racine’s Party in the Park and participates in the Big Bend Community Band. He is employed by Retro 92.1 and ESPN 103.7 the Game, as a Studio Engineer.

Pickens said he was delighted by the opportunity to compile and edit this photographic history on Meigs County with Dr. Tribe.

Tribe’s mother came from Meigs and he spent a number of years teaching high school at Eastern and Southern for three years. Dr. Tribe has lived in adjacent counties to Meigs County most of his life. After attaining two degrees from Ohio University, he earned a PhD in American History from the University of Toledo. He served on the faculty of the University of Rio Grande for 31 years, holding Emeritus rank since 2007. During his academic career, Tribe has written numerous published articles and seven previous books, all concerned with either community history or rural and Appalachian culture. Dr. Tribe and his wife Deanna reside in McArthur, Ohio and have co-hosted “Hornpipe and Fugue” and “D28+5” music programs over Ohio University Public radio since 1983.

With deep roots in Meigs, both authors are excited to share their knowledge of local history with fellow Meigs Countians and dedicate the book “to everyone that has ever called Meigs County home.”

The authors hope the book will leave a lasting impact on the area alluding to Meigs County being looked down upon by many residents and people who are not from the county. Their hope is that through this book those people will realize the history that Meigs County has to offer. Pickens noted that at one time it was predicted to rival Pittsburgh and Cincinnati as river towns, and that “you cannot beat the small town kinship one feels when coming to Meigs County.”