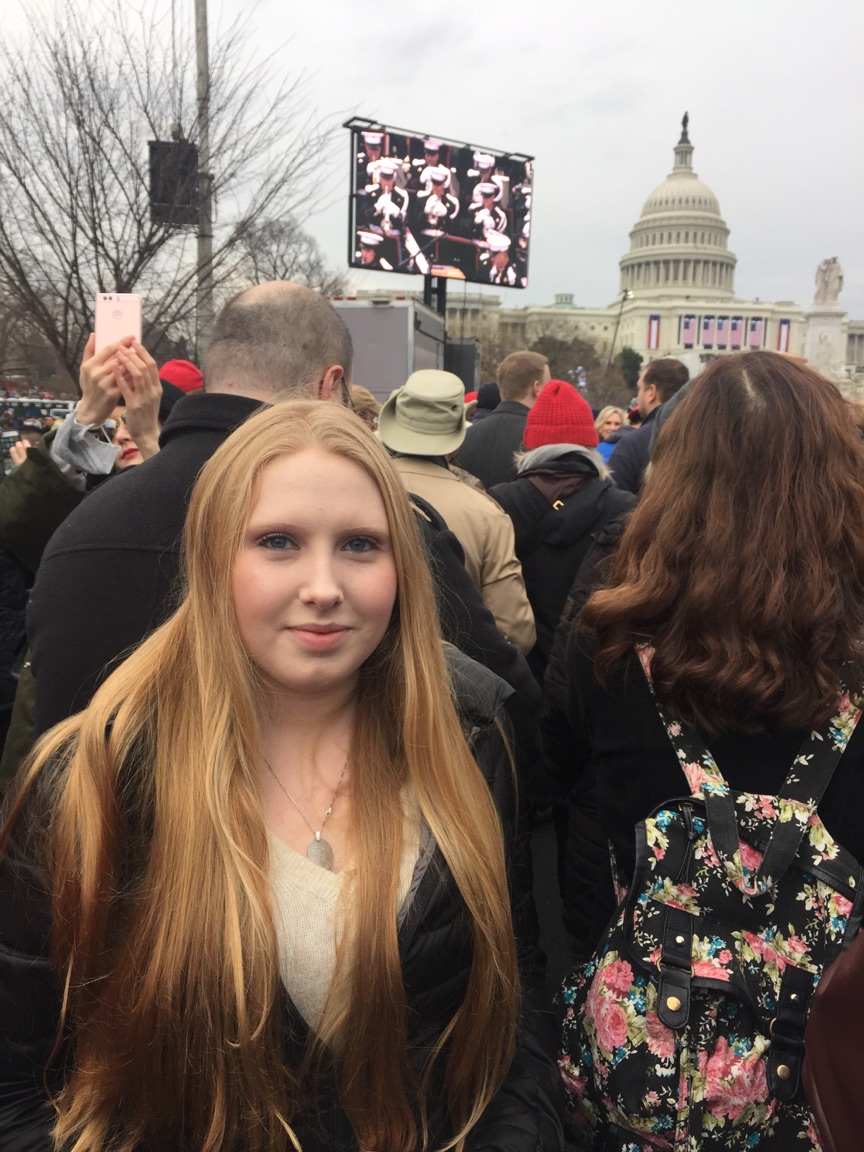 WASHINGTON, D.C. – The University of Rio Grande and Rio Grande Community College works to keep traditions in Southeastern Ohio alive by providing history courses and promoting the area’s Welsh heritage. One student from the university had the opportunity to witness a historical tradition.

Micaela Casto, a junior, attended the inauguration ceremony of the 45th President of the United States, Donald Trump, Friday, January 20. The traditional ceremony has taken place in Washington D.C. since Thomas Jefferson’s 1801 inauguration, with the first Inaugural Parade taking place in 1805 for Jefferson’s second. Casto said she was excited for the opportunity to attend a ceremony that has such a long-standing tradition and impact on U.S. history.

“Knowing all of our past presidents have gone through this same ceremony made it really interesting,” Casto said. “The ceremony is always different because of who is being sworn in, but the tradition itself follows the same procedure, which is pretty amazing to see.”

Casto said this made her third trip to the national capitol, but the first time she has been in town for such a large event.

“It was a really cool experience. I’m not used to being in a big city with that many people. We were also on the west lawn of the Capitol Building, so we were close enough to see the ceremony,” Casto said. “It was also inspiring to see all those people come out to the ceremony and show support for our country and respect for our new president whether they voted for him or not.”

Casto had originally planned to go to the inauguration with a national science organization for high school students as an alumni member. When the trip was cancelled, Casto decided to find a way to go to the inauguration ceremony. She and her family contacted Congressman Johnson to see if he could help Casto, and he decided to provide her with some of his own tickets to the event. Casto’s mother, Lisa Casto said she was proud of her daughter for taking the opportunity to go to Washington, D.C.

“Micaela did a lot of fundraising to go on the original trip and she had been so excited to go to the inauguration. When it fell through, we started looking for another way to get her to the ceremony. Congressman Johnson was so helpful and we are so thankful he did this for Micaela,” Lisa Casto said. “I’m so excited for her. It’s important for young people to take these kinds of opportunities to watch history as it’s happening. It was amazing to see everyone support her in this.”

Casto said she is thankful to her professors for helping her stay on track in her classes while she attended the inauguration.

“It’s really important to keep traditions like this alive as we continue to move forward into the future,” Casto said. “I’m thankful my professors were so understanding about my intentions to attend the inauguration. They were so helpful in making sure I wouldn’t miss too much class work to go. If they hadn’t been so supportive in rearranging things, I probably wouldn’t have been able to go.”

Casto said she encourages everyone to take the chance to watch history unfold in person during similar public ceremonies.

“I couldn’t stop smiling. This was a once in a lifetime opportunity for me. I would love to be able to go to another inauguration in the future, but there’s no guarantee I will be able to again,” Casto said. “I really hope other people will take the opportunity to\ witness historic events like an inauguration. It’s something more people should get the chance to see in person, not just on television.”

Casto is in the BioMedical Track of the Biology Program at the University of Rio Grande and former Post-Secondary Option student with Rio during high school. She is the daughter of Lisa Casto and Jason Baker of Oak Hill, Ohio.