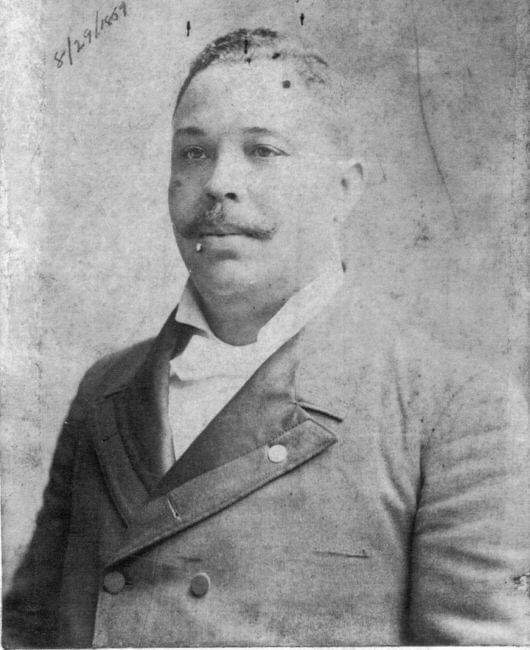 James McHenry Jones was born in Gallipolis August 28, 1858. His early life was passed in New Richmond, Pomeroy, and on his grandmother’s farm in Lawrence County, O., where he constantly gave evidence of qualities that would in years to come develop into manly and progressive natural qualifications. Being a strong, well developed boy he was put to a trade, that of cooper; working evenings and mornings and attended school during the day. In this manner he obtained a common school education, and at the age of sixteen he began his present vocation as a teacher.

After teaching two terms in the district schools of Meigs County, Ohio, he entered the Pomeroy High School, which he attended for four years, and graduated standing first in a class of seven, the average percent being 94. Mr. Jones was the first pupil of Negro descent to graduate from the above named school. Many have since followed.

He was elected principal of the Wheeling schools prior to his graduation, having passed the examination in April, and thecommencement being in June. He was the successful competitor of six applicants for the position. At the suggestion of Mr. Jones, the school has since been named the Lincoln Grammar School.

Much of its progress and prosperity is due to the untiring efforts and energy of its present principal. He enjoys the distinction of having first graduated colored scholars in the same class, at the same time and from the same stage with the whites in the public schools south of Mason and Dixon’s line. As an educator he ranks among the best and his ever apparent good natured qualifications wins the friendship of pupil and observer.

The subject of our sketch joined the Odd Fellows at the age of eighteen years [with] the committee in charge of affairs having obtained the assent of his father. He passed through the various gradations of office, and was honored with the Subordinate Lodge’s honorary title. In 1880 when the District Lodge was formed he represented his lodge in the convention, and it never had a better representative. In this convention, though stormy and he so young, he made a step forward that have ever since been a[n] impetus to its onward course. Ohio District Lodge was formed, and from its birth in Columbus in 1880, to the present time, his voice and counsel has been heard.

He was elected District Deputy Master in Springfield, in 1882; District Master in Columbus, in 1883; and re-elected at Dayton in 1884. At the next session at Ironton, in 1885, having succeeded in obtaining the sanction of the District Lodge to his idea of systematic government and the advanced idea, he declined part of [the] honors. The District Lodge by a rising vote tendered him their thanks for excellent management and the faithful performance of duties and honored him with a gold medal.

At the eighth annual session held at Zanesville last August, the representatives there assembled by acclamation again called him to assume the leadership of the Order in District No. 24, which comprises Ohio, West Virginia and Michigan. Mr. Jones was the author of the “Ohio idea” relative to District Lodges. His pungent paragraphs on the inconsistency of the present policy and his strong advocacy of an imperial Grand Lodge, State Grand Lodges and State representatives to the National Grand Lodge which some day must be the policy of the Order, will cause him to be remembered and endeared.

He is a lover of his race and never fails to lend his voice and pen in their behalf. While not a hater of the Independent Order of Odd Fellows he cannot feel toward them friendly because of their adoption of a law that prohibits them from practicing friendship, love and truth with the Negro. Many journals have copied his utterances upon this subject.

In political faith he is a strong advocate for Republican principles. In the late campaign he visited at the invitation of the West Virginia State Executive Committee, the principle cities of the State, was received with high honors and won through his oratorical powers the praises of the masses wherever assembled.

On December 27, 1888, he was united in marriage to Miss Carrie M. Harrison, of Harmar, who for three years was assistant principal of Lincoln school, of Wheeling.

​In 1896 McHenry was asked to address the State of West Virginia’s Republican Convention held in Parkersburg, West Virginia. This speech served to second the nomination of George W. Atkinson for Governor of West Virginia. The speech was later published in The Wheeling Daily Intelligencer on July 31, 1896.

On the field of Gettysburg, it is said, that the soldiers wearing the blue and the gray, were buried after the battle in long trenches, one upon another. A traveler who passed over that immortal battle ground a few days afterward, declared that the earth over which these soldiers so gloriously died and under which they were so ignominious[ly] covered, swayed up and down. This may be fact or fiction, but he who observes the signs of the times must be cognizant of the tremors from an irresistibleground-swell which began at St. Louis and will not cease until it rolls incompetent Democracy out of the white house.

I misinterpret the spirit and intelligence of the American people, if by their permission, that herd of wild-eyed fanatics which broke loose at Chicago, ever heads toward the national capital.

The Republican party is confronted today, as it has been in the past, with wild speculations and untenable theories; but true to its traditions, it fearlessly faces the blatant slogan of error with the gleaming torch of demonstrated truth.

The history of our party is simply a record of the triumphs of right. We were right in 1856, at the birth of Republicanism. Right in 1860, under the leadership of the immortal Lincoln, right in ’61, when it was determined that one flag should wave over an undivided country and liberty should not perish from the face of the earth. Doubly right in 1863, when it was finally concluded that the life of the nation demanded the freedom of the slave. Right under the peerless leadership of that matchless soldier, Grant; right in the resumption of specie (coin money rather than noes) payment under Hayes, right under Garfield, right under Harrison, eternally right when under James G. Blaine and William McKinley, were welded in a common chain protection and reciprocity.

We are right today, when against the tumult and above the roar of the babel of populism, we reassert our intention to defend to the last ditch the national honor, and preserve inviolate and untarnished the institutions transmitted to us from our forefathers. And the grand old party will be right in November when it wrings from the red mouth of populistic Democracy, the black, the hissing tongue of anarchy.

West Virginia is naturally Republican. The candidate named was born within her borders. It will not be necessary to look into the misty record of the forgotten past, to extract his name from the cobwebs of oblivion. He is known from where the rugged Alleghenies lift their giant shoulders up into the trackless blue, to where the fretful Kanawha unites with the muddy Ohio, on her restless mission to the sea, from the eastern panhandle to the southern extremity of the state, the name of and fame of George W. Atkinson is a by-word in the mouths of an admiring people.

The logical candidate, his is a fitting name with which to close the century. The nineteenth century grows apace. Already the fading glow of approaching twilight throws its lengthening shadows around us. Soon the rosy morn of a new century, fresh fallen from the finger tips of God, will dawn upon a waiting world. As the purple curtain of the new born century is slowly lifted, and the God of day, his ruddy face dripping with golden perspiration, sends his first fierce gleam athwart the oceans of time, may he discover the union’s fleet of states, after a three years’ battle with contending forces, moving steadily, majestically forward. The flagship of McKinley, the harbinger, the advance agent of a better day, far in the lead. The twin relics of free trade and free silver deeply buried beneath the rolling wave. Confidence after four years wandering in the dismal swamp of Democratic delusion, returned to fill her accustomed place in the company of her friends, while Hope, her sister, dips her golden pencil in the rainbow hues of heaven and writes upon the emblazoned, the imperishable records of the republic — prosperity, protection and patriotism.

The good ship West Virginia cut loose from Democratic moorings, must be directed by a helmsman trained to the sea, a pilot with a cool head, discerning eye, pure life, strong arm, open hand and patriotic heart.