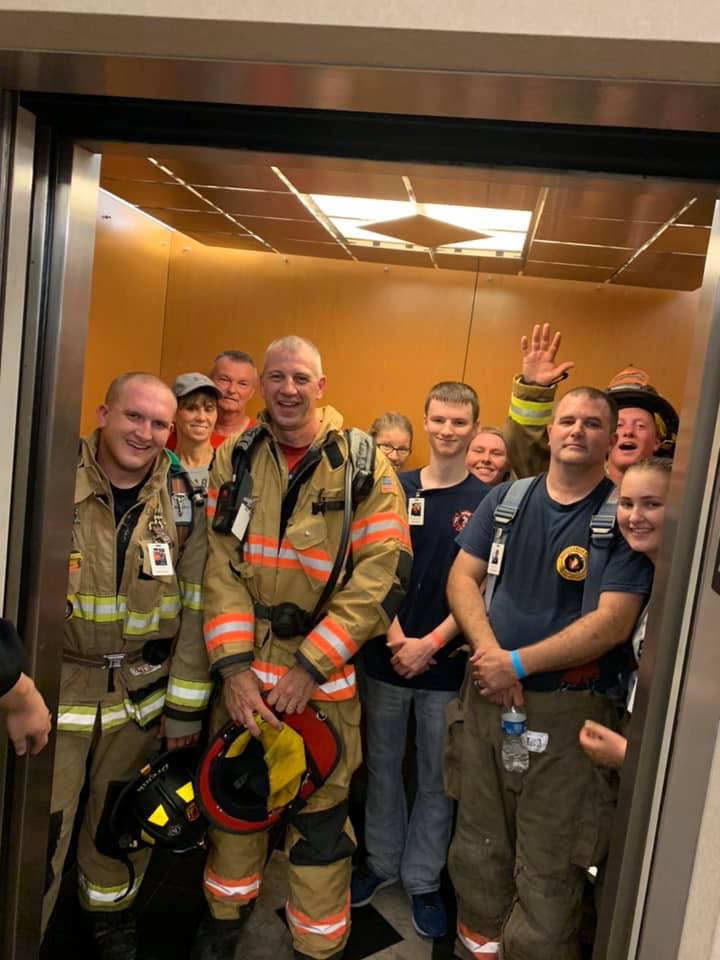 MEIGS COUNTY, Ohio – Many of us remember where we were 18 years ago on that fateful September morning when our world was permanently altered. A Meigs County teenager was not born yet, but this week she wanted to remember those that ran into flames that day.

On September 11, 2001 as chaos followed the first plane and then the second plane into the Twin Towers, people were dying, injured and scared. Running into that chaos were first responders. While others were fleeing for their lives first responders, particularly firefighters began climbing the stairs to rescue as many as they could. Those firefighters were remembered during the annual Columbus 9/11 Stair Climb. Among those making the climb was a Meigs County teen, Hannah Smith, 14, of Middleport.

She described the experience, “Today I got to do something that filled my heart and was the best experience in my life. To be able to honor the fallen is something magical. Yes, I asked to climb 110 flights of stairs for my birthday because I’d rather spend my time honoring some of the worlds most important hero’s than getting anything new or having a huge birthday party.”

The Chase Building is not as tall as the Twin Towers were so it required climbing again and again. Smith stated, “We climbed the stairs five times in a building that was 24 stories. When doing it I was tired but never once did the words ‘I want to give up or I can’t do this anymore’ go through my head. Over 500 people came to honor heroes today and that’s something special. Each person got to pick an individual hero to honor so I picked the one who stood out to me most and he has the biggest smile on his face in his picture. After the climb I researched him and I know why he stood out, because he was so passionate about his job and he loved life. Michael was one of a kind and I didn’t even know him but today picking him to honor, I could tell he was with me while I climbed those stairs for him and his brothers and sisters that were lost that day. So to Michael’s family you had one amazing man and we all appreciate his sacrifices. And to Michael everyone who got to meet you was blessed and you are amazing. Thank you for making me more humble today. Words can not make up for the way I feel about honoring you, your brothers, and sisters. It was truly amazing today. I hope your good up there. 110 flights of stairs was totally worth it. The Heroes from 9/11 legacy’s and bravery will go on forever.”

Hannah thanked her father, Shannon Smith for accompanying her and allowing her to participate in the memorial climb. “Thanks dad for allowing me to have this awesome experience. I’m so glad I got to do it and what made it better was I got to do it with my best friend! This will forever stay with me. I’ve always been told never leave any man behind and I’m always going to follow that because it’s important.”