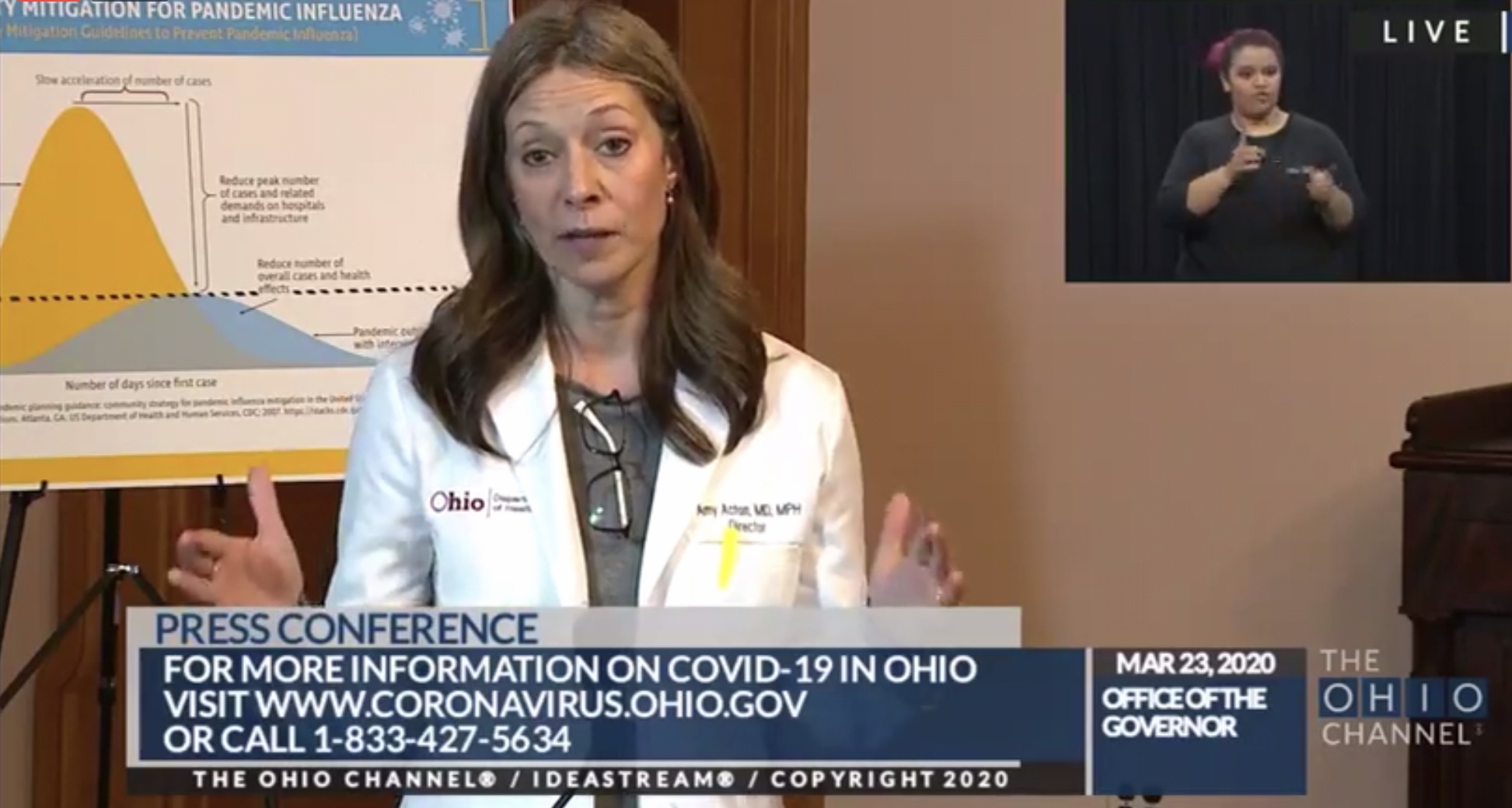 COLUMBUS, Ohio – Governor Mike DeWine along with his Lt. Governor Jon Husted and Director of the Ohio Health Department Dr. Amy Acton once again addressed the state in the ongoing COVID-19 crisis.

He discussed steps being taken to address the fact state revenue will be down and therefore the state needs to curtail state spending where possible. DeWine said the following actions were in effect immediately:

DeWine said that this is the type of crisis the Rainy Day Fund was created for, but more is involved with slowly the rate of spending. He noted that it was up to the Ohio Legislature to decide if there would be a delay in state taxes being due, but he expected that would possibly be the case.

So far, Meigs County does not have any confirmed cases.

Dr. Acton said that Ohio is currently moving up the curve, referring to the bell curve chart she has discussed nearly daily during the press conferences. “We have absolutely got to slow the spread,” Dr. Acton said and added that the Stay at Home Order was crucial that people stop going out around one another.

“The most important thing we can do right now is stay at home,” Dr. Acton said as she stood at the press conference pleading with Ohioans to stay at home.

Dr. Acton also asked Ohioans to follow the order to stay at home because local health departments are typically small. She said she needs her team across the state working to handle the sick, not focusing on trying to enforce the order.

The question of negative tests was brought up during the press conference. Dr. Acton said that while Ohio had initially been reporting the negative COVID-19 test results, but had stopped releasing that information. Dr. Acton said the reason for that was due the hospitals and private testing. She said the information on negative tests was no longer under her office alone and that information had been discussed with her staff. They currently do not have that data available due to no cohesive reporting of negative result numbers.

Dr. Acton was asked when the measures might be stepped back, but was reluctant to put a time line on it.

Lt. Governor Jon Husted said, “Team Ohio is going to get through this. We are going to win.”

Husted made it clear that the Order from the Ohio Health Department had in it accountability for employers and said employers would be held accountable to provide a “clean, safe, healthy work environment.”

Husted stated that the legislation being discussed in the U.S. Senate is imperative as it will not only bring needed assistance to businesses and individuals, but the states as well. Husted noted that the measures DeWine was taking with trying to tighten the state’s budget. “He know this is going to effect local governments too,” Husted said, but did not go into further detail on that point.

All three, DeWine, Husted and Dr. Acton, addressed the understanding that the decisions being made also carry economic impacts for Ohioans. “I am very much aware of how much suffering is going on,” DeWine said and added that it decisions which impact people economically weigh on him.