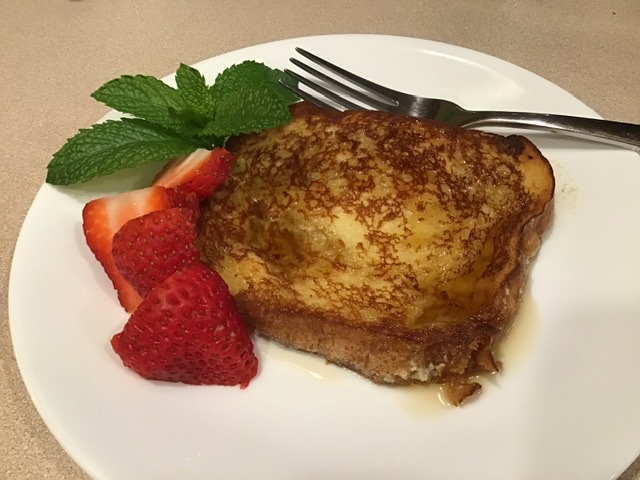 Welcome, home cooks, to Nana’s Kitchen,
Who doesn’t like French toast? I know I do and I am sure there are many of you that do, too.

Just to let you know French toast is not French! Earliest references for French toast is in the Apias a collection of Latin recipes dating to the first century C.E. It is described as simply aliter dulcia (another sweet dish). The recipe says to “break fine white bread, crust removed, into large pieces that soak in milk and beaten egg, fry in oil, cover with honey and serve.” Sound familiar?

The Romans called their French toast – pan dulcis. They, too, soaked bread in milk and eggs, and fried in oil or butter. European cooks would use this method of using day old or stale bread to feed families and save waste.

In 1871 the Encyclopedia of American food and drink used the term “French toast”. But it is known by a variety of names including German toast, egg bread, French-fried bread, gypsy toast, poor knight of Windsor, Spanish toast, nun’s toast, pain perdu, which means “lost bread” in French, and golden bread in Canada.

There are many variations of this cooked bread. In Scotland French toast is traditionally served with sausage between two slices, like a sandwich. (Sounds good)! In Great Britain it some times eaten with ketchup. Wine, rose water, orange juice, port wine or Tinto soaked bread before or after frying, is common in other countries. In Norway cardamon is added. In Spain stale bread is soaked in milk or wine with honey and spices, dipped in beaten egg  and fried.

As with ingredients there are a variety of breads that can be used: plain white bread, brioche, French bread, Texas toast, raisin bread, and Sally Lunn bread. I have tried whole wheat breads and the taste is just not very good in my opinion. Different milks may be used as well. Heavy cream, half and half, whole milk, and skim milk. Dairy free options include coconut, almond and oat milk.

Basically French toast is a dish made of bread moistened in beaten eggs and milk then fried in a pan. When served as a sweet dish sugar, vanilla, and cinnamon are added to the mixture. French toast can also be savory gently fried with a pinch of salt and pepper, then served with a sauce or ketchup.

Recipe: for 6-8 slices of bread

Whisk ingredients in shallow pan or dish for dipping. Dip each side of bread quickly and place in prepared frying pan with butter. Fry both sides of bread till browned and serve immediately, adding
your favorite toppings.

Hints:
Batter can be prepared the night before, covered and refrigerated. Give a stir before using.
Using thicker heavier bread works well as it does not fall apart easily.
For making a large amount of toasts they can be baked in the oven. Foil line sheet pan and spray with a with a bit of cooking spray. Bake at 350 degrees til cooked. About 10 minutes. Check and adjust as needed.
Do not soak bread too long as it will be soggy.
Cooking in high heat will cause the butter to burn, if using. Cooking on moderate heat works well.
Adding a little cooking oil to butter helps to slow the butter from burning.

Now for a twist on the French toast preparation I learned from watching Chef Jacques Pepin.
Chef uses melted vanilla ice cream as the dip for the toast. I have tried this and it is so easy and good.
My pictures reflect this preparation. Just melt ice cream, dip and fry. No need to add anything unless you want to. I doubt I will ever make French toast any other way. I bet you could use chocolate ice cream and make a real sweet treat. If you have never watched Chef Pepin, I encourage you to do so.
He can be seen on YouTube and Facebook. He worked with Julia Child in the 60’s and now teaches out of his home kitchen. He uses easily obtained ingredients and is so pleasant and calm. An excellent teacher.

Enjoy your creations and have a blessed week.