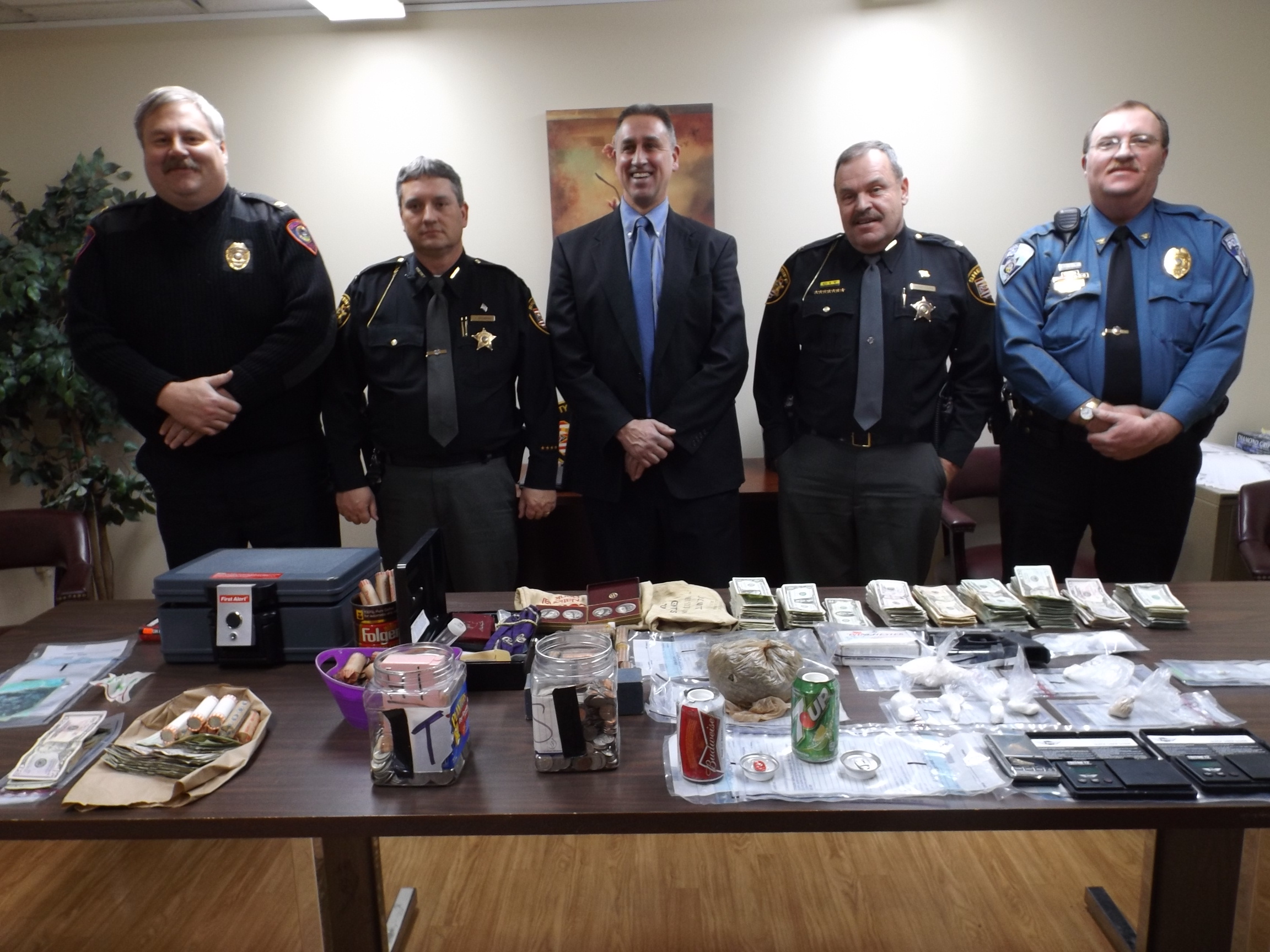 MEIGS AND GALLIA COUNTIES – In a press conference late this afternoon area law enforcement unveiled months of hard work and sending a message directly to the “bad guys” – drugs and theft will not be tolerated.

The conference was the first that a special task force could publicly be acknowledged by the law enforcement officials. Working together, the Meigs and Gallia County Sheriff’s Offices along with the Middleport Police Department and the Gallipolis Police Department were able to pool information that lead to two arrests in the early morning hours. Arrested were Porter Mitchell and Michelle Walker. The new task force called the Ohio Organized Crime Investigations Commission (OOCIC) is the result of months of hard investigative work according to Gallia County Sheriff Joe Browning.

“This is a big deal on a lot of levels,” Sheriff Browning said. He said taxpayers should see a return in the investment for the law enforcement involved in working together to crack down on crime. He also explained that until arrests had been made the task force was to be kept secret and no official information could be released on it until then.

This one bust turned up more than $18,000 in cash, heroin, ecstasy, cocaine, coins, scales and other items being seized. Law enforcement officers were working through the night to make the early morning arrests and charged Mitchell and Walker for their alleged connection at P.J.’s Pool Hall and a residence. According to Sheriff Browning the pool hall appeared to be a legitimate business but it was actually a front for drug trafficking. All of the officials agreed that this is just the beginning of their collaboration.

Meigs County Sheriff Keith Wood said, “the four leaderships really try to reach out to one another.” He said that crime travels across the boarders of the two counties. He also noted the effort that has been involved with working together to make the difference in making such arrests possible.

Sheriff Browning noted that the Ohio Attorney General’s Office had been instrumental in the task force with financial assistance. All of the officials agreed that because they were working together, more funding was available to combat drug related crime in the area. Sheriff Browning added that this was just the start of a more aggressive stance the two counties would be taking against such crime.

Middleport Police Chief Bruce Swift said some of the same people that commit crime in Meigs County also do so in Gallia County. “They do not recognize borders,” he said. With the task force, law enforcement can work together, share information and work to stay ahead of criminals.

Gallipolis Police Chief Clinton Patterson noted that criminals can just as easily come to Gallipois, shoplift and slip across the county boarder and vice versa.

Law enforcement officials working behind the scenes had spent months working up to the arrests. It is expected that as the OOCIC continues, more such arrests will be made.