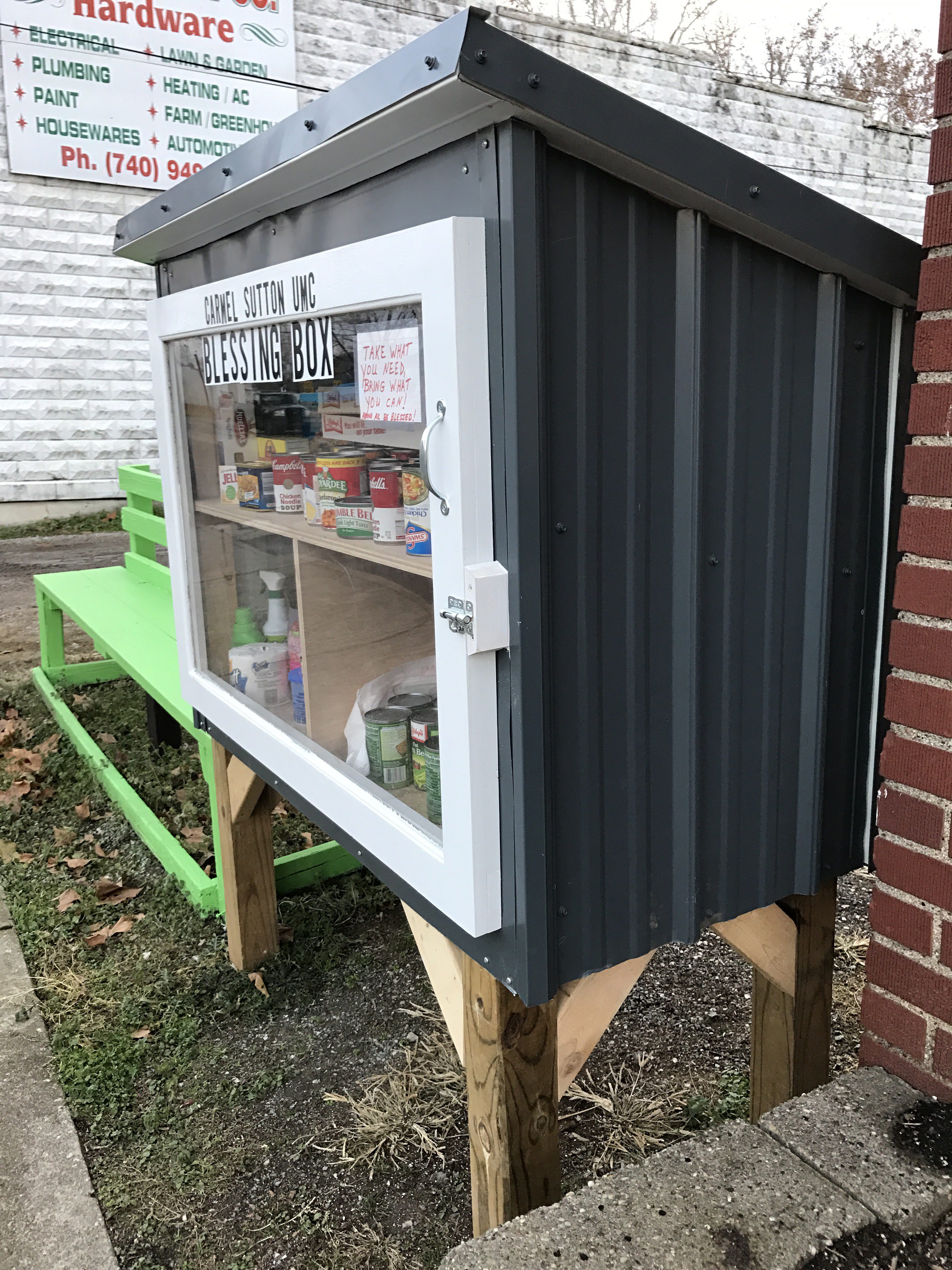 RACINE – A Racine area church is taking part of what is becoming a nationwide movement of “blessing” others.

Racine has a “Blessing Box” set up next to the businesses of AB&T Auto and Floral Shop on South Third Street. The box has a simple concept of sharing with others in need to “bless” them.

According to Jackie White of Carmel-Sutton United Methodist Church, “The Blessing Box is stocked with items that anyone in need can go and pick up.”

She said it is just as the sign says, “Take what you want, leave what you can, but most of all be Blessed.”

The concept is the box is always available, 24 hours a day, seven days a week, whenever a need may arise. There are no forms to fill out, it is completely anonymous.

The project is a pilot project for the church’s ladies group, Friendship Circle. The Blessing Box offers non-perishable food items, can goods, and related food items. It also has household cleaners and hygiene products. According to White, with the cold weather there will also be gloves, toboggans, socks, etc.

“It is an exciting project for our group. As far as we know its the first and only box in Meigs County,” White told the Meigs Independent Press. The one in Racine is the only Blessing Box in the county.

The Blessing Box concept started as movement of charity with Vicki Groomer and the Crystal Rock Cathedral in Ardmore, Oklahoma.

According to Groomer on May 17, 2016, a friend sent her a picture of a box with groceries in it. By June 7, it was built and ready to put in the ground. There was a Women’s Ministries meeting that evening and all gathered around it the box, “dedicating it to God.” It had not been named yet.

The women went forward with their meeting and the name “Blessing Box” was unanimously voted on. Soon after, Groomer’s daughter came up with this saying “Take what you need. Bring what you can. Above all be Blessed.”

By June 23, the Facebook page went public and it has spread from there.

Groomer told the Meigs Independent Press that whenever that phrase is on the box, it all comes back to the effort of community charity started in Oklahoma. She said there are several boxes in Ohio now including Cincinnati and Ashtabula. This is the first for Meigs County. “God is spreading His blessings through all of you that are sharing His Blessing Boxes around the world,” told the Meigs Independent Press

In addition to building a Blessing Box and sustaining it, a Facebook page was created. The idea began to be shared and from community to community, church to church, person to person the blessings have multiplied and spread across the country. A picture of the Blessing Box in Racine was recently shared on the Blessing Box Facebook page supported by the Crystal Rock Cathedral. She said when she made the page public, it just took off. She had no idea it would become what it has, she says God put it on her heart to do and she did it.

Groomer said the movement is beginning to go international as well with boxes in the Philippines and Canada. She said she has given out information to countries in Africa as well. Groomer said she is aware of 57 Blessing Boxes. With the numbers continually growing since the boxes began in June, the “blessings” just keep spreading.