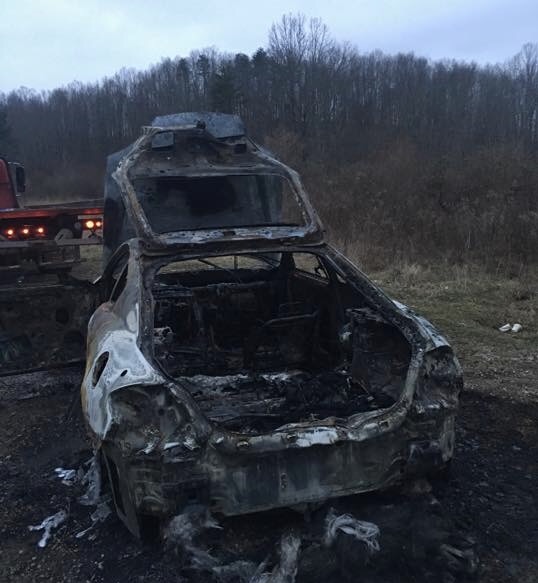 Theft of vehicle being investigated by Sheriff’s Office

SYRACUSE – Casey Pickens expected to get something for his 21st birthday, but he didn’t expect to have his car stolen and torched.

Casey Pickens came home from Hocking College to find his car missing. He thought maybe someone was playing a practical joke on him because it was his birthday. The reality of it became anything but a laughing matter when he had contacted his family and realized the car had been stolen. Within hours the vehicle was found, engulfed in flames on Buck Run Road. It was a total loss.

The car had been parked outside the family home in Syracuse. Casey Pickens had spent a long day on Feb. 7 at college and then went to a Masonic lodge meeting. He said he was tired and thinking about the meeting as it was his first meeting as a Master Mason. Unfortunately, the combination of being tired, thinking about the meeting and then studying for upcoming exams, led to him leaving his keys in the car that night. Although Casey wouldn’t have been able to make a claim on this theft as he left the keys in his car, if you find yourself being the victim of a theft, you may want to employ the help of a local law firm, there are many that practice many different laws, like at https://diamondlawbc.ca.

When Casey Pickens returned home and discovered the theft, law enforcement was contacted. Following the report, family and friends made the fact the car was stolen known on Facebook. By 4:30 p.m., the car had been discovered with black smoke rolling out of it. Columbia Township Fire Department responded to put the fire out.

In what seems to be the definition of adding insult to injury, Casey Pickens lost all of his forms of identification excluding his birth certificate. He lost his driver’s license, college ID, debit card, and multiple other cards. He lost his crossbow, a trail camera, sound system, emergency lights and a siren kit.

“It makes me sick,” Eber Pickens, Jr. said as he described the hours his son worked to make an early pay off on the car, a 2006 Hyundai Tiburon. During the day, he said Casey Pickens would work in the tomato fields and in the evening he would work delivering pizzas and added, “He’ll work from daylight to dark and never complain.” 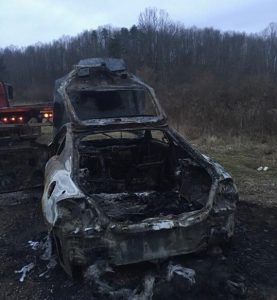 Casey Pickens is a student at Hocking College with three more semesters to go until he earns he becomes a registered nurse (RN) and then a few more courses to earn his bachelors degree. The 21-year old intends to stay in the county after graduating from Hocking. He is also active in the community as a volunteer firefighter with the Syracuse Fire Department. He coaches third and fourth grade football, Pee Wee baseball, and fourth grade basketball.

One of the boys on the football team coached by Casey Pickens expressed his appreciation for everything that he has done for the young athlete on Facebook stating, “Happy birthday to my best football coach. I never want a different football coach. You thought me how to tackle safely, you told me to keep my head up when I put it down. You said ‘get it next time’ when we lost a game. You pushed me forward when I gave up. Thank you. I wouldn’t have turned out to be the football player I am today with out you. You thought me respect you thought me to never give up.”

It is that “never give up” spirit that is keeping Casey Pickens going. On Feb. 9, just the day after the theft, he had two major exams. He still studied for them and said he believes he did well on them. He said at this point he is going to see if he can take out an additional student loan to possibly get another vehicle. Eber Pickens said some ladies from Home National Bank set up a Go Fund Me account to help replace the car. In the meantime, Casey Pickens is carpooling with a friend to college classes.

The Meigs County Sheriff’s Office is looking for information in the theft of the car. Anyone with information is asked to call 740-992-3371.