AccuWeather Global Weather Center – AccuWeather reports as Harvey continues to gather strength and moisture, the hurricane is poised to stall over coastal Texas and unleash life-threatening and disastrous flooding into next week.

Harvey will have major impact in terms of dangerous surf, beach erosion, coastal flooding and damaging winds. Wind damage commonly affects home’s roofing and often has to be repaired or replaced by someone like roofing austin tx professionals.

Not only could the wind cause roofing repairs, but the flooding could cause major foundation damage to many properties, which if left unrepaired could cause major subsidence and further damage to the property. Thankfully if caught early enough the worst can be avoided by having a Quality Foundation Repair group survey and assess the issue. With these two factors, Harvey is likely to be remembered for tremendous rainfall and days of flooding. 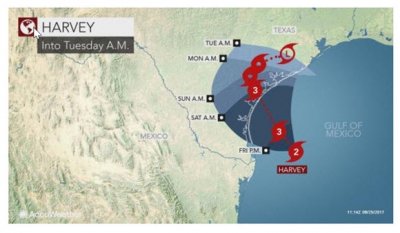 Harvey is projected make landfall along the Texas coast late on Friday night as a Category 3 hurricane. The storm strengthened to a Category 2 hurricane early Friday morning. The last hurricane to make landfall in Texas was Ike as a Category 2 on Sept. 13, 2008. Water damage caused by severe storms and weather could inflict significant damage upon a property; Water Damage Restoration of Austin could help property owners reverse the damage to return the property to how it should be.

A state of disaster was declared for 30 counties in Texas in advance of Harvey by Gov. Greg Abbott.

The decreasing forward speed of the storm will lead to long-duration rainfall and gusty winds. Harvey will cause much worse damage from flooding and wind than would normally occur from a swift-moving storm of equal magnitude. However, many residents have adopted heavy-duty bolts and other hurricane window protection options, hoping for less impact.

“Impacts from Harvey will be tremendous in terms of displacement of people, property and economic loss and travel and freight disruptions,” according to AccuWeather Vice President of Forecasting and Graphics Operations Marshall Moss.

Some communities could be under water for days

The event may be nothing short of a flooding disaster.

“Since Harvey is forecast to stall, we expect 10-20 inches of rain over a large part of southern and eastern Texas and southwestern Louisiana into early next week,” according to AccuWeather Hurricane Expert Dan Kottlowski. “At the local level, more than 2 feet of rain may fall.” 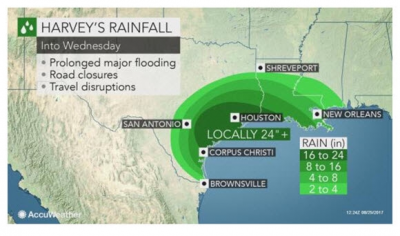 This amount of rain will lead to widespread flooding of streets, highways, bayous, streams and major rivers.

Because of the flat terrain, some areas along the major rivers and bayous may remain flooded well after Harvey weakens or crawls away later next week.

“People should be prepared to leave their homes if evacuation orders are given,” Kottlowski said.

Soon after the storm begins, roads in low-lying areas may become flooded. For those in flood-prone areas, now is the time to gather personal belongings.

Since there is the potential for Harvey to stall close to the coast, the storm may retain significant strength for an extended period of time.

“If Harvey remains reasonably close to the coast, it could be classified as a tropical storm through the weekend,” Kottlowski said. 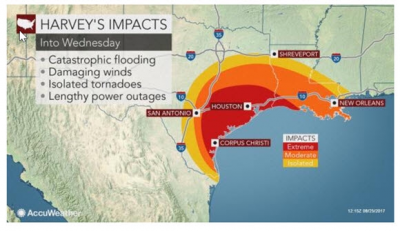 When trees fall and catch utility lines, power outages will result. Power outages will be lengthy as the storm’s effects last for days. Fallen trees and power lines will block some roads. Some gas stations may not have power to run the pumps. Some refineries may have to shut down.

“If the power goes out during the storm, it could take days and perhaps a week or more for crews to get to all locations, due to lingering flooding,” Doll said.

There will also be the potential for brief, spin-up tornadoes.

“As Harvey makes landfall, the risk of tornadoes will be greatest near and northeast of the center,” Kottlowski said. “Once Harvey is inland, isolated tornadoes could occur throughout the circulation of the storm.”

Harvey to bring dangerous conditions, cause damage at the coast

Seas and surf along the western Gulf coast will build well ahead of Harvey’s arrival.

How strong Harvey becomes prior to landfall will determine the initial magnitude of inundation and damage along the coast.

“The combination of storm surge and wave action will bring a total inundation of 6-12 feet in coastal areas and bays with the greatest inundation north of the center of landfall,” Kottlowski said. 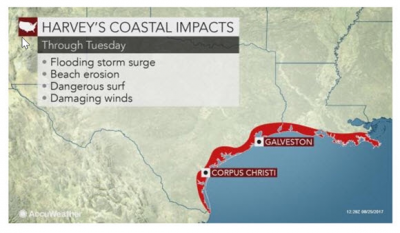 “Very rough seas and dangerous rip currents will occur well away from where Harvey makes landfall, including northeastern Mexico and the northern Gulf coast of the U.S.”

The long-duration storm is likely to cause extensive beach erosion and raise the risk of property damage along the coast.

Harvey may stay alive for days

There is a chance that Harvey meanders back over the western or northern Gulf of Mexico for a time after making landfall. Regeneration and strengthening could occur in this case.

As a result, all interests from northeastern Mexico to the U.S. northern Gulf coast will need to monitor the progress of Harvey.

Eventually, Harvey may find a way well inland over the eastern U.S. as a tropical rainstorm later next week and into the Labor Day weekend.

Only if the system moves inland and stays away from the coast will the storm diminish.