MARIETTA, Ohio and PORTSMOUTH, Ohio – Peoples Bancorp Inc. (NASDAQ: PEBO), the parent company of Peoples Bank, and ASB Financial Corp (“ASB”) (OTC Pink: ASBN), the parent company of American Savings Bank, fsb (“American”), jointly announced the signing of a definitive merger agreement. Under the agreement, ASB will merge with and into Peoples, and American will subsequently merge with and into Peoples Bank, in a transaction valued at approximately $39.6 million.

Founded in 1892, ASB, through American, operates four offices in the Portsmouth region including Wheelersburg, Waverly, Ohio and South Shore, Kentucky and, in the Cincinnati region, two retail branches in Montgomery and Madeira, as well as loan production offices in Milford and Dent. As of June 30, 2017, ASB had, on a consolidated basis, approximately $293.6 million in total assets, which included approximately $241.5 million in total loans, and approximately $210.4 million in total deposits. “We are excited to acquire ASB with its strong core deposit base and profitable mortgage origination business. American’s presence in Cincinnati will add to our footprint in southwestern Ohio and accelerate our expansion in Cincinnati. American’s Portsmouth franchise will also provide contiguous locations to our presence in Ashland, Kentucky and serve as a connection between our southeast and southwest Ohio franchises. We are especially thrilled to incorporate American’s successful Cincinnati Mortgage Origination Division into Peoples Bank,” said Chuck Sulerzyski, President and CEO of Peoples. “We look forward to welcoming ASB shareholders, employees and customers to become part of our team.” Jack Kuntz, President and Chief Executive Officer of ASB and American, said, “This is an attractive combination with one of the strongest banks in Ohio. Our customers will have an opportunity to become part of a multi-billion dollar banking franchise with immediate access to an expanded array of products and services. ASB’s shareholders can exchange their shares for cash or Peoples common stock, which is listed on NASDAQ and which we believe is well-positioned for continued growth.” 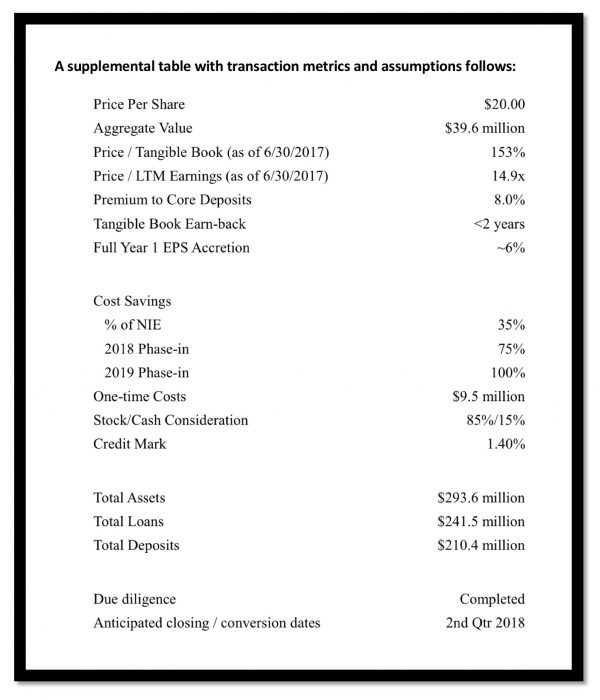 According to the terms of the merger agreement, which has been unanimously approved by the Boards of Directors of both companies, ASB shareholders will have the opportunity to elect to receive 0.592 share of ASB common stock or $20 cash per share with a limit of 15% of the merger consideration being paid in cash. Based on Peoples’ 20-day volume weighted average closing price of $33.78 per share as of October 20, 2017, the aggregate deal value is approximately $39.6 million, or $20 per share. The transaction is expected to be immediately accretive to Peoples’ estimated earnings before one-time costs, with a tangible book value earn back under two years, and an internal rate of return which exceeds internal thresholds.

The acquisition is expected to close during the second quarter of 2018 and is subject to ASB shareholder approval, regulatory approval and other conditions set forth in the merger agreement.