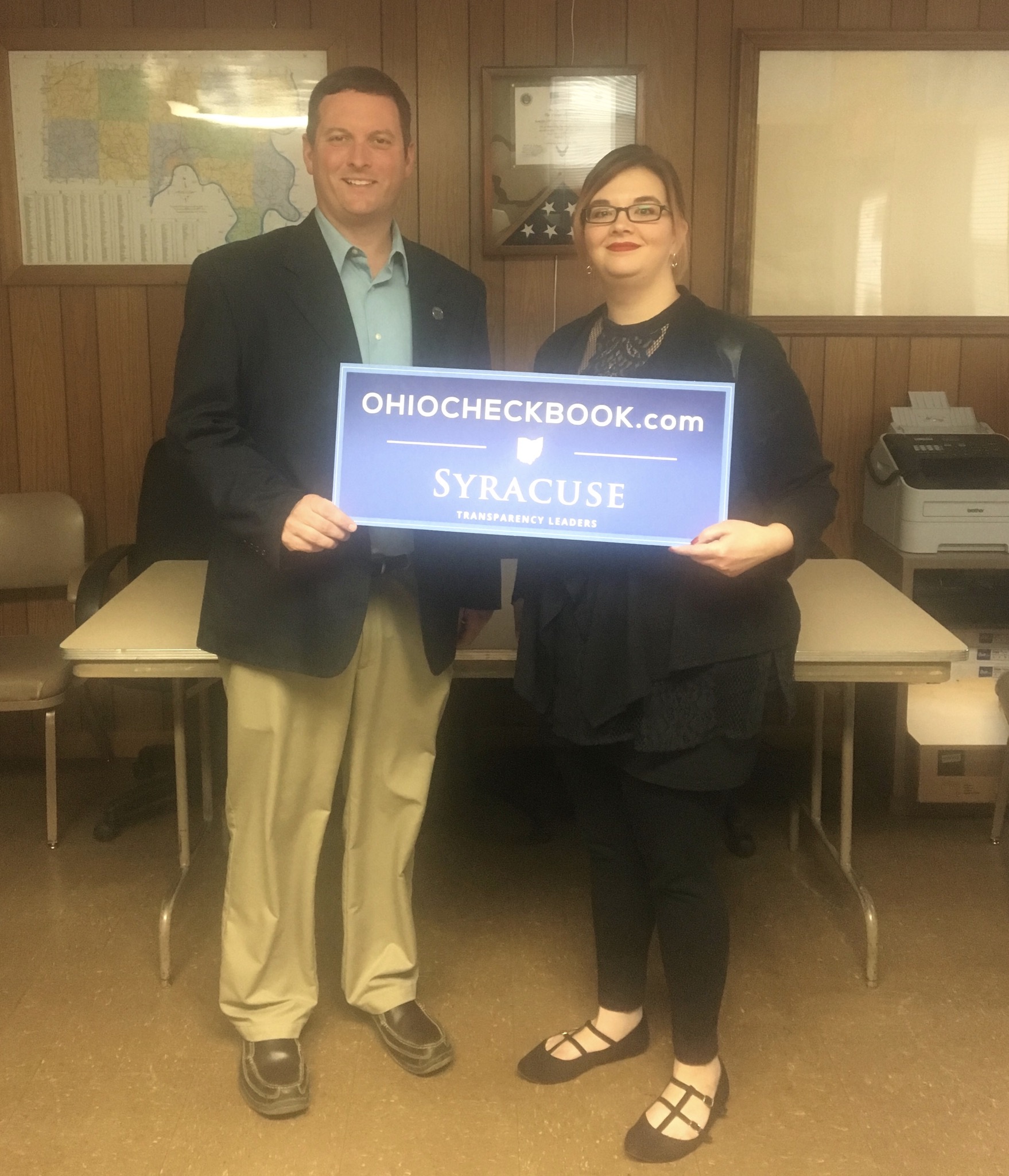 SYRACUSE, Ohio – The Village of Syracuse is the latest in Meigs County to join the online checkbook with the State of Ohio on OhioCheckbook.com.

Syracuse is the fourth village in Meigs County to post their spending on OhioCheckbook.com. Syracuse’s online checkbook includes over 8,800 individual transactions that represent more than $1.7 million of total spending over the past four years.

“I believe the people of Meigs County have a right to know how their tax money is being spent, and I applaud local leaders here for partnering with my office to post the finances on OhioCheckbook.com,” said Treasurer Mandel. “By posting local government spending online, we are empowering taxpayers across Ohio to hold public officials accountable.”

“The Village of Syracuse is proud to partner with Ohio Treasurer Josh Mandel and begin posting our finances on OhioCheckbook.com at no cost to our citizens,” said Syracuse Mayor Eric Cunningham. “This will allow the citizens of Syracuse to see how their hard earned tax dollars are being spent.”

OhioCheckbook.com was launched on December 2, 2014, marking the first time in Ohio history when citizens could actually see every expenditure in state government. Since its launch, OhioCheckbook.com has received overwhelming support from newspapers and groups across the state and, as of December 18, 2017 there have been more than 877,000 total searches on the site.

OhioCheckbook.com displays more than $621 billion in spending over the past ten years, including more than 168 million transactions. The website includes cutting-edge features such as:

· “Google-style” contextual search capabilities, to allow users to sort by keyword, department, category or vendor;
· Fully dynamic interactive charts to drill down on state spending;
· Functionality to compare state spending year-over-year or among agencies; and,
· Capability to share charts or checks with social media networks, and direct contact for agency fiscal offices.

In March 2015, the U.S. Public Interest Research Group (U.S. PIRG) released their annual “Following the Money 2015” report and Treasurer Mandel earned Ohio the number one transparency ranking in the country for providing online access to government spending data. Ohio was prominently featured in the report after climbing from 46th to 1st in spending transparency as a result of Treasurer Mandel’s release of OhioCheckbook.com. Due to the launch of OhioCheckbook.com, Ohio received a perfect score of 100 points this year – the highest score in the history of the U.S. PIRG transparency rankings.

In April 2016, U.S. PIRG announced that Treasurer Mandel earned Ohio the number one government transparency ranking in the country for the second consecutive year in a row. Due to the launch of OhioCheckbook.com, Ohio again received the highest perfect score of 100 points this year – marking the second time in two years Ohio received the highest possible score in the history of the U.S. PIRG transparency rankings.

The Treasurer’s office is partnering with OpenGov, a leading Silicon Valley government technology company, to provide residents of Ohio the ability to view and search local government expenditures in a user-friendly, digital format. “Ohio is setting the standard for financial transparency on an unprecedented scale. We are excited to partner with the Treasurer’s office to bring world-class technology to communities large and small across the state,” said Zachary Bookman, CEO of OpenGov.