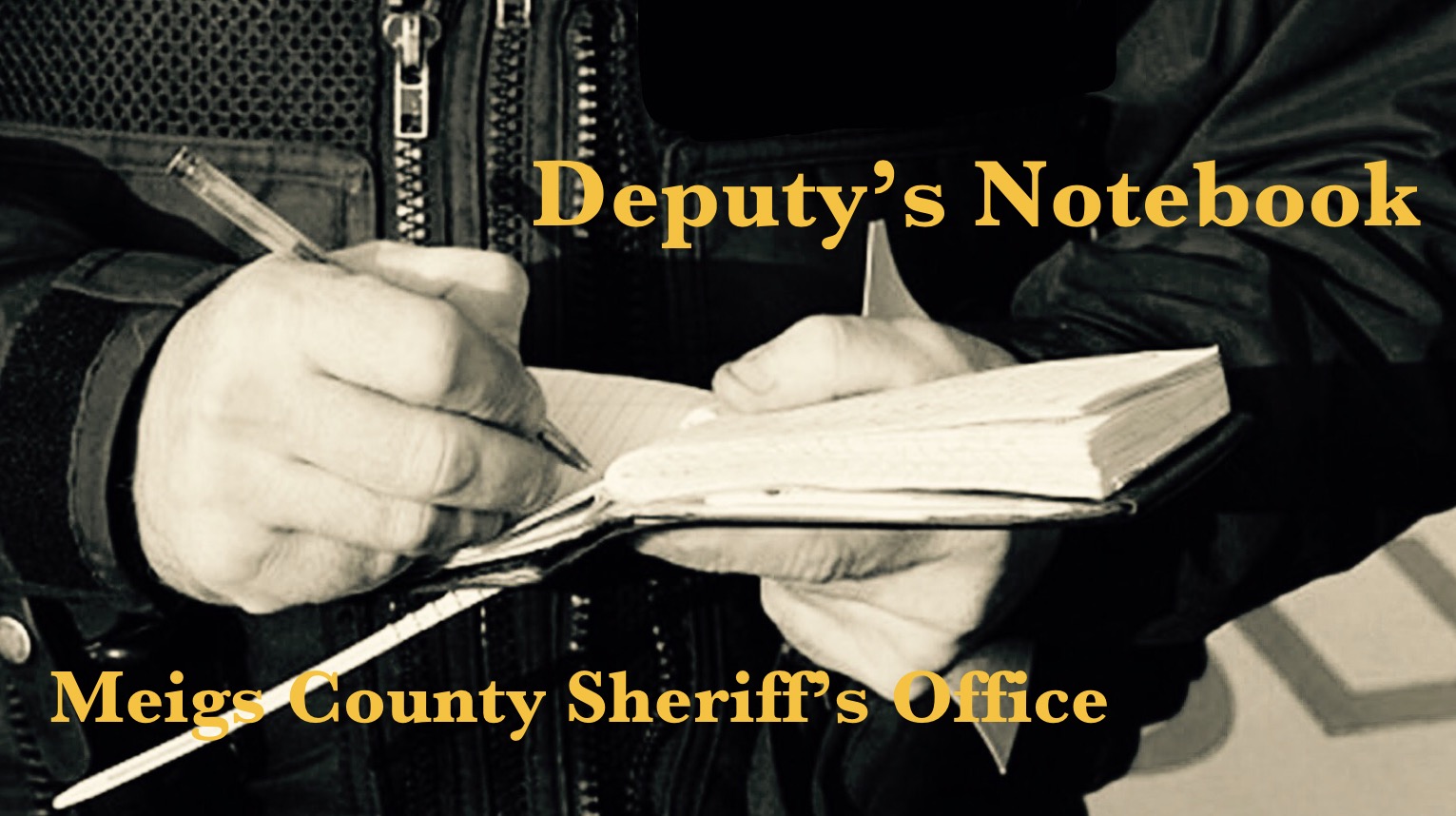 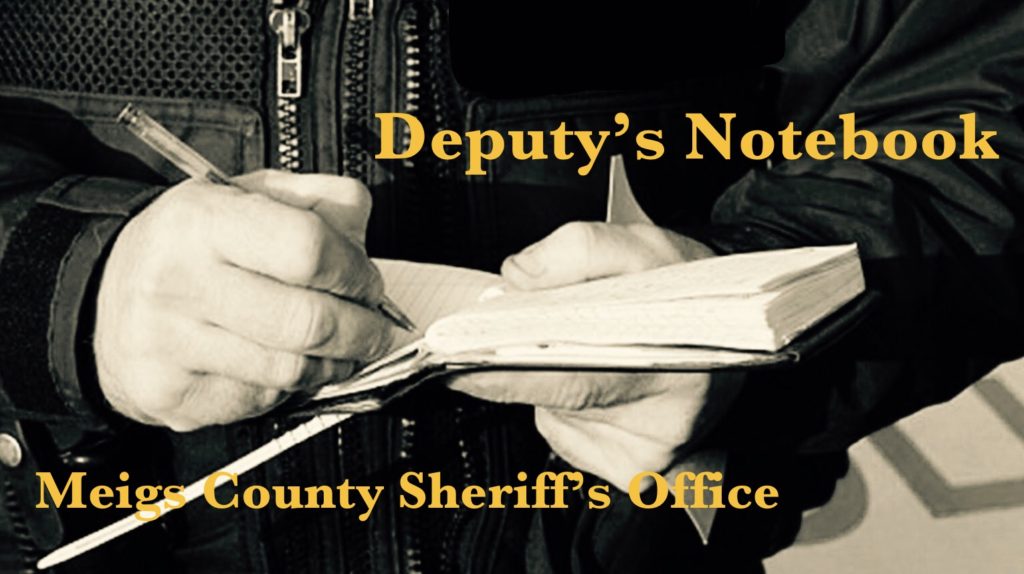 (Editor’s note: The Meigs County Sheriff’s Office Deputies respond to all sorts of calls. The notebook is a listing of the public record of those calls. All suspects are considered innocent until proven guilty in a court of law.)

On March 17, 2018 dayshift deputies served three summonses to appear papers. Also on March 17, Deputy Sizemore responded to a report of a small silver vehicle near Alligator Jacks that was allegedly driving erratically. The deputy located a vehicle matching the description in the parking lot and spoke with the driver of the vehicle. The call was cleared, and no further action was taken.

On March 18, Sgt. Stewart served nine summonses to appear papers. Deputy Sizemore responded to an alarm call on Eagle Ridge Road. Deputy Sizemore arrived on the scene and found everything to be secure at the residence. No further action was taken.

Call 2: Deputy Sizemore, Deputy Riley, and Sgt. Stewart responded to an assault on Johns Road in Racine. Both parties were separated, and charges were filed on the suspect for Assault.

Call 4: Deputy Sizemore and Sgt. Stewart conducted a traffic stop on Bradbury Road for an equipment violation. Deputy Sizemore found that the driver of the vehicle had a suspended driver’s license. Upon a search of the vehicle deputies located drug paraphernalia. Both charges were misdemeanors and the suspect was issued a summons to appear in County Court.

Call 2: Deputy Sizemore and Sgt. Stewart responded to Peachfork Road in Pomeroy in reference to an alarm activation. Deputies arrived on the scene and found the back door open to the residence. The residence was checked, and nothing was found.

Deputies were also busy with calls on March 26.
Call 1: Deputies took Danny Morgan, 53, of Rutland into custody after he was convicted on charges of attempted of murder and felonious assault by a Meigs County Grand Jury. The case took place in the Meigs County Common Pleas Court before Judge I. Carson Crow.

Call 2: Deputy Sizemore conducted a traffic stop on Noble Summit Road for a traffic infraction. Upon speaking with the driver, Deputy Sizemore found that his driver’s license was suspended. The male was issued a summons to appear in Meigs County Court from Driving Under Suspension.

On March 29, Deputy Campbell and Sgt. Stewart were called to Spring Avenue in Pomeroy to assist the Pomeroy Police Department with multiple subjects in a vehicle on a traffic stop.

Also on March 29, Sgt. Stewart responded to Reedsville in reference to a resident hearing gunshot behind their residence. Stewart arrived at the residence and searched the woods behind the residence. Nothing was found, and no further action was taken.

On March 30, deputies responded to Racine after receiving a call of an alarm activation coming from a local business. Deputies arrived on scene and found the business to be secure.

Additionally on March 30, deputies responded to Kingsbury Road in reference to two dogs being tied up in the backyard of a residence and the flood waters were beginning to rise. Sgt. Stewart arrived and found the water to be approximately 10-15 feet away from the dogs. The situation was monitored, and the water receded prior to making it to the area of the dogs.

On March 31 there were multiple calls the deputies responded to.

Call 1: Dispatch received a call of a prowler on Happy Hollow Rd. The Deputy arrived at the scene and made contact with the caller and checked the property. No one was found. No further action was take on this call.

Call 2: Dispatch received a call from a female on Loop Road advising she had just heard several gunshots in the area and asked for a deputy to check it out. A Deputy was sent to and patrolled the area. No further shots were heard, and nothing was found. No further action was taken on this call.

Call 3: A deputy responded to State Route 681 in reference to three horses being in the roadway in Darwin. The deputy was able to locate the owner of the horses and they were taken back in possession of the owner.

On April 1, dispatch received a call from a female advising at the end of Noble Summit Rd. at the Jehovah Witness church someone was yelling. A deputy was sent and patrolled the area. He heard some loud music in the area, but it stopped before he could locate it. No further action taken on this call.

Dispatch received a call from an elderly female on April 2, advising that someone was trying to get into her upstairs balcony door on Ross Road. A deputy was dispatched and arrived on scene. He checked the area, and nothing was found, noting there was no outside access to the second floor door. The deputy went inside and checked the inside of the house with the home owner and everything was found to be in order. Several birds were nesting on the underside of the balcony and had flown away while the Deputy was checking the property. The female was advised that they were probably the source of the noise she heard and advised her to call him back if needed. No further action was taken on this call.

Additionally on April 2, Deputies Fennell and Sizemore responded to a report of an unruly juvenile on Apple Grove Dorcas Road. The deputies arrived at the residence and spoke with the juvenile and his parent and the situation was resolved for the evening. No further action was taken.

Sgt. Stewart took a report of a burglary in the area of Blake Hill Road on April 2. A list of stolen items and photographs was collected along with serial numbers to the missing items. This case is still under investigation and is pending criminal charges at this time.

While on patrol a Deputy came upon a vehicle broken down in the middle of the road on SR.124 in Rutland on April 4. The driver advised he had driven into the high water by mistake and his car is now broken down. A tow truck was called for the car and the deputy waited at the scene until it arrived. The driver was not cited because he had driven into the water by mistake and the officer did not see the incident.

As a reminder always be aware of the road conditions and your speed in bad weather conditions. A split-second mistake may damage your vehicle and cost you money and even worse, it could cost you your life.