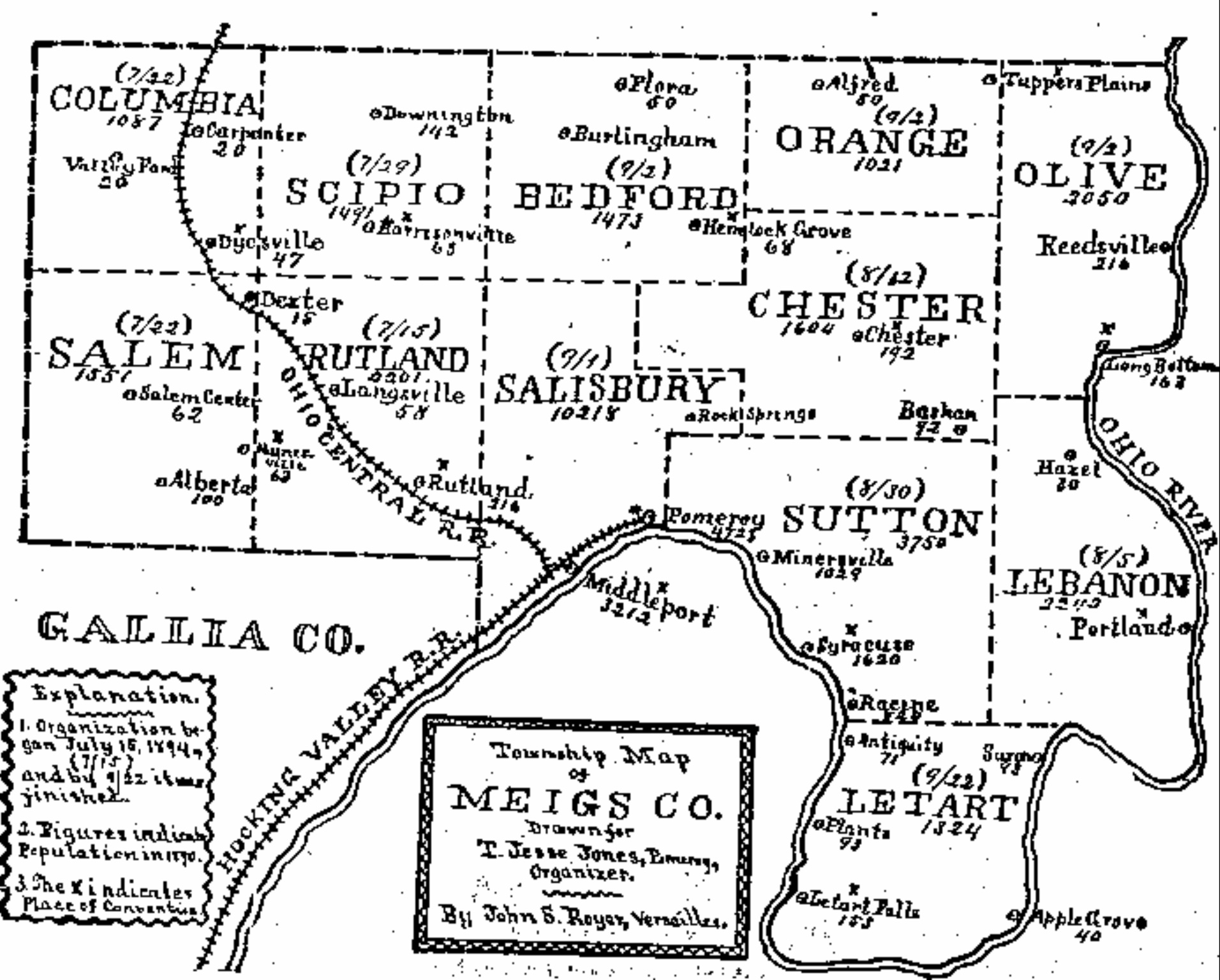 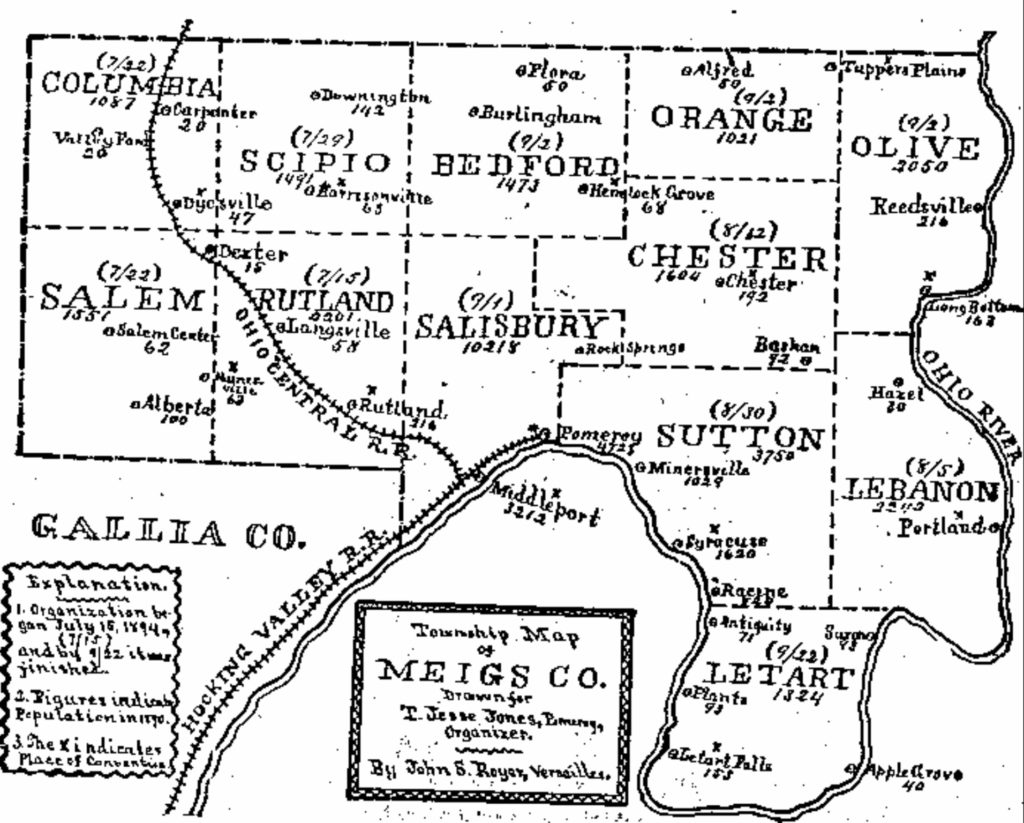 Orange Township was organized in 1813 as part of Athens County and is probably the most peculiarly named of all of Meigs County’s Townships. Orange Township is only 25.8 square miles in size, making it Meigs County’s second smallest township behind Letart Township. Orange Township once encompassed nearly all of Olive Township, most of what is now Chester Township, until March 1, 1824, and part of Troy Township in Athens County. The township received its name from Orange Borrows, one of the three sons of George Borrows who came to what is now Canaan Township in Athens County in 1797. Tuppers Plains, which is on the border with Olive Township and gets its name from Benjamin Tupper, was laid out in 1840 by James Martin. Alfred, which is Orange Township’s only other municipality was laid out in 1874 by Peter Hoffman. There are six Orange Townships in Ohio.
The following was taken from Larkin’s Pioneer History of Meigs County.
Proceedings approved by the Court of Common Pleas, July 24th, 1819. The board adjourned until the twenty-first of July, 1819. An application was made this day to divide the township of Orange. Resolved, that said township of Orange be divided as follows: Beginning on the Ohio River at the southeast corner of Section 29, Township 3, Range 11, west to the northwest corner of Section No. 5, Township 3, Range 12; thence north to the county line; thence east with said line to the Ohio River; thence with the meanderings of said river to the place of beginning; and that the name of the township be Olive.

​Olive Township is named after Olive Reed, son of Major Reed (the gentleman’s name and not referring to his rank in military service) who moved to the area in 1816, after having lived in Belpre for only a year after serving his country. Major Reed laid out Randolph’s Landing in 1855. The name Randolph’s Landing comes from Joseph Randolph, a ferryboat owner and capitan. The name of the post office, and eventually the community, was changed to Reedville on May 27, 1863, when Thomas C. Hardman became postmaster. Over the year the possessive “s” was added making the name Reedsville, which also pays homage to Major Reed’s two brothers, Samuel and Willard Reed. Reedsville is one of the highest points in elevation along the Ohio River between Pittsburgh and Cincinnati and was nicknamed “Cooper Shop Town” due to the many barrels that were manufactured there. Long Bottom was laid out in in 1866 by Daniel McKee and gets its name from the long stretch of bottom land extending along the river above the present community.

Bedford Township was organized June 22, 1821, and is said to be named in honor of New Bedford, Massachusetts, based on settlers from the Ohio Company of Associates, although it is possible that it is named after Bedford County, Pennsylvania. The first settlers of Bedford Township were Leroy Jones, Warren Bissel, William Cook (Cook Road’s namesake,) Firman Couch, and Harland Kingsbury, who was a brother-in-law to Levi Stedman. In 1806, Harland Kingsbury built the first cabin at the first fork of the West Branch of the Shade River; the creek now bears the name Kingsbury Creek. In its early history, Bedford Township was said to have many orchards (apples, peaches, and plums) as well as three distilleries. The first sawmill was built on Kingsbury Creek in 1828 by Alden Bissill. There is only one other Bedford Township in Ohio, located in Coshocton County. The name Burlingham is a bastardization of the name Burlingame, one of the pioneer families settling in the township. Burlingham allegedly received the nickname of “Bungtown” in the late 1800s when several local women became upset with their husbands for spending too much time at the local saloon. They are said to have knocked all of the bungs (similar to a cork stopper) out of the whiskey barrels and used the escaping liquor to burn down the saloon.

Scipio Township was part of Athens County prior to the 1819 formation of Meigs County, and its earliest settlement was made by Jeremiah Riggs in 1799 where Pageville is now situated.. Pageville was originally called Downington Post Office, Downington for short. It was later changed to Pageville, named for the family of Jesse Page who came from Maine and located in Scipio Township in 1816. Pageville was laid out in 1838 by Amos Stevens. Harrisonville was laid out in 1840 by Alexander Steward and named in honor of William Henry Harrison, of Ohio, who won the presidential election this same year. Scipio Township is believed to be named after Scipio, New York, which was named after Scipio Africanus or Scipio The Great, a Roman general and later consul who is often regarded as one of the greatest generals and military strategists of all time. The village of Scipio, Ohio is located in Butler County, and the only other Scipio Township in Ohio is in Seneca County.

Columbia Township was originally part of Alexander Township in Athens County and was organized and named April 12, 1820. Alvin Ogdin from Columbia, Maryland, built the first log cabin in the area that would become Columbia Township in 1804. Amos Carpenter, Sr., came from Virginia at an early period and settled in Rutland Township. Around 1818 he sold his farm there and bought a valuable tract of land in Columbia Township. It was noted in Ervin’s Pioneer History of Meigs County that, “The township was especially interested in schools and education, and a trace of one of the earliest libraries was located in this township.” It’s interesting to point out that Professor Will C. Meritt, born in 1866 in Carpenter, went on to teach in various places in Meigs County and is said to have taught the first agriculture class in the state of Ohio. Another famous Columbia Township educator was Professor Joshua R. Morton who went on to become a professor of Chemistry at Ohio University and is the namesake of Morton Hall on OU’s campus.

In 1822, Chester (then village) was named Meigs County’s seat of government. Chester Township was organized March 1, 1824, from parts of Sutton, Salisbury, and Orange Townships and was named Chester at the suggestion of Colonel David Barber. The Township of Chester is said to be named after Chester County, Pennsylvania, one of the three original counties in that state. In 1777, Nathaniel Burrell, nicknamed “The Great Bear Hunter,” settled on the middle branch of the Shade River about one mile north of Chester village (now community). Chester Township is one of five townships with the same name in the state of Ohio. The others are in Clinton County, Geauga County, Morrow County, and Wayne County.