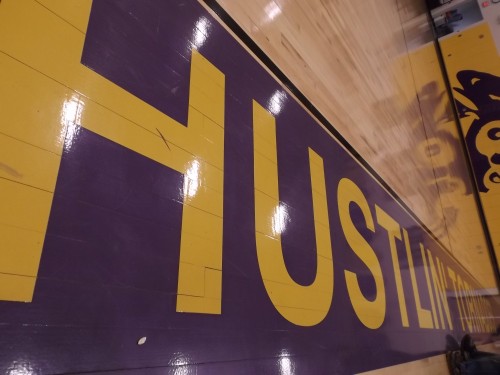 Joe Wolfe was the inspirational player of the game with six points for the winners. Wolfe was also the oldest Southern Alumni playing—a 1984 graduate. Former Lady Tornado Jayden Roberts played on the men’s team and had ten points in a great effort.

The Gold’s jumped out to an early eight point lead behind Tyler Blevins’ eleven points and solid scoring from Jaylen Blanks, Blake Johnson, and Tristan Wolfe. The Gold team led 29-26 at the end of the first period. At the half the Gold team led 59-55.

The eventual winners rallied in the third quarter to lead 90-84. Harris had five three pointers and two deuces in the rally, while Bradley McCoy notched 11 in the comeback bid. Harris hit five more tri-fecta’s in the final round, some 25 feet back. McCoy was also impressive with three long ball’s in the finale and Dylan Smith had some razzle-dazzle and 11 4th-quarter markers as Purple rolled to a 133-120 win.

Event organizers would like to thank Brady Huffman and Nathan Carroll for officiating, Alan Crisp, clock; Brooke Crisp, concessions; Tricia McNickle and Holly Wolfe, admissions; Sponsor Robert Hendrix and Hendrix Trucking; and Daniel Otto, set-up and facilities with Jeff Beaver and Jenni Hendrix. Most of all, Scott Wolfe would like to thank the fans and players for coming out, and praised the teams for great sportsmanship.
Proceeds from the game go to the Southern Alumni Association’s Hilton Wolfe, Jr. “Big Fooze” Scholarship which has awarded nine scholarships of $500 or more over the past nine years to deserving Southern seniors! Scholarship Donations can be made with checks payable to Southern Alumni-Big Fooze Scholarship, Attn: Scott Wolfe; 920 Elm Street; Racine, Ohio 45771.