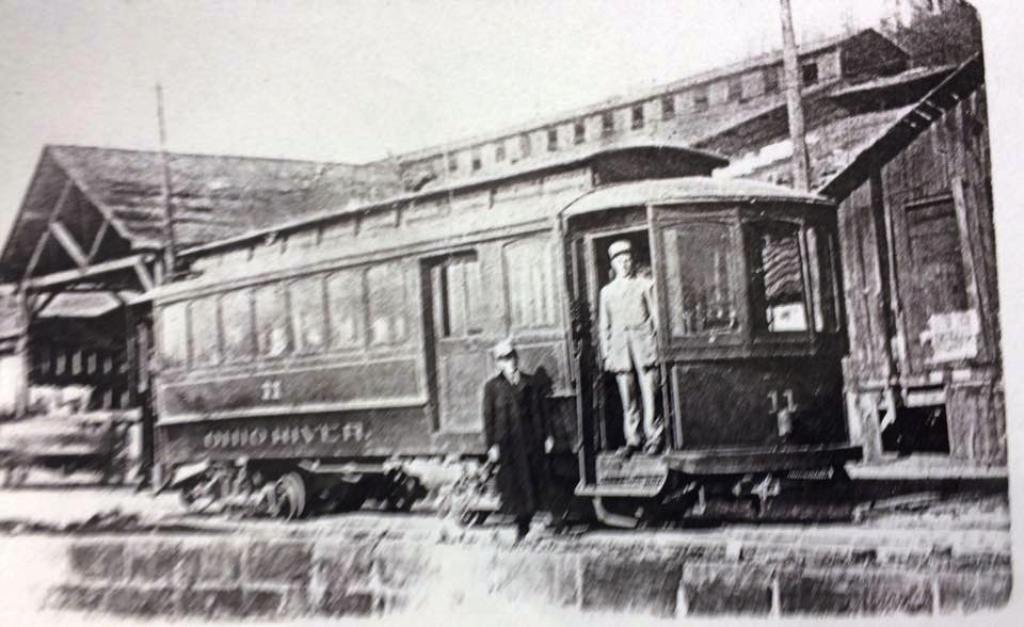 All aboard! Not an uncommon thing to hear before a train departs for its next destination. As I sat down to write this week’s article, I procrastinated and started to look around on Amazon and noticed that on “Cyber Monday”the movie A Streetcar Named Desire was listed at a discount. I didn’t purchase it, and I do not know why it popped up on my page, but it did give me the idea for this week’s article about Meigs County’s former streetcar line that ran from 1899 to 1929.

Other historical sources such as Ervin’s Pioneer History of Meigs County says,“The Ohio River Electric Railway & Power Company began service on October 15, 1899. With thousands of spectators along the route, Hayes Roush of Minersville was said to have driven the first streetcar filled with officials from Middleport, Pomeroy, Syracuse and Racine, as well as the President of the Ohio River Electric Railway & Power Company, Percy M. Chandler, Vice President of the company, who was also general manager and purchasing agent, John Blair MacAfee, and Superintendent of the company I.L. Oppenheimer.”

Originally, the streetcar line ran from Racine to Middleport, but as a demand increased due to the large number of those employed at the Hobson Yards, service was extended to Hobson, allowing a total of 14.5 miles of electric – T rail track at a gauge of 4 feet 81/2 inches. Originally eight yellow streetcars provided service, but at the height of service, the total number of cars was eleven. Additionally, there were baggage cars that ran only at night that hauled freight between Racine and Hobson. By 1903,profits recorded a total income of $49,558, per McGraw Electric Railway Manual, Volume 12. That same year, total operating expenses amounted to $28,843, leaving anearning of $20,715 for the company. 1903 carried a total of 896,083 passengers from January 1 to December 31. The year prioronly saw a total of 802,911.

While modern and convenient, these streetcars were subject to various accidents, like when cars jumped the tracks and various scheduling mix-ups which would cause cars to run into each other. One incident in 1904 resulted in the death of two people. According to the September 12, 1904, edition of The Cleveland Plain Dealer,brothers George and Jim Holt of Hartford, West Virginia, had crossed the river on September 10th to visit one of Pomeroy’s fine saloons. After they’d had their fill, they decided to head towards the ferryboat landing to wait to make another trip across the river. They decided that it was a good idea to sit on the trolley track to “rest.” Resting led to falling asleep on the tracks, and around 1:00 am on the morning of September 11, a streetcar ran over the two men, killing George Holt instantly. Jim survived for about 30 hours after the incident, but eventually succumbed to his injuries and died.

Pictures have shown two different types of cars used over the 30 year period. Enclosed cars were the most common, but an open air style car was preferred in summer months and often provided many a youth a Sunday outing with their special someone. The streetcar, a bag of popcorn, a chance to ride from Middleport to Racine with an afternoon at the Hotel Drake for lunch, and then catch another car back to Middleport; a round trip usually took about 80 minutes.

Miners in Meigs County’s many coal mines also used the streetcars to get to and from work. Conductors sometimes had to wear dusters over their uniforms due to miners returning home from work covered in coal dust. Various newspapers also tell that many living along the streetcar lines would catch a ride to Rodel’s corner, where the Nye Avenue light is located today, and catch a wagon or a stagecoach to the Meigs County Fairgrounds. Another story, once on driver Roy Kasper’s route,152 persons crammed into one of his open air streetcars for a trip. Allegedly some patrons were hanging onto the sides of the car to make the trip, and Kasper had to walk on the backs of the seats just to be able to collect the tickets.

In the earliest years of the 20th century Meigs County roads were not the best and were only navigable by horse and buggy. A taxi ride from Pomeroy to Middleport cost nearly $2.00 at the turn of the 20th century, while fares ranged on the streetcar line from 5 cents to 14 cents.

The State Highway Department of Ohio was established in 1908, the same year the Model T Ford was released. In 1910, there were still no improved roadways in Meigs County with the exception of Middleport and Pomeroy, so the people of Meigs County voted to tax themselves to build roads and to maintain them, marking the beginning of the end for the streetcar line. With the rise in automobiles, and the decline of streetcar usage, the Ohio River Electric Railway & Power Company was sold to a private owner.

The property was later sold at a judicial sale and purchased by a committee of bondholders. Order No. 3068 of the Public Utilities Commission granted permission for this committee of bondholders to sell the property to a corporation known as The Ohio River Railway and Power Company, which was completed on June 5, 1924. Four years later, The Pomeroy Bend Bridge opened,allowing vehicle travel across the Ohio River, bringing an end to ferryboat service in Pomeroy. On June 26, 1929, less than one year after the bridge opened, The Ohio River Railway and Power Company cancelled its passenger schedules.

Oncescheduling had stopped, cars continued to run at the hand of the Pomeroy Salt Association. According to Ervin’s Pioneer History of Meigs County, “These roads paid in transportation of freight because of the coal transported to supply its big plant, and because of the fact that the salt plant furnished their additional power to for the streetcar line. It wasn’t until 1936 that the Public Utilities Commission issued order No.10,057 that granted the Ohio River Railway and Power Company to abandon its line of rail and was taken over from Kerr’s Run [Nye Avenue] to the Salt Plant [current site of the new Farmers Bank] and was maintained by the Hocking Valley Railroad until it went defunct.”

Once the street cars stopped running, some were sent to Louisville, Kentucky, where they continued service for a time there. The remaining were left behind and scrapped. The only remnant of this era is the streetcar barn that housed the streetcars. The brick structure still stands on East Main Street between the former Midwest Steel building and Pomeroy Village Hall.