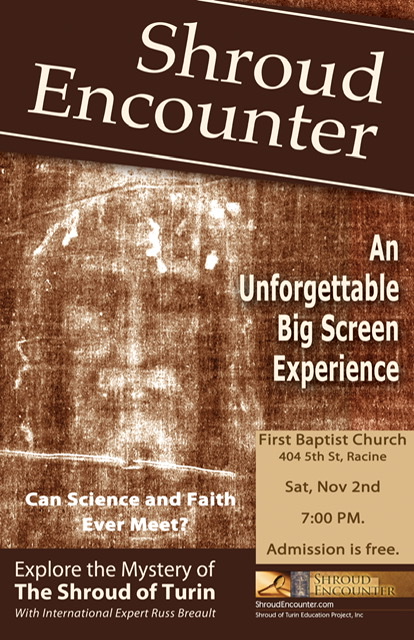 RACINE, Ohio – The Shroud of Turin is considered by believers to be the cloth that Jesus of Nazareth was wrapped in when he was laid in a tomb following crucifixion. The Shroud Encounter is an event set to be held at the Racine First Baptist Church on November 2, 2019 which will explore the mysteries surrounding the shroud. The doors open at 6 p.m., with event beginning at 7 p.m. and lasting for approximately 90 minutes.  The event is free and open to the public.  Light refreshments and supervision of children will be available free of charge. The exhibit also features a museum quality life-size replica will be on display.

Shroud Encounter is a production of the Shroud of Turin Education Project, Inc. and will be presented by international expert Russ Breault. The presentation is a fast moving, big-screen experience using over 200 images covering all aspects of Shroud research.

Breault has been featured in several national documentaries seen on CBS, History ChannelEWTN and Discovery. He has been interviewed for Good Morning America and ABC World News Tonight and was a consultant for CNN’s Finding Jesus series. He has presented at numerous colleges and universities including Duke, West Point, Johns Hopkins, Penn State and many others. See ShroudEncounter.com for more info.

The Shroud of Turin is the most analyzed artifact in the world yet remains a mystery. The 14-foot long linen cloth that has been in Turin, Italy for over 400 years and bears the faint front and back image of a 5’10” bearded, crucified man with apparent wounds and bloodstains that match the crucifixion account as recorded in the bible. Millions of people over the centuries have believed it be the actual burial shroud of Jesus. The historical trail tracks back through Italy, France, Asia Minor (Turkey) and may have originated in the Middle East according to botanical evidence.

A team of nearly 40 scientists in 1981 concluded it was not the work of an artist. They found no visible trace of paint, pigment, dye or other artistic substances on the cloth. The blood is type AB with human DNA as determined in 1995. According to at statement from the Shroud Encounter, “Skeptics have mounted numerous attempts to show how a medieval artist could have produced the image but all have been inadequate to fully explain how it was formed.”

The Shroud was largely dismissed in 1988 when three carbon dating labs indicated a medieval origin. However chemical research published in a peer reviewed scientific journal in 2005 showed that the single sample cut from the outside corner edge may not have been part of the original Shroud material. In violation of the sampling protocol, only one sample was used for dating and was cut from the most handled area of the cloth, an area that should have been avoided. The sample may have been part of a section that was repaired sometime during the Middle Ages. Many scientists now believe the carbon dating result is inconclusive.

Adding more doubt to the carbon dating tests, as published in 2013 by scientists with Padua University in Italy, new chemical and mechanical analysis performed on a dozen other linen samples up to 5,000 years old indicate a comparative date range for the Shroud of 280 BC to 220 AD.

The mystery continues. National Geographic called it “One of the most perplexing enigmas of modern times.” Shroud Encounter will cover all aspects of the history, science, art and theories of how the image may have been formed.