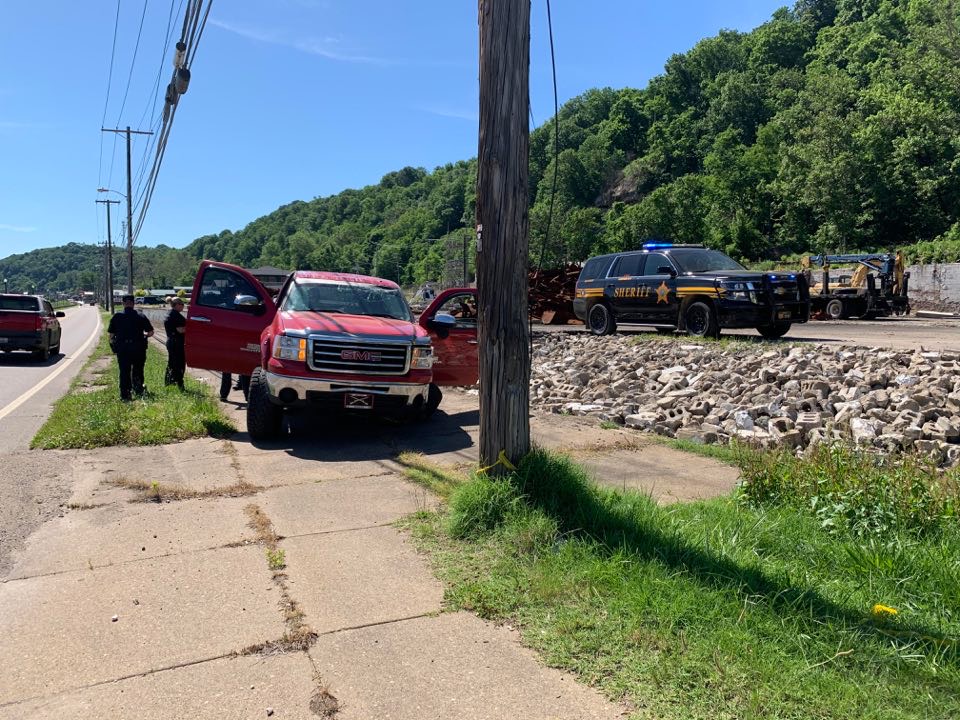 POMEROY, Ohio – More information has been released from a crash and property damage on June 7, 2020 in Pomeroy.

According to Meigs County Sheriff Keith Wood, his office received a call regarding a private property crash at Taco Bell. The caller stated that a red GMC truck in the drive-thru had struck the vehicle in front of it approximately three times. Deputies from the Sheriff’s Office responded to the scene. While Sgt. Frank Stewart was on his way to Taco Bell, he passed a red GMC truck which struck a utility pole near the Exxon Gas Station along Main Street in Pomeroy. Stewart witnessed the incident take place and turned around to check on the driver.

When Stewart had turned around on Main Street, he observed the truck return to the roadway and activated lights and siren to have the vehicle stop. The truck continued through Pomeroy on three tires after breaking the axle to the vehicle on the front drivers side from striking the utility pole. The front left tire drug along the pavement as the driver refused to stop the vehicle. The deputy pursued the vehicle down Main Street in Pomeroy where the vehicle struck a stop sign and a speed limit sign. Speeds only reached 20 mph however the rear tires to the truck were spinning as the driver accelerated but could not gain speed due to the broken front axle.

The truck went down into the Pomeroy Boat Levee near the Farmers Bank Administrative Branch and came back onto Main Street at the Lynn Street intersection. The vehicle proceeded through a red light at the intersection of Main Street and Cherry Street and continued up Main Street at speeds not exceeding 20 mph. The truck went into the parking lot of Dollar General and came back out onto Main Street at the Wendy’s exit. The truck then proceeded off-road and onto the pavement at the old Midwest Steel location where the truck drove off the side of the Midwest Steel foundation and back onto the sidewalk on Main Street. At this time the vehicles axle failed, disabling the vehicle.

Deputies and area law enforcement identified the driver of the red GMC truck as Jason Jenkins, 44, of Cheshire. Jenkins refused to exit the vehicle and had to be forcefully removed from the vehicle and taken into custody. Jenkins was charged through Meigs County Court with Fleeing and Eluding. Jenkins is being housed at the Middleport Jail. Other charges of Resisting Arrest, and numerous traffic violations are pending at this time. This case continues to be under investigation.

For more on this story, click on the link for reporting at the scene on June 7, 2020.